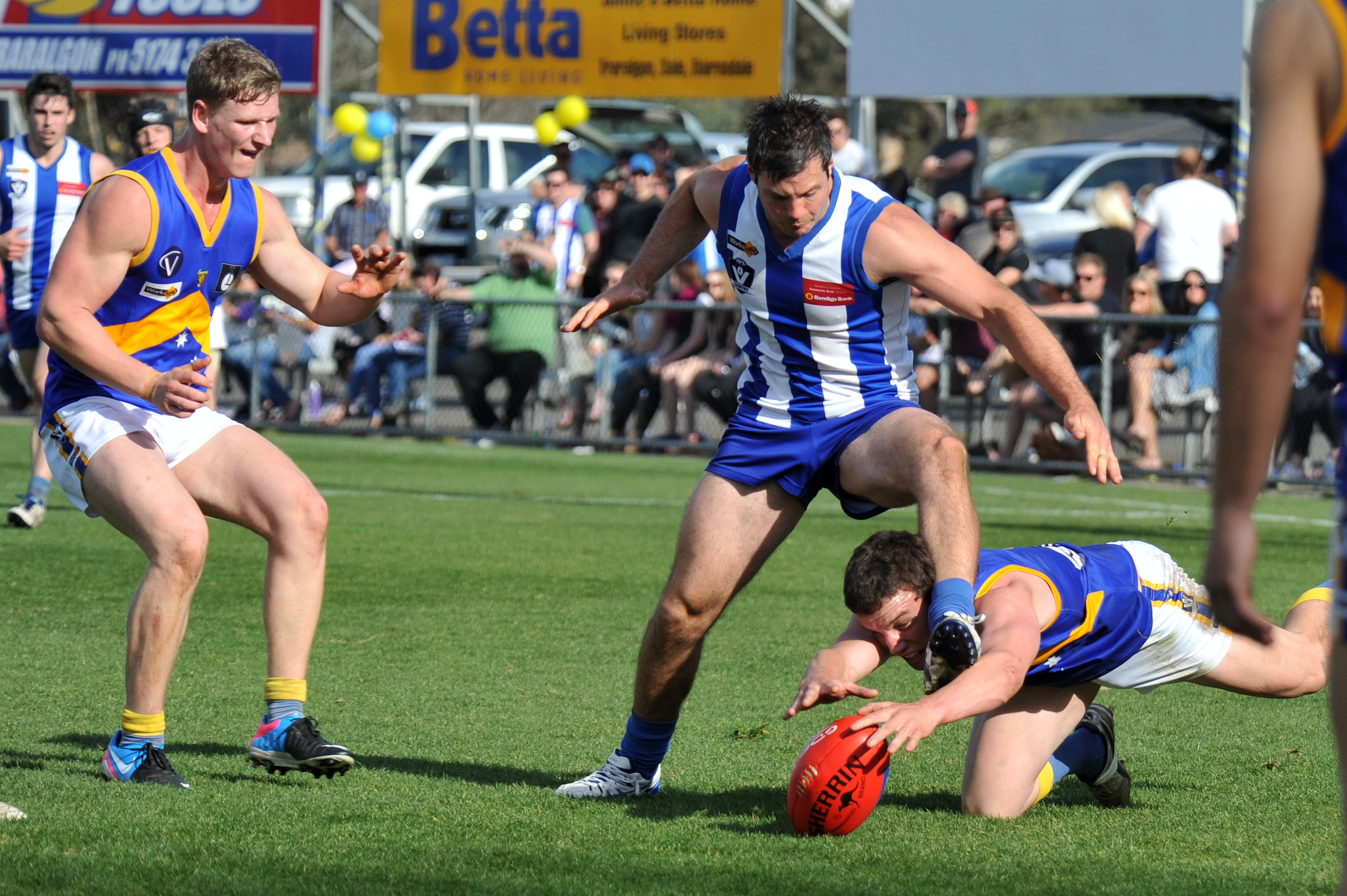 The Kangaroos had their backs against the wall but staged a stunning second half comeback to turn a 17-point deficit into a 31-point victory.

Bridesmaids for the past two seasons, the Kangaroos left the Cougars in their wake in the final term, booting 6.7 (43) to a mere two behinds.

Celebrations started early for Churchill when club president Mick Johnson and captain Chris Williams unfurled the premiership flag ahead of the big clash.

The home side marked its intentions early, slotting through the opening goal of the match through Brendan Holt after seven minutes, before Heyfield eventually replied.

A 50-metre penalty gifted Jack Woodland with his first for the afternoon and provided the Kangaroos with the momentum to add another ahead of quarter-time.

Little separated the sides in the opening half; Churchill held the upper hand in the second term with majors to Nic Campbell and Hamish Towns.

Despite their best attempts the Kangaroos could only slice seven points off the half-time deficit in an epic premiership term to trail by 10 points at the final change.

The Kangaroos then registered six straight majors to start the fourth and left the premier in the dust.

New recruit James Beha proved a wildcard for the Kangaroos; the big man won the ruck contest against Andrew Brown providing Woodland, Stubbe and Daniel Stevens with first use of the ball.

Brett Hudson was influential in directing the Kangaroos’ forward structure, recording a number of goal assists in the final term while fellow recruit Ash Duggan booted two second half majors.

Struggling to move the ball past centre half-forward, the Cougars’ final term fadeout was a disappointing conclusion to what had been an enthralling contest up until three-quarter-time.

For the reigning premiers, defender Dean DeGroot accounted for several opponents, coach Allan Chandler was the old hand in defence, Dale Patterson held his own in the midfield and Towns finished the contest with three majors.

The match was evenly placed at the first change and both sides’ desperation at the ball was evident with the Dogs taking a 14-point lead at the break.

The visitors chipped away in the second term and extended the margin to 23 points at the main break.

City’s momentum was not halted by the long change and it added a further six goals in a stellar second half.

Forward livewires Nic Grainger and Jake Milham were the main figures in front of goals, setting the impetus for victory with two goals apiece.

Dogs coach Hayden Burgiel was a valuable contributor leading from the front, new recruit Harry Kaandorp was stellar in his debut with his agility in the ruck contest a bonus while Rowan Bell was a dogged performer in the engine room.

Boasting 13 scoring shots in the second half, Rosedale’s key forwards squandered opportunities in front of goal as their wayward kicking prevented them taking a grasp of the game.

For the Blues Craig Bourne was excellent in a best on ground performance.

GORMANDALE copped the full brunt of Traralgon Tyers United at its best at home on Saturday.

The Bombers unleashed their new recruits and provided spectators with an indication as to just how well the side has evolved in the off season under new coach Jay Neagle.

The 18-goal trouncing of Gormandale catapulted one of last season’s cellar dwellers to the lofty heights of ladder leaders at the conclusion of round one.

The Bomber line-up came to life and dominated play around the ground in a blistering 25 minutes of play.

Saunders’ five goal haul was a highlight of his best on ground performance, Bombers midfielder Graham was sublime in his dominance around the contest and when pushing forward, while Hayden Hector ran all day.

The Tigers shared the goals among seven individual goal scorers, with Kapun Morris judged best a field for the home side.

SEVEN majors from Cowwarr’s Linden Brunt were among the highlights for the Saints who recorded a 40-point victory over Glengarry.

Caught flat-footed the Magpies went behind early as Cowwarr diligently went about extending the margin at each change.

The charge on the scoreboard was led by Brunt, while Pat Tainsh and Steve Cooper dominated the contests against their lesser experienced opponents.

The Saints boasted a 16-point buffer at quarter-time, one they would extend to 19 points by the main change before holding the Magpies goalless in the premiership term.

Glengarry, through best on ground Mitch Cummins, worked hard to remain in the contest, chipping away at the Saints’ three-quarter-time buffer to outscore the visitor six goals to three in the final term, but the Saints’ early run proved decisive in a 14.14 (98) to 8.10 (58) victory.