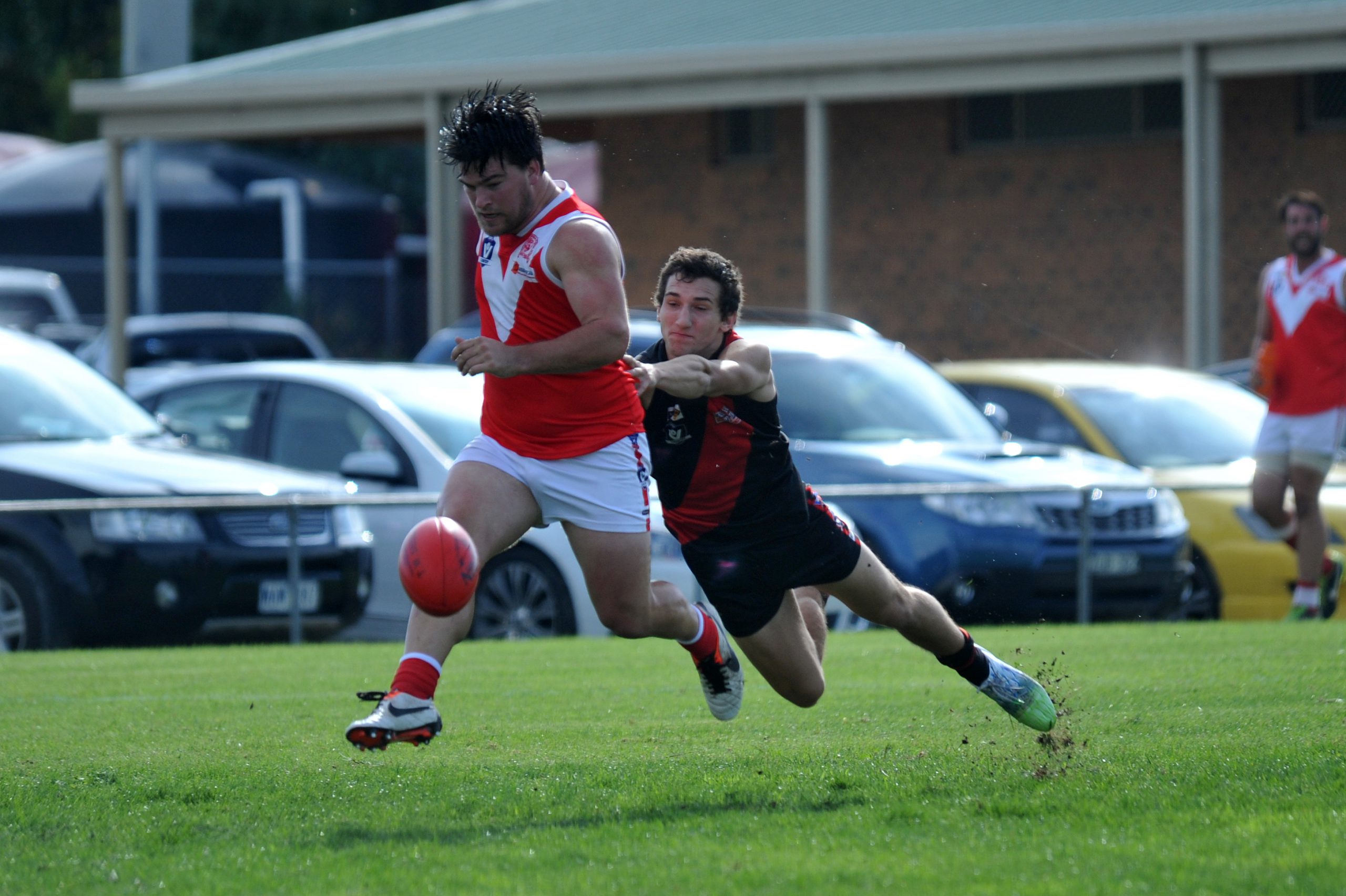 North Gippsland football’s front runners will be put to the test when the top two ranked sides meet formidable opponents under lights on Saturday.

The contest between rivals Rosedale and Traralgon Tyers United will see the two clubs pay homage to the Anzac spirit when they contest the local derby.

The concept was initiated by TTU more than eight seasons ago and is still going strong.

The day allows the two clubs to involve Traralgon RSL branch and Rosedale sub branch while also promoting the league and clubs.

With his first win under his belt, Blues coach Ben Macreadie has played in several Anzac Day clashes and knows the significance of the occasion.

“It is a massive honour to be playing on Anzac Day and one that isn’t taken lightly,” Macreadie said.

Going into the contest on the back of a 193-point thrashing of the Wildcats, Macreadie said his side would respect the Bombers.

“We will be expecting a fierce contest from a much improved TTU who are playing excellent footy at the moment,” Macreadie said.

“The opening two rounds have shown us that our good footy can match it. As a football team we are always working on the way we want to play and becoming familiar and predictable to one another’s game style.”

Boasting 15 individual goal scorers in round two, seven of which scored multiple majors, the Bombers’ back six led by general Guy Sinclair will need to be on their toes to contain the firepower of the Blues’ forward structure.

While the Blues running brigade will also prove hard to shut down, Macreadie will be aware that TTU’s classy midfield led by Brian Graham and Hayden Hector are among a dangerous nucleus for TTU.

Under lights and at home it is hard not to look past Rosedale to make it two on the run.

CHURCHILL came away with the four points to open its season account with a solid hitout against a dogged Saints outfit.

“We are always happy to get the points and Cowwarr gave us a very good run,” Cougars coach Allan Chandler said.

Saturday night will see the Cougars host the competition’s number one ranked side in an historic game for the premier, which will play its first home game under lights.

“We’re looking forward to playing the first match under lights and it’s even better that we are playing on Anzac Day,” Chandler said.

“This round we will get to find out where we are against the inform side at the moment.”

Making easy pickings of its opening clashes, last year’s preliminary finalists Sale City has shown its quality and is out to avenge last year’s loss to eventual premiers Churchill.

THE remainder of the round will take place on Sunday afternoon with Cowwarr and Heyfield to vie for the Hollands Komen Cup.

For the second consecutive week the Saints will host one of last year’s grand finalists with a tough task to stay in arm’s reach of the competition’s leading trio.

Dropping the four points in a classic tussle against the reigning premiers, the Saints are renowned for their hard and physical contests and will force the Kangaroos to work for the points.

Tested against the Tigers in round two, Heyfield remains one of three undefeated sides and will be out to continue that trend with victory over Cowwarr.

YARRAM will return home confident following a gutsy performance against TTU, despite coming away without the points.

Dishing out a physical brand of football which kept Yarram in the match until the closing stages, coach Anthony Pavey will regroup his 22 and focus on this week’s opponent Gormandale.

The Tigers bounced back from a disappointing round one showing to pull together an honourable performance against the Kangaroos.

They will need to take that same intensity and focus on the road and counteract the Demons’ many avenues to goal, break down their top class defence and shut down a fluid midfield.

The Tigers’ back six will be stretched, however the visitors will be hopeful for a strong performance from their forwards to cause a huge upset.

YET to register victory, Glengarry and Woodside sit at the tail end of the premiership standings, with both sides hopeful of providing their first year coaches with an opening win.

It was a tough week for both playing coaches with their sides’ feeling the full brunt of the competition’s best.

No doubt reeling from their opening performances, a proud Glengarry line-up will start strongly on home turf, with Woodside needing to scrap together a four-quarter effort to come away with the points.