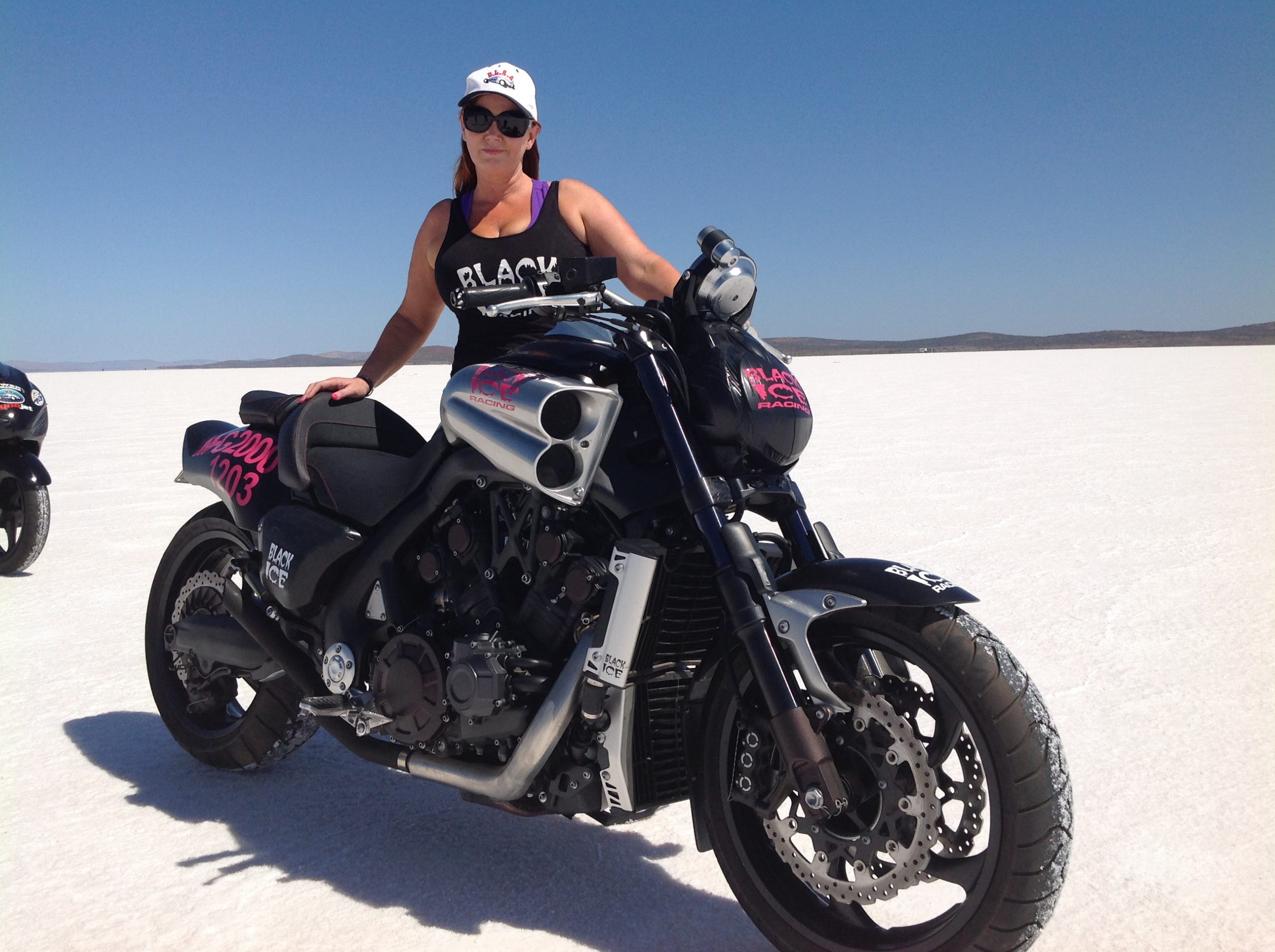 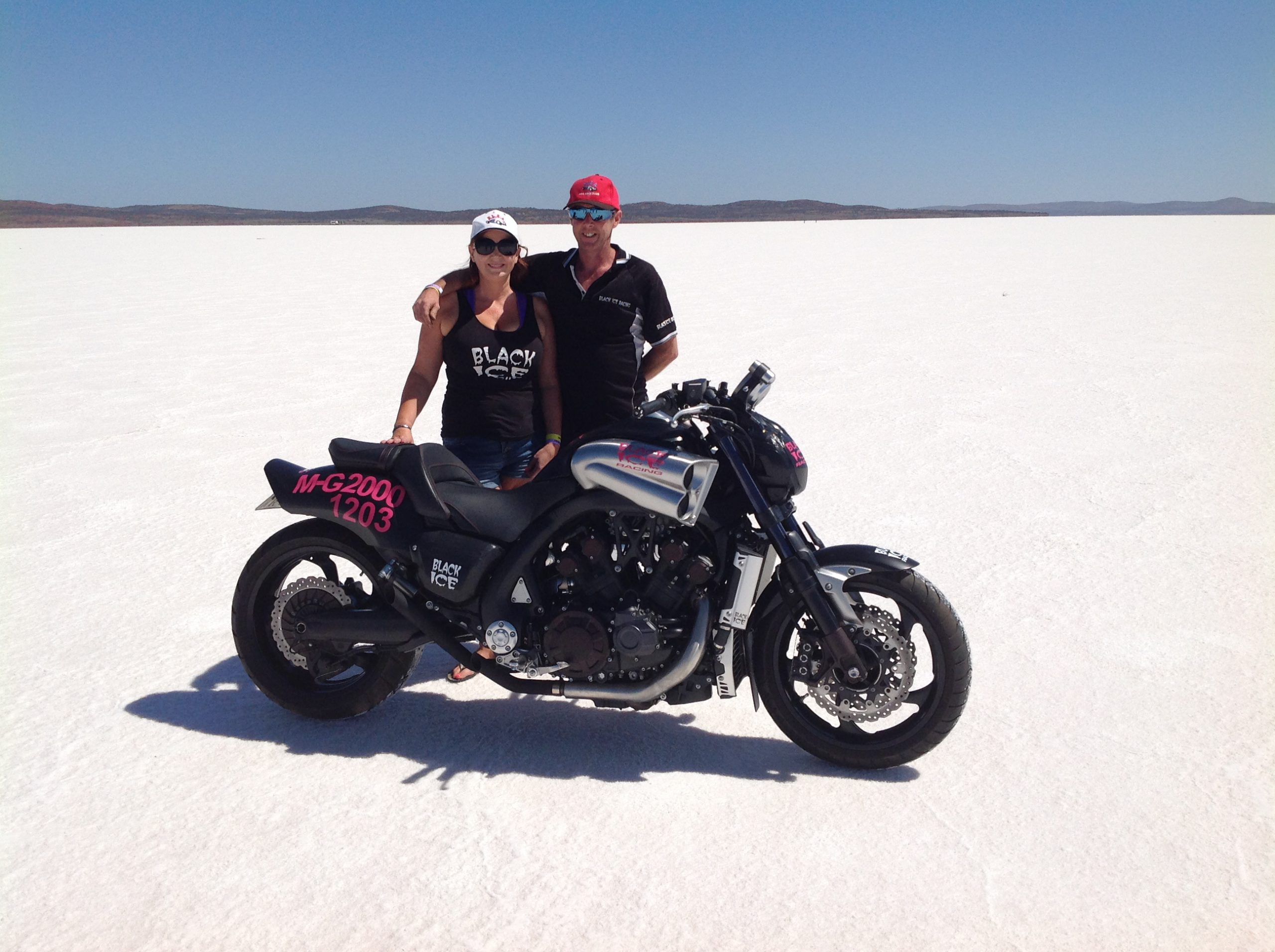 MOE’S Ken Robinson is no longer the only Australian land speed record holder in the family, after sister Rebecca Robinson throttled it at the 2015 Speed Week at Lake Gairdner last month.

Ken was also revving it up, riding the same bike to a record of his own in the PP production class, as well as breaking his own MPSG-1350 record of 351kmh by hitting 370kmh on his Suzuki Hayabusa.

Now teammates for Black Ice Racing, Rebecca was introduced to the sport at Speed Week two years ago and was instantly hooked.

“Being Ken’s sister I’ve been around motorbikes all my life; being involved in the local motorbike shop I suppose at an early age I was always interested in bikes – any type of bike – motocross, I ride a Harley on the road,” Rebecca said.

In order to qualify to ride for real at Speed Week, Rebecca had to attain specific licenses for high speed pursuits, which are a little more intense than your average road licensing test.

“129 miles (per hour) was my first license pass… it basically rolled on from there,” she said.

As Rebecca improved, Ken became a little protective of his Hayabusa so he built the Yamaha up for Rebecca to ride.

Ken tested it himself at Waikerie, South Australia on the asphalt, where he posted a new Pro2000 class record of 251kmh over 500 metres.

Last month it was Rebecca’s turn, and she did not disappoint.

“You just get a feeling of hyperactivity – I’m just hyper after I get back to the pits… you’re so excited and there’s such a sense of achievement and accomplishment and (it’s) something I’ve worked a couple of years now to achieve,” she said of her record run.

Almost incongruously for a land speed racer, Rebecca is far from a pedal to the metal rider.

Her measured approach saw her increase the pace steadily from one run to the next to eventually reach the desired mark, besting a male-dominated field.

“Some people go out on the salt and they have the concept to hold the throttle flat,” Rebecca said.

“For me, being a sensible person that didn’t work well in my head so I had to come to another way to get to my goal without going out there and doing anything silly.

“I just went out there and did a bit, then a bit more. The bike has more speed in it and next year I hope to achieve a better result yet again and go faster and faster each year.

“I’ve got children, I’ve got my career and I want to come back in one piece.”

The milestone was made more special having done it alongside family, and a relatively small team at Black Ice Racing.

“It’s fantastic to be able to do something like that with my brother and it’s something we’re really committed to Black Ice Racing as a team,” she said.

“We’re a good team and we work really well together, everyone knows their job… it works seamlessly.”

Rebecca now plans to go back and get more out of the bike at the next Speed Week, aiming to break 180 miles per hour, with the fastest United States VMAX mark of about 164mph in her sights.

After that Ken might have to build her a faster bike.