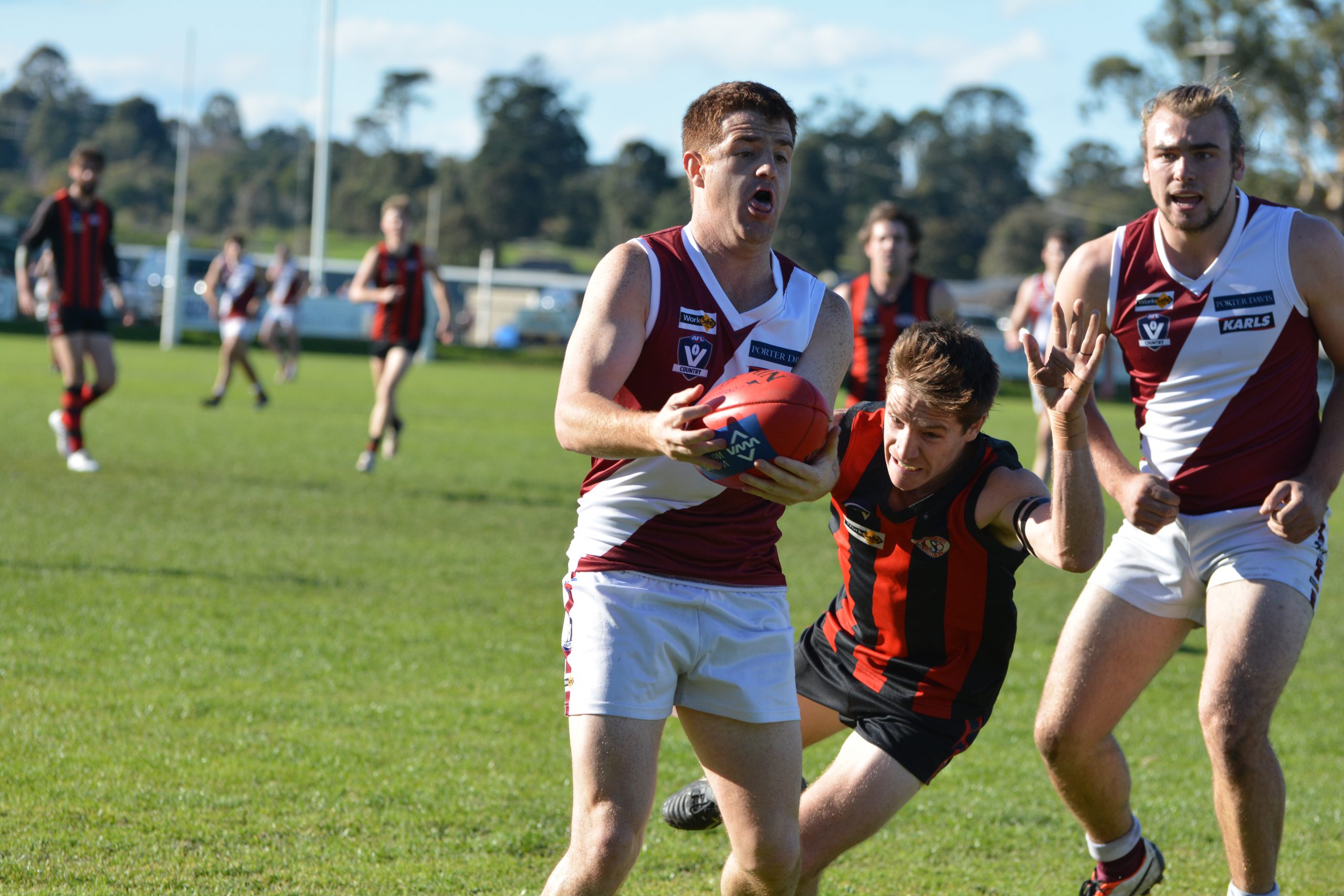 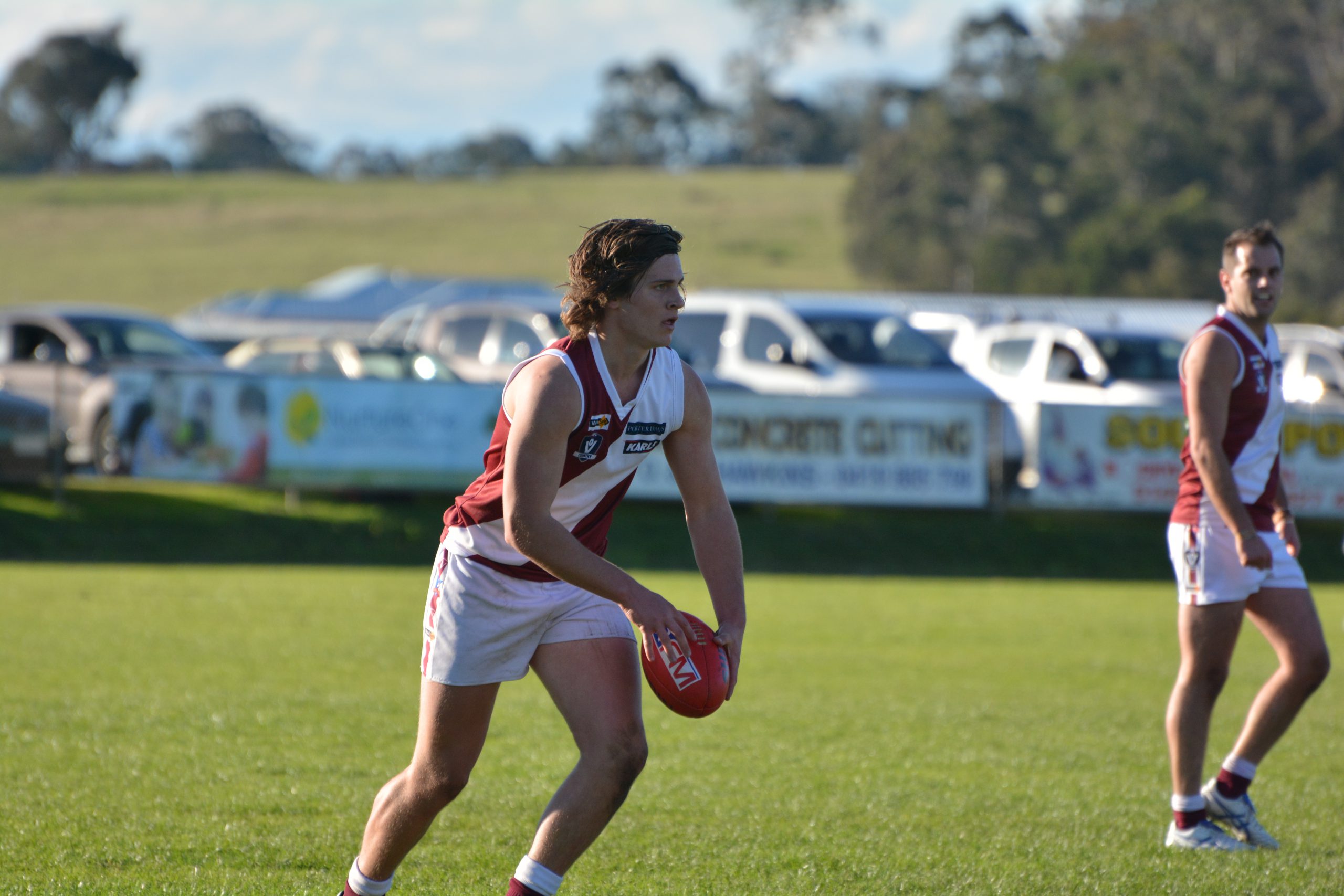 TRARALGON fought back from 35-points down at quarter-time to fall just four points short of Maffra in round seven of the Gippsland League, despite being without an interchange after half-time.

There were eight changes to the Traralgon line up, which went down to Wonthaggi by 12-points a fortnight ago.

“It’s no excuse though. Regardless of who goes in, we expect to get a result,” Maroons coach Mark Collison said.

Among the changes was Matt Northe who went back to the VFL and Cory Stockdale and Alex Lawson, who both received a call up for Gippsland Power.

“To have eight changes and to lose three of your best five or six players early, then to peg back a 35-point lead and lose by four was a good effort,” Collison said.

The Maroons failed to score in the opening term, while Maffra skipped away kicking 5.5 (35).

By half-time, the margin was back to 11 points, however Traralgon had lost three of its stars to injury: Jordan Symons with a knee, Josh Jennings with a back injury and Michael Stockdale with an ankle.

Maffra led by 14-points at three-quarter-time before being outscored by the visitor in the last.

“It was disappointing. We had the ball inside our half of the ground for the last five minutes and couldn’t convert,” Collison said.

Leading by example the coach was named best on ground for Traralgon, while Adrian Slottje did his job down back, holding Darren Sheen to just three majors.

The loss saw Traralgon slip to fifth on the ladder, behind Maffra.

DROUIN stormed to second on the ladder with a thrilling one point win over Wonthaggi.

The visitor got off to a strong start with a six goal to two opening term.

The Hawks worked their way back into the contest in the second, outscoring the Power to bring the margin back to 24-points at half-time.

Drouin slammed on three majors while holding its opponent goaless.

By three-quarter-time, the margin was back to just seven points.

Ben Hughes booted four for the Hawks, while Travis Krause was named best on for Wonthaggi with four of his own.

MISSING some of its best, Leongatha recovered from an inaccurate and low scoring first term to beat Moe.

A five goal to none second term set Leongatha up for the victory, to the tune of 42-points.

Aaron Hillberg top scored for the Parrots with four goals.

The Parrots remain at the top of the table, a game clear of Drouin.

MORWELL returned to the winners’ circle on the road against Bairnsdale.

The Tigers got the jump early and led by 31-points at quarter-time.

The visitor allowed the Redlegs back into the contest in the second, before regaining control in the third, to lead by 46-points at three-quarter-time.

Scoring just two behinds, the Tigers took their foot off the pedal in the last, but it did not matter as the visitor ran out a 27-point winner.

The Tigers sit just outside the five in sixth, on equal points with Wonthaggi, Maffra, Traralgon and Sale.

Gram booted three, in an effort only beaten by John Gooch who managed a bag of four in a best on ground performance.