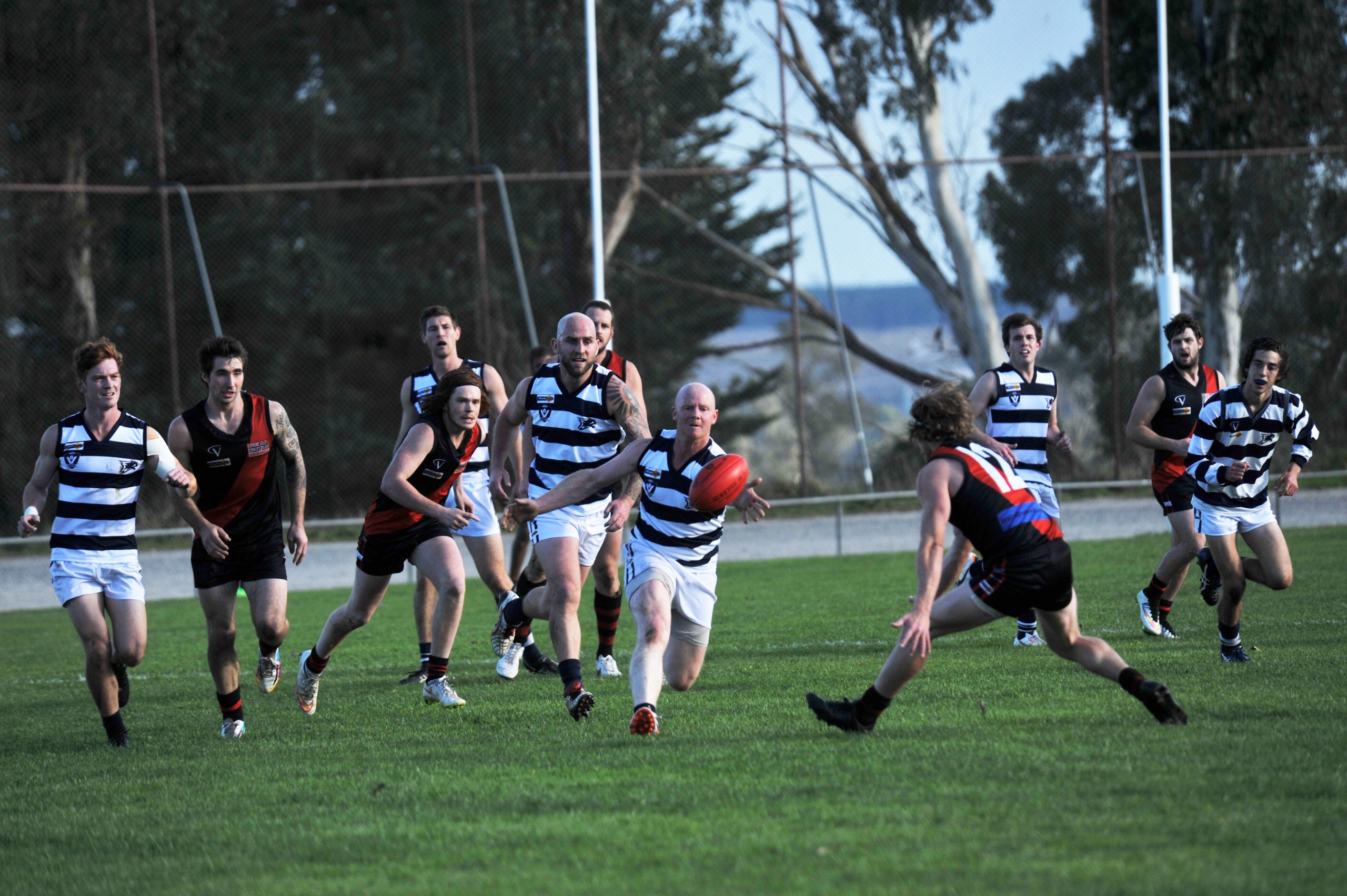 GORMANDALE caused the biggest upset of the North Gippsland football season by disposing of Sale City by two goals at home on Saturday.

Booting six goals in the opening stanza to break away to a 13 point lead, the Tigers continued to chip away on the scoreboard to extend the margin to 29 points at the main change.

With the majors all but drying up for the Tigers, the backline led by Brent Macfarlane and Joe Colaciello had to stem the Dogs’ late challenge.

Inspired by best on ground Mitch Bennett’s bag of six, Nick Grainger and Brendan Rathnow added majors to their tally as the visitors booted five goals to one in the final term to make a late flutter.

Gormandale coach Luke Henderson described the result as “reward for our effort” with his side staying positive throughout the contest.

The coach was full of praise for Colaciello who collected the three votes in a stellar individual performance.

“Joe Colaciello went to half-back and ran and carried the ball like a champ, (Brendan) Solomon was dangerous as a forward and has kicked nine in the last two weeks,” Henderson said.

Experienced hands Daniel Domaille and captain Luke Hegarty directed traffic and were instrumental in leading the younger tier of players, ensuring they stayed composed against their more fancied opponents.

City’s Bennett was a standout, Rathnow booted two in a strong showing and Tim DiMarco led a flooded backline that worked hard to shut down the Tigers’ many forward options.

Henderson’s response to a nine man backline was to remind his side to “stay positive, and man up rather than guard space”.

The loss saw the Dogs slide down the premiership ladder standings from first to fourth position.

The match was evenly placed in the first 25 minutes of play, as a mere four point margin favoured the home side at the change.

The Demons, through the Underwood’s Ryan and Grif, added to the scoreboard with a five goal to one second term handing their side a 32 point break at half-time.

With their backs up against the wall the Saints began to fade booting 1.4 (10) to 10.9 (69) in the second half, and the Demons went on to record their fourth straight victory at home.

Ryan Underwood led the charge on the scoreboard and finished the match with four majors, while brother Grif also booted four majors among 11 individual goal scorers.

There was plenty to like about the Demons’ performance; Ryan Underwood was explosive and dangerous in front of goal, big man Lukas Jenkins was key in the ruck contests, Trek Davis was staunch in defence while Shem Rendell continued his impressive form of the past fortnight in a strong team effort.

For the Saints Ben Coffey was judged best on ground in a performance which saw him boot two majors.

The charge was led on the scoreboard by 13 individual goal scorers, seven of which booted multiple majors.

Jesse Bedggood also created havoc for the Magpies’ defence with his agility and leap on his way to a bag of seven.

While the goals flowed with ease for the visitors the same cannot be said for the Magpies, who registered their sole major in the final term through Chris Damon.

Daniel Stubbe’s game high eight majors was a standout in his best on ground performance, James Beha was an influential big man around the contests while Nic Dowse was key in the centre clearances and creating run for the Kangaroos.

The Magpies were well served by Michael Diaz, Colin Ross and Alex Bermingham.

SPARKED by the skill and finesse of a quartet of goal sneaks, Traralgon Tyers United proved too strong for Woodside as Brian Graham, Stephen Hawkins, Chase Saunders and Leigh White made the forward line their own.

Lighting up the crowd with strong marks, goals from impossible angles and sublime soccer skills, the foursome booted 19 of the side’s 27.19 (181) tally which accounted for the Wildcats’ 8.11 (59).

Hitting the scoreboard in the opening minute of play, the Bombers registered their first of six for the term as the Wildcats struggled to find the sticks despite plenty of opportunities in front of goal.

Unable to buy a goal, the Wildcats’ defence worked hard to halt TTU’s momentum as they scored through Graham and Saunders.

Graham was lively in the offensive 50 as both sides struggled to navigate blustery conditions with shots at goal at either end of the ground going wayward.

Desperation at the ball was evident; TTU’s Marcus Pilgrim was busy early while Woodside’s Keenan Dingo was covering plenty of ground as he looked to send the Wildcats forward.

Failing to register a major the Wildcats went into the break 33 points in arrears.

The scoring dried up in a physical tussle after the change with the first major taking some seven minutes before Hawkins added another to his match tally of five.

Woodside’s Issac Love halted the Bombers’ run of goals, opening the Wildcats’ account after some 36 minutes of play.

TTU hit back hard as White showed silky skills to soccer one through, and captain Luke Middleton scored after an undisciplined 50 metre penalty from Blake Reed which gifted the Bombers their third unanswered midway through the term.

The Wildcats responded with their second major at the 21 minute mark, before Rhys Martin and the terrier of the forward line White combined with Graham who added another ahead of half-time.

TTU was never headed after the break, led by best on ground Graham who was commanding in the midfield as well as when pushing forward, fleet footed Hayden Hector and coach Jay Neagle. The contest was all but over by three-quarter-time before the Bombers’ fancy forwards inflicted a further nine goals.

ROSEDALE ran away with the points over Churchill in front of a swarm of Blues faithful gathered for the 50 year premiership reunion of the 1965 Rosedale senior side.

Led by coach Ben Macreadie the Blues responded to Churchill’s opening major through Kurt Holt as they skipped away to a three goal lead at the first change.

Macreadie opened with a shot into the strong breeze to start the second before Andrew Brown responded for the Cougars.

Despite kicking against the wind the Blues added six majors for the term with Macreadie, Jake Tatterson and Jake Mowat making the most of their chances as the home side took a seven goal advantage into the long break.

The half-time pause did not halt the momentum of the Blues; Dale Fleming appeared to have the ball on a string, Macreadie’s impact was influential with Ryan Carpenter staunch in defence.

The Blues held the reigning premiers to a mere three behinds as they slammed home 9.3 (57) to all but kill the contest, and romped home comfortable 88 point victors.

Churchill’s Nick Celima suffered an injury early in the first term however returned to the field, and coach Allan Chandler was another casualty.

Ruckman Andrew Brown worked hard all day, as did Dale Patterson who tried to spark his side while youngster Holt was a standout in a dirty day for the Cougars.