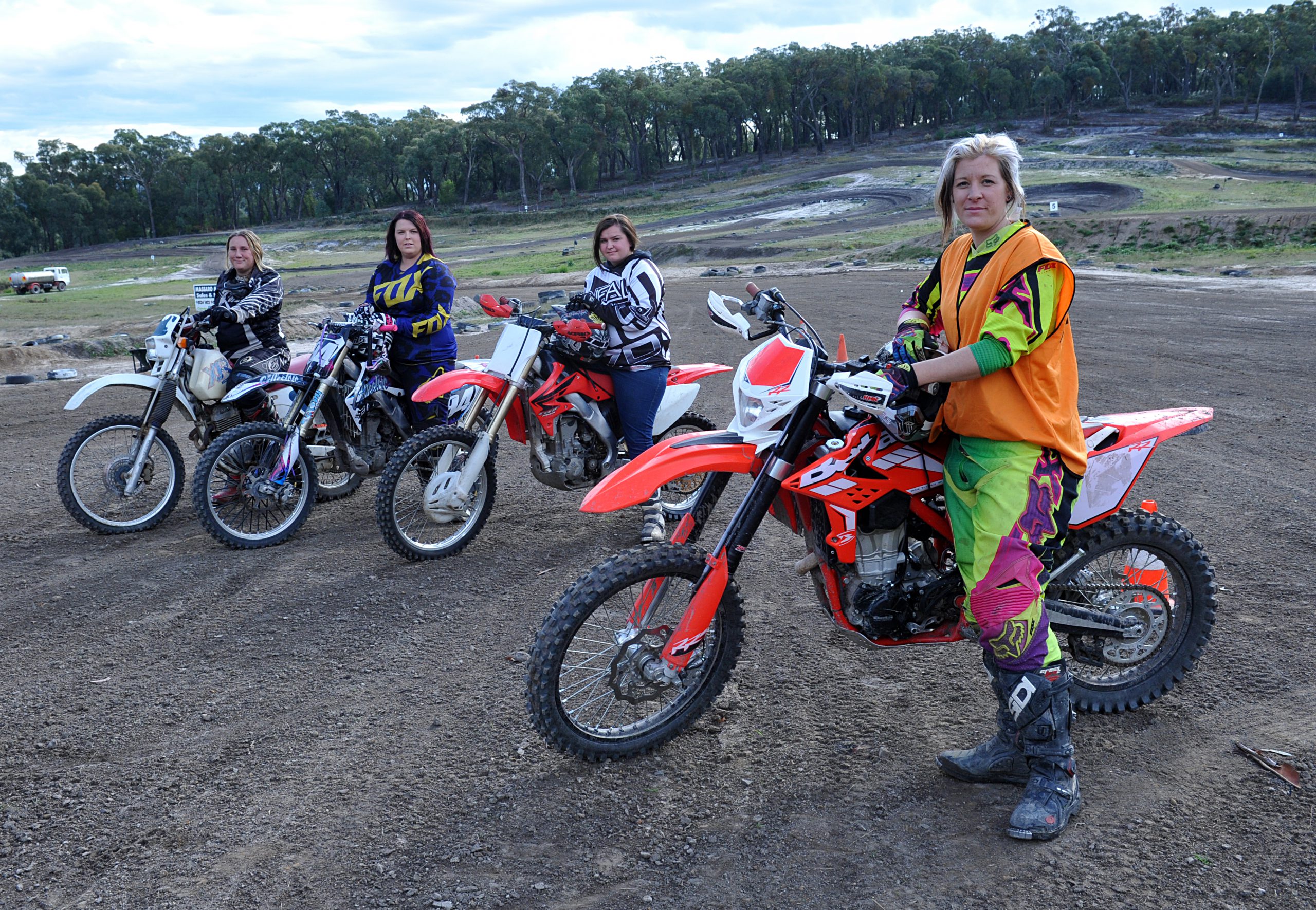 One year on and she can’t wipe the smile off her face, nor the mud from her bike given how often it’s in use.

Come this weekend Snell will be one of the instructors helping more women find their feet in the ‘boys club’ world of motorsport when the first of three girls’ only beginners days for 2015 takes place.

Hoping to inspire more women to pursue the thrills of two-wheeling, Snell earned her coaching accreditation about eight weeks ago and has already done three full days of teaching.

A perfect ambassador for the initiative, Snell said the women’s only format was the ideal introduction for aspiring female riders.

“It’s a good environment (for girls to learn). If you’ve got all the guys there they’re pretty intimidating, they roar past you and you sort of shake a little bit,” she said.

“When it’s just girls here it’s a lot more comfortable, then all the girls get to know each other and they end up going riding with each other.

“If there’s the influence of other men around, generally the girls take a step back and don’t do it.”

After being introduced to dirtbike riding in the inaugural TMC women’s clinic last year, Snell has quickly risen to prominence in enduro.

Already with two races under her belt this season, the novice turned tutor and competitor said the girls’ coaching day was just the kickstart she needed.

“I absolutely love it, I didn’t realise how big of a smile it put on my face to be honest,” Snell said.

“Ever since I’ve been doing it I’ve got so much more confidence, and the guys said to me ‘you should be racing’… so I’ve actually started doing enduro racing.

“It’s made me push myself and realise I can do this, I don’t have to be the best to be able to do it and it doesn’t matter what I look like.”

While Snell has made a splash on the competitive circuit, this weekend’s crash course will hone in on the basics, offering new riders a chance to learn from scratch.

The training day will centre on bike maintenance, positioning and setup, technical riding and control, braking, standing, balance and body position, progressing into cornering and some bush work.

It is not a course for experienced riders or those already racing, but is aimed at teaching the core skills through to helping ladies preparing for their first race.

Coaching will take place in a controlled environment including motocross track, flat track, open grass and two bush loops, appropriate for ladies who wish to learn trail riding, technical riding, enduro or those who just want to get on the dirt track and hold it open.

As someone who has been there before, Snell said the presence of a female coach was a big boost.

“It makes a big difference having a female coach for sure because you can relate, you know how they feel and you’ve been in that position before,” Snell said.

“It’s meant for beginners, it’s meant for everyone, don’t be afraid to do it; a lot of girls hesitate and think I’m not good enough (but) it’s not about being good enough.

“A lot of women are turned away because they think it’s for motocross, it’s not, it’s to learn all the skills to do any type of dirt riding you want.

“It doesn’t matter if you crash, I as a coach crash in front of the girls when I’m teaching them.”

The TMC women’s dirtbike training day will be staged on Saturday from 9.30am to 3.30pm.

Participants must be at least 16 years of age and bring their own motorbike and safety equipment, including helmet, boots and googles.

The day costs $50 which includes a day license.

The club will also stage women’s training days on 15 August and 17 October.