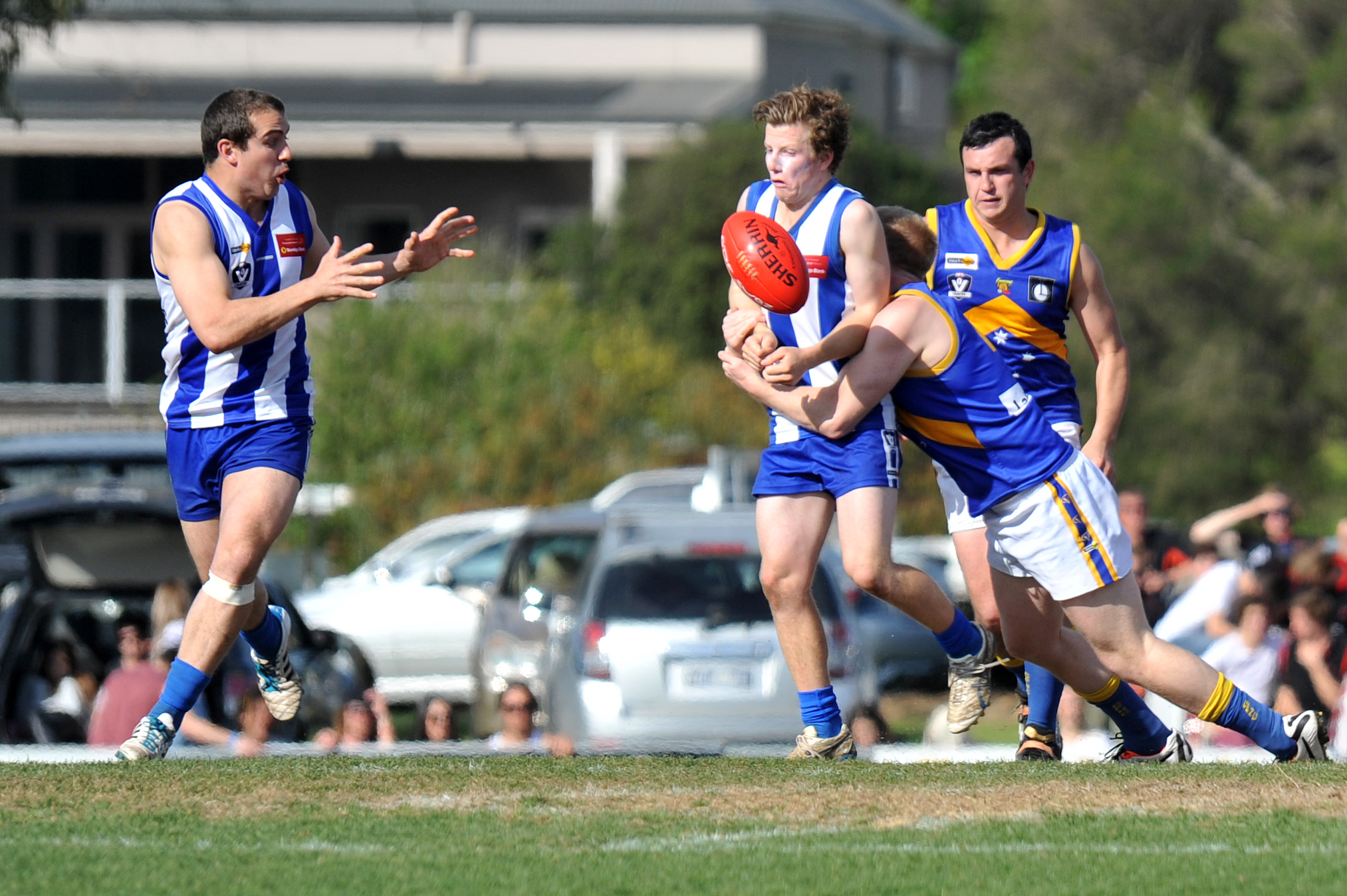 REIGNING North Gippsland premier Churchill climbed back into the top five for the first time in three weeks following a thrilling one-point victory over Heyfield.

For the second week running last year’s grand finalist Heyfield dropped the points at home in a contest which ebbed and flowed.

Registering the opening major through Hamish Towns, Churchill felt the wrath of Heyfield’s forwards who slammed home six unanswered goals to take a commanding 31-point lead into the first break.

Churchill’s Nick Campbell and Towns halted the Kangaroos’ run early in the second stanza, before Travis Brighton made it three in a row to the visitors as they reeled the margin back to two straight kicks.

In a mirror image of the first term Churchill kept the scoreboard ticking over, registering six majors to one to take a three-point margin into the long change.

Half-time did not halt Churchill’s momentum and their three-point buffer quickly blew out with majors to James Allan and Campbell extending the lead to 20 points.

Trailing by less than two kicks Heyfield dug deep in the final term; Andrew Lambie spurred his side on as they kept the visitors goalless and mounted a challenge on the scoreboard.

Churchill’s Jarrod Broadbent was a standout, captain Chris Williams was instrumental, and the wise heads of experienced campaigners Leigh McDonald and coach Allan Chandler settled the side when the game was in the balance.

Lambie was judged best a field for the Kangaroos, with Tom McMillan and Sean Humphries solid contributors.

The loss saw Heyfield drop out of the top five to sixth place.

SALE City laid the foundation for its 14.13 (97) to 10.8 (68) win over Rosedale with a barnstorming seven-goal-to-two premiership term in the top of the table clash.

Trailing by 11 points in a tight hard fought opening half, the home side clicked into gear and seized an opportunity to break clear not only on the scoreboard, but the premiership ladder standings.

The Dogs turned the deficit into a three-goal lead at the final change.

Led by Nick Grainger, who returned to the senior lineup with a bag of six, along with four to Mitch Bennett, the high flying younger brigade caused headaches for the competition’s number one ranked defensive unit.

The Dogs came again in the final term to convincingly outscore the visitors, making it 11 to four in the second half.

Trailing by 44 points at the last change, the Magpies played a dogged brand of football in the final stages to keep the Saints goalless as they made a late charge on the scoreboard.

Having booted five majors in the first three terms, Glengarry went just shy of matching that tally with four in the fourth term to reduce the final margin to 12.9 (81) to 9.7 (61).

The result was flattering for Cowwarr, which struggled to make an impact in the last as the Magpies’ forwards pressured the normally composed Saints back line into a raft of errors.

YARRAM solidified its top-three hopes with a convincing victory over Woodside on the road.

It was far from one way traffic early in the piece with the Wildcats within arm’s reach of the competition’s third ranked side at the first change, before the momentum swung the way of the Demons.

Yarram skipped away to a 19-point buffer by half-time, a margin they would extend to 46 thanks to a dominating third term.

Forced to earn the four points, Gormandale started strongly before the home side, through Chase Saunders and Stephen Hawkins, imposed itself in front of goals.

The pair added five and three goals respectively, with Hawkins taking his season tally to a league high of 32 majors.

Hawkins was lively early, booting two of his majors in the opening term, before a late goal to Saunders closed out the quarter.

Gormandale’s Paul Richards opened proceedings in the second with the first major coming some 15 minutes into the term.

The Bombers broke the momentum, slotting through four unanswered including consecutives to Saunders before Brian Graham chipped in with one.

The third term was an arm wrestle with both sides booting three majors apiece. The visitors, through Brendan Solomon, remained very much in the contest ahead of the final break.

Trailing by 23 points the Tigers fought hard, but as they had done all afternoon the Bombers responded with three on the run.

Gormandale then lined up for three on the trot with Luke McLean and Daniel Domaille among the scorers.