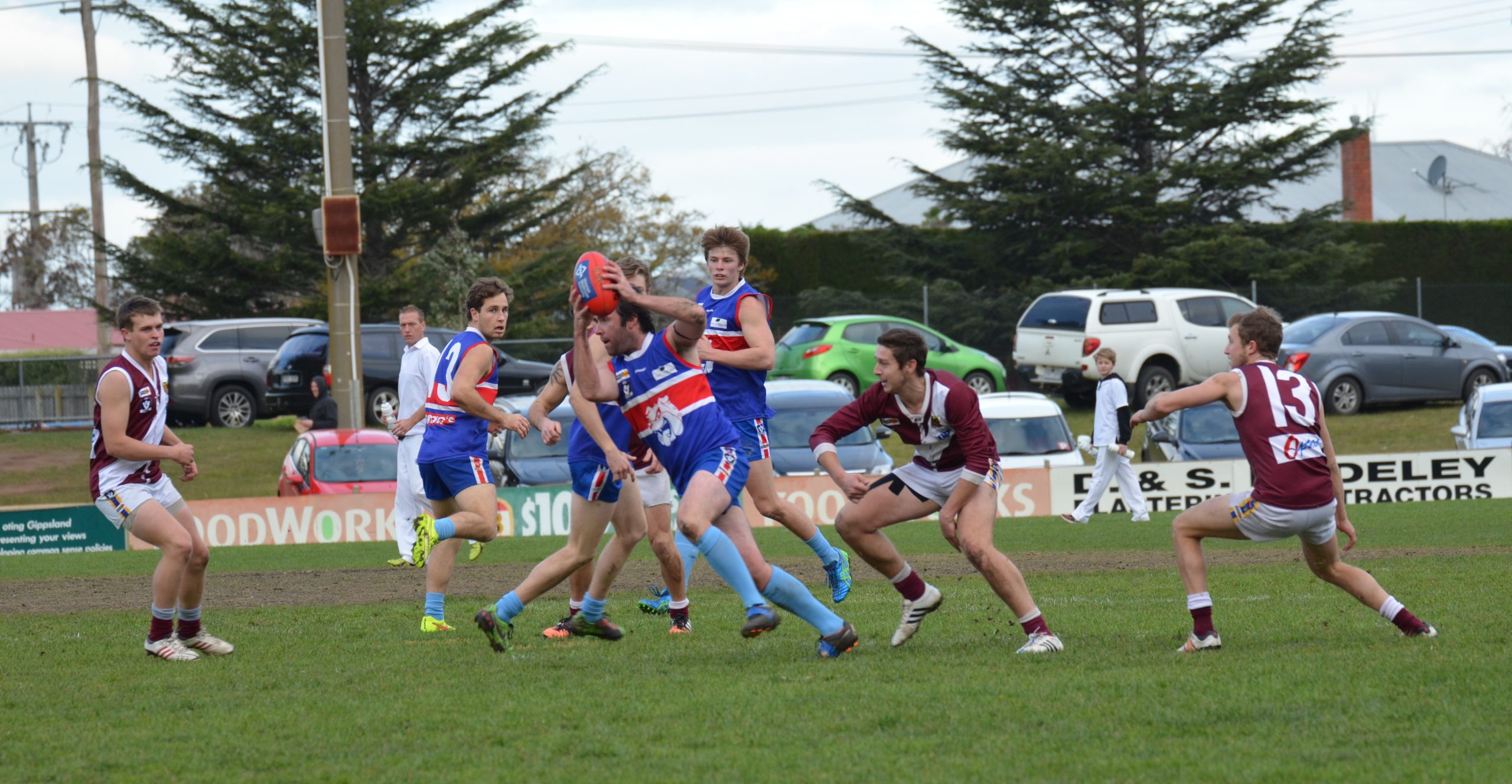 NORTH Gippsland ladder leader Sale City consolidated its bid for a top three finish with a 14-point win over a fast finishing Churchill to kick off the first half of the split round 12.

Three points separated the sides at the first change, with home side City extending the lead to nine ahead of the main break.

The floodgates then opened in a one-sided 25 minutes of play which saw City break away from the Cougars, with a six-goal-to-one third term all but burying the contest.

A new signing, former Maffra premiership player Nick Horsford, was an imposing target in the forward 50 combining with Jake Schuback in a physical opening quarter.

Schuback was amongst it early; a free kick against Churchill’s best on ground Brayden Kokshoorn handed City’s forward the opening shot at goal which faded away.

Play rebounded back and forth between the arches before Nick Grainger slotted one through from the pocket to get the scoreboard ticking over.

Nick Celima’s set shot from 30 metres out faded to the near side in the blustery conditions before the deadlock was broken.

The ball was measured with quick and direct movement from defence resulting in Tom Wilson’s shot on goal directly in front, which hit the post for a behind.

Both sides had their chances; Dillon Leys was getting his hands on plenty of the ball and Leigh McDonald was keeping a close check on David Piasente, whose second and third efforts provided City with many a turnover.

Brendan Rathnow and Jake Milham combined in a strong passage of play which set Lutze up with a shot at goal, but the captain failed to seal the major.

The turnover saw the Cougars, through coach Allan Chandler and experienced campaigner Dale Patterson move the ball forward with Tim Darby recording his first of two with a shot from the pocket.

Grainger was unable to line up the goals before the home side registered consecutive majors with the Cougars yet to enter their forward 50.

When they did they made the most of their opportunities, first through Brad Knowles before Kurt Holt got in on the act to reel the margin back to eight points.

The Cougars kept charging, but errant kicks were cut off by City coach Hayden Burgiel who went about mopping up across half back.

Chris Williams broke the Dogs’ defence to register his side’s third unanswered in a strong finish to the first half.

It was an avalanche of goals from the home side in the premiership term. Mitch Bennett, Brad McKay, Keenan Hughes and Schuback were all among the play as they engineered a 6.4 (40) to 1.4 (10) term.

Down but not quite out, Churchill opened the final stanza with the first major before Hughes and Grainger scored to extend the top Dogs’ margin to well beyond 45 points.

Stepping it up a cog in the engine room Travis Brighton led the visitor’s purple patch, and ferocious tackling featured as the Cougars took the game on.

Slowly the challenge on the scoreboard was mounted.

Luke Brereton reduced the deficit to 33 points, followed by a procession of majors.

Knowles had his second, Nathan Osborne and McDonald had their chances but their snap shots at goal missed, before Brighton’s telling long shot from outside 50 brought the visitors to within three kicks by the final siren.

Piasente amassed possessions in a stellar individual performance to be named the Dogs’ best a field, Rathnow was the architect in the second and third terms in the forward 50, Beau Bennett was commanding when pushing forward with ruckman Harry Kaandorp also among the standouts.

Churchill defender Kokshoorn wore Schuback like a glove and was aided well by the likes of Jarred Broadbent and Jordan Fenech.

A nine-goal haul from Woodside captain Ryan Foat guided his side to its fourth win of the season in a barnstorming performance against Glengarry, 29.18 (192) to 12.5 (77).

On the receiving end of an old fashioned drubbing against Rosedale last round, the Wildcats brushed aside the disappointment and, bolstered by the return of a number of key players, went about hitting the scoreboard early with seven majors in the opening term.

Adding a further eight-goals-to-one ahead of half-time, the home side created an insurmountable 85-point margin at the long change.

Wildcats man Keenan Dingo was proving a handful on the ball, amassing possessions and creatively setting up several goals, while Foat was an imposing tall figure in front of goal.

The second half was in vast contrast to the first as the Magpies matched the home side in many facets of the game, including the scoreboard with a 10-goal half.

The Magpies’ strong second half showing was one of their best performances to date this year.

The charge for the visitor was led by Shae Duncan, who collected the three votes along with a bag of six majors.

Leigh O’Mara and Mitch Marino were also solid contributors around the contests.

Foat was one of 10 individual goal scorers along with Trent Arthur.