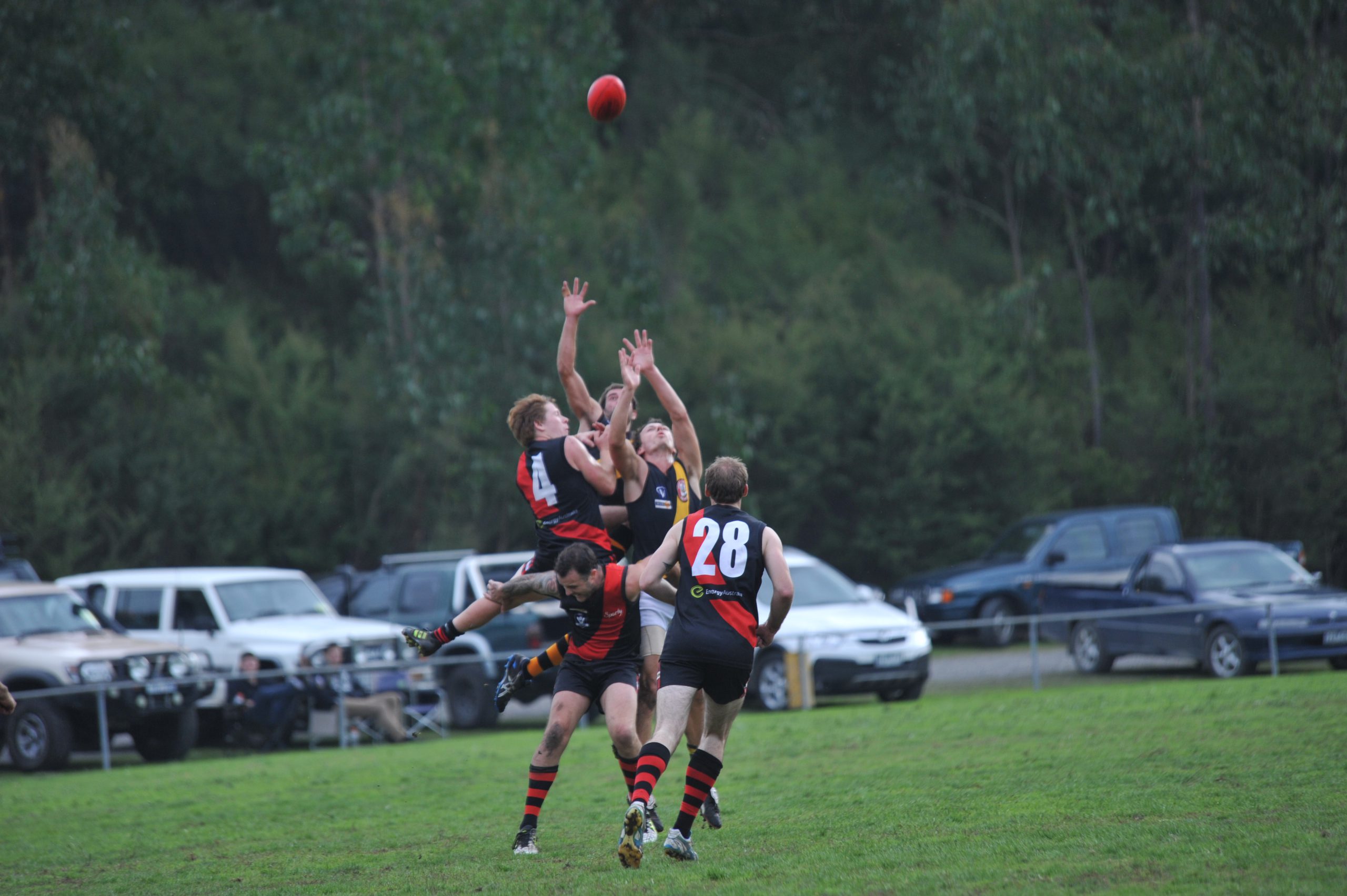 ROUND 13 proved unlucky for Mirboo North as the Tigers went down by a single point to Yallourn-Yallourn North in Saturday’s Mid Gippsland football match of the day.

The result marked the second successive week the premier’s game has been decided by a point, though last week they were on the right side of the outcome.

The Bombers scored the first of their four goals in the opening three minutes through Barry Brooks, but it did not take long for Josh Taylor to reply.

Mirboo North looked the better side in the opening stanza to lead at the break after further goals to Jack Robertson and Shane Peters.

Every score was precious under challenging conditions as the Tigers led by 11 points.

Bombers coach Adam Bailey began to exert his influence on the match and his second quarter goal sparked some patches of good football.

As the rain fell both teams struggled with the greasy ball; YYN scored a further three behinds before Tyler Brown’s goal edged the Bombers closer to Mirboo North’s slender tally.

Mirboo North was on the defensive and under attack from a determined YYN and back men were forced to concede behinds under pressure.

The second half of the match produced only one goal as conditions made it impossible to play decent football.

Mirboo North had chances in the third but the goal gods were not with them as they produced a string of five behinds.

YYN did not fare much better with only one behind for the term.

It was a struggle with YYN holding on to a 10-point lead at three-quarter-time.

With the home crowd cheering them on, the Tigers slowly clawed their way back into contention.

A goal at 20 minutes got them within two points, but when Jacob Nash missed with a sliced kick the margin was back to a point.

Bailey, Brown, Jordon Demetrios and Tom Hutton were best but the back six deserve special mention for their efforts in keeping the Tigers out.

For Mirboo North, the loss saw them drop back a place to third.

The Tigers’ better players in the mud were Jack Robertson, Ben Richards, Peters and Daniel Taylor.

YYN is now firmly entrenched on top of the ladder with an eight-point break over Yinnar.

THORPDALE bombed out for the second successive week, putting its hold on fifth place in jeopardy.

The Blues were safely entrenched in a finals slot two weeks ago, but two surprise defeats have them looking over their shoulder, with Trafalgar just two points adrift.

Yarragon put Thorpdale to the sword to the tune of 52 points, marking a big turn around after a seven-point loss in their prior meeting and their first win over the Blues since 2012.

A seven goal second quarter by the Panthers showed up Thorpdale, which was expected to do better against the near bottom side.

Former league best and fairest Ben Damschke was a driving force for the Panthers as was Rob Wallace, David Bates and Jeremy MacDonald.

Dillion Smith scored four goals in the 12.4 (76) to 3.6 (18) win, with the rest shared by seven players. For Thorpdale, Nathan Scurrah scored twice.

TRAFALGAR issued a challenge for fifth place, running over Morwell East by 10 points to trail Thorpdale by two points on the ladder.

The Bloods saluted in a game that never reached great heights with an aggregate of 8.20 scored for the day.

Weather conditions hampered the game as a spectacle, but the closeness of the scores kept spectators who braved the elements enthralled.

Trafalgar led at the first break, but Morwell East was ahead at half-time by a point.

It was a frustrating day for forwards with eight players kicking the eight goals.

The Magpies adapted to the chilly conditions better than the home side, with big forwards Julian Blackford (five) and Cameron Harwood (four) leading the way.

Half the team scored goals as Yinnar racked up a monster total under testing conditions.

Eleven players assisted in the tally which boosted the Pies percentage, helping them jump to second on the ladder behind YYN.

Although beaten, Hill End put on a brave face with Tyler Forte, Ben Noy, Richard Horton and Luke Cervi among the votes.

NEWBOROUGH condemned Boolarra to second last on the ladder with a 63-point win over the Demons.

The Bulldogs again started off well, building up a good score by the first break to lead by 19 points.

Conditions worsened and so did the football as players found it difficult to hold marks and kick to position.

Adam Kennedy booted four with the rest being shared by a pack of seven, while Boolarra had a picket fence of four goalkickers in the 14.7 (91) to 4.4 (28) scoreline.

Anthony Rosato continues to show great potential as a future star with Newborough and was well supported by Josh Keyhoe, Anthony Battista and Chris Hancock.