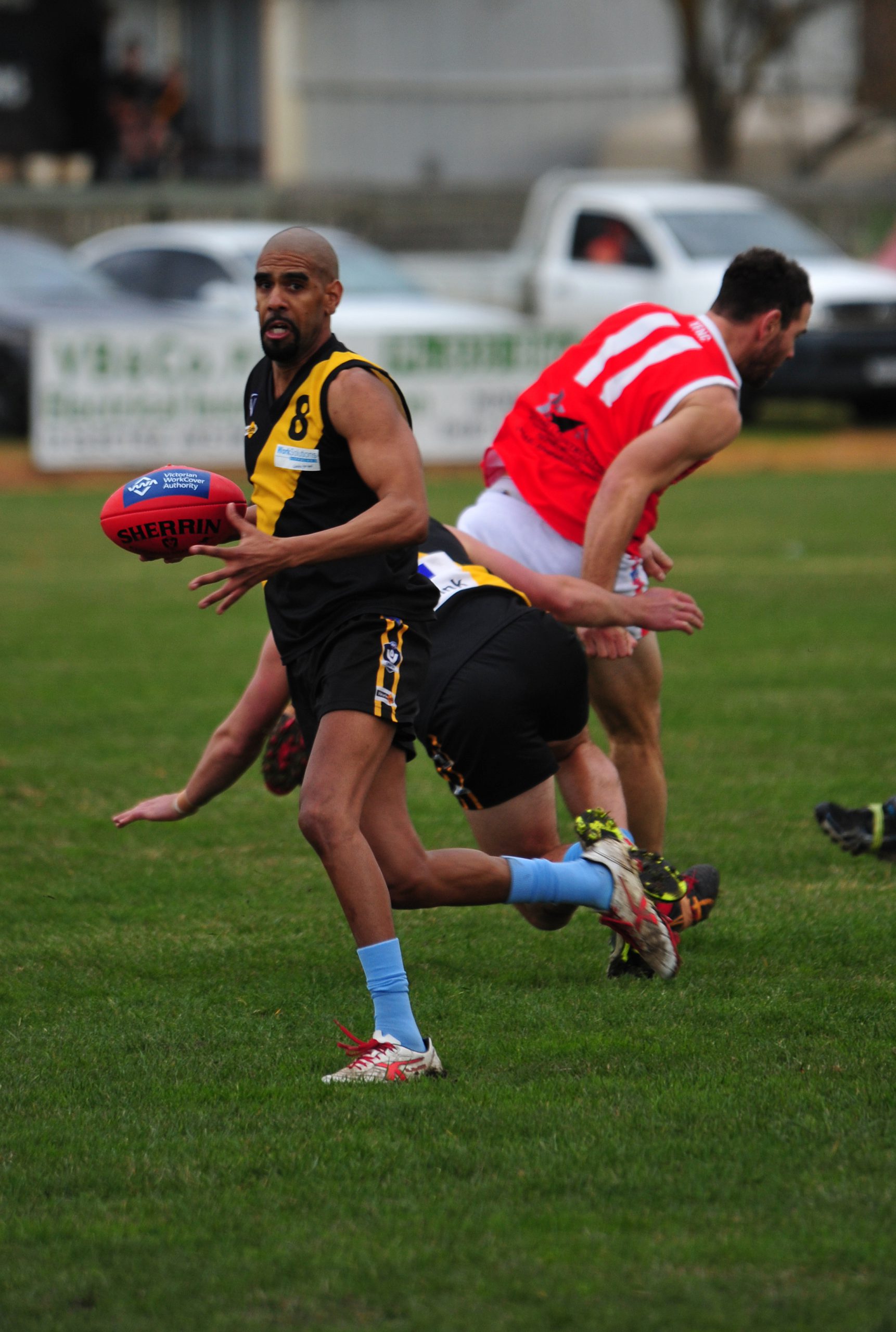 YARRAM was forced to work hard for the points, after being unable to shake Gormandale in an opening half which saw scores locked at 7.5 (47) in the second half of the split North Gippsland round 12.

A two-point margin favoured the Tigers at the first change with the sides exchanging blow for blow on the scoreboard in an entertaining eight-goal opening term.

Gormandale’s Jordon Sandy and Yarram’s Corbin Sutherland were among the goalkickers early, with Sandy finishing the contest with four while Sutherland added six to his season tally of 36.

The deadlock continued in the second term; the Tigers hunted in packs as they pressured their higher ranked opponent into making errors and capitalised on the scoreboard with Joe Colaciello booting two for the quarter.

With scores locked, the tables turned in the third as Yarram stamped its authority on the contest.

Slowly building momentum the Demons, through Sutherland, Ryan Underwood and Tyler Chisholm, kicked away in a four-goal-to-one quarter.

Grif Underwood led the charge in the engine room, Chris Pettit was the architect in defence shutting down the Tigers’ key forwards, Lukas Jenkins worked hard to negate the home side’s ruck stocks with Sutherland and Chisholm notable performers.

The Demons’ versatile forward line combined magnificently in the second half to set up the comfortable 35-point victory, 15.9 (99) to 9.10 (64), to ensure the side remained in touch with the competition’s front runners.

Gormandale’s Jaryd Gilroy was a standout and Brendan Solomon continued his strong season, while Sandy’s bag of four saw him among the votes.

A fast-finishing Traralgon Tyers United looked on song to steal an unlikely victory over Rosedale yesterday, but failed to close the gate as the Blues won out by three points.

Producing a remarkable second-quarter comeback to turn a 17-point deficit into a seven-point lead, the Bombers were sublime, booting six straight after their first major took some 38 minutes to register.

From that point it was a different Bomber outfit, with the Blues on the receiving end of what they dished up from the opening bounce.

In wet and wild conditions the opening term was an arm-wrestle, with eight minutes gone on the clock before Rosedale’s Corey Beaver slotted through the opening major.

It would be the first of three unanswered for the term, in a similar scenario to the round three clash which saw the Bombers held goalless in the opening term.

Leading by 17 points at the first break, the Blues continued their dominance around the contest, winning the contested footy and making the most of their chances in front of goal through Rohan Diamond. The lead quickly stretched out to five goals before the Bombers bit back at the 10-minute mark.

Chase Saunders got his side off and running with the first of a flood of majors.

Brian Graham was busy trying to set his side up, and was on the end of the Bombers’ second major after roving the lost ball in the goal square to snap true.

Stephen Hawkins was at it minutes later – his goal set up by the hard work of Hayden Hector across half-back as he sent the Bombers forward with poise and precision.

The lift in the Bombers’ intensity was telling; captain Luke Middleton was leading the charge along with Graham and Hector.

Matt Stolarczyk handed Graham his second as the Bombers closed to within two kicks.

Using the boundary as a guide the Blues cautiously and slowly rebounded from defence, pushing forward to little avail.

The Bombers’ back six, led by Guy Sinclair, soon charged the ball forward with Rhys Martin snapping to make it a one-point ball game.

Winning the centre clearance, Stolarczyk took a solid mark under pressure before combining with coach Jay Neagle whose shot from the 50 metre line scraped through the goals ahead of the long change.

The Bombers scored the opening major of the second half, before Rosedale fought back with three straight.

Brandon McDonald was among the scorers as the Blues wrestled back the lead kicking to the favoured scoring end.

Leading by three points at the final change, the sides went back and forth.

TTU missed two shots in the early stages of the term before the Blues broke through.

Neagle was an early casualty, helped off the ground with a leg injury, and Blues coach Ben Macreadie went the same way when he hobbled off before returning.

Bomber Hawkins slotted through his second, to bring his side back to within a kick.

The Blues came again though, and a strong mark to Macreadie 10 metres out appeared to be the quick reply, before the umpire deemed it was a point, leaving door ajar for the Bombers.

As conditions continued to deteriorate, the Bomber trio of Graham, Hector and Saunders combined to make a last ditch attack to win the contest.

Saunders’ shot on goal fell short of the line, and a mark was taken by a Bomber with a snap at the posts missing.

With the clock counting down on a low scoring term, the Blues held strong to keep their noses in front and record their ninth victory, 9.7 (61) to 8.10 (58).

The loss proved costly with the Bombers sliding to fifth position.

HEYFIELD wrapped the game up by half-time against eighth placed Cowwarr ahead of steady rain that fell after the main change.

Flying out of the blocks to boot seven goals to two in the opening term, the Kangaroos continued their dominance in the second stanza, extending their 31-point quarter-time lead to 10 goals at the long break.

Boasting nine individual goal scorers it was James Beha who was most influential in the forward line for the Kangaroos.

Beha finished the contest with seven majors while coach Adrian Cox made the most of his chances with three.

The Saints started the third term strongly, outscoring the home side with a 4.2 (26) to 32 (20) quarter, before fading away in the final stanza as Heyfield’s defence held the side goalless.

Heyfield’s Kodie Woodland collected the three votes in a best on ground performance which saw him boot two majors, Beha was a telling target up forward and Jesse Bedggood was lively setting up several passages of play.

For the visitors Pat Tainsh was integral in the middle of the ground with Craig Radford and Brett Grieve solid contributors.