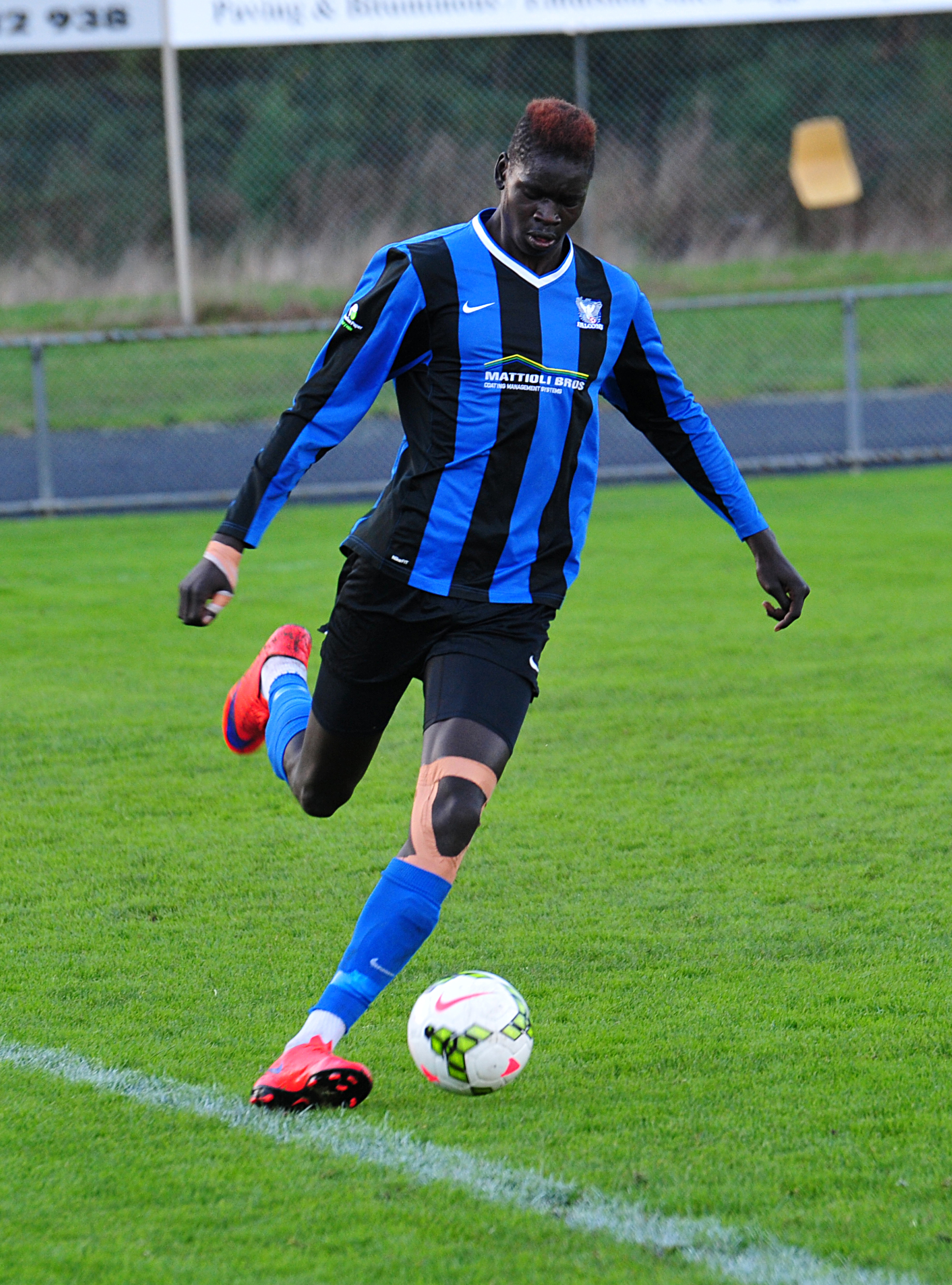 FALCONS withstood a stern challenge from fourth placed Newborough Yallourn United to hold steady at the top of the Gippsland Soccer League ladder in a physical encounter at Burrage Reserve.

On a wet and miserable day the Combine would challenge the league leaders before succumbing 2-0.

Falcons had one late change with Stefan Baccega falling ill the night before, but this was merely a blip on the radar as the efficient Birds were up for the contest from the start.

The first 30 minutes was a tightly fought affair with no clear cut opportunities for either side.

As the half wore on, Falcons started to flex their muscles and eventually took the lead.

A searching Isaac Abas run from full back was the catalyst for the opener, as he neatly cut back for talisman Jesse Kennedy to ram home from close range.

As expected, Newborough would come out fighting after half-time and Falcons had ‘keeper Adam Brooker to thank as he expertly saved a Mark Fairbrother strike from six yards out.

Once again, the away side arrested control of the contest the longer it went and Abas had the final say as he weaved his way past the home side’s defence and astutely finished to wrap up the points.

Falcons this weekend host Traralgon City which has its tail up after dismantling Pegasus on the weekend, but will have a much tougher task against the ladder leaders.

Moe United slipped away from their visit to Monash Reserve with all three points following a 2-0 win over the Wolves.

Both sides were missing their skippers with Ryan Semple and Marc Mchallam absent.

An even start saw both defences having the better of the play as the forwards struggled in the slippery conditions.

A corner from former Monash star Ashley Birrell led to Moe’s opening goal, as Joel Baldwin rose unchallenged to head home midway through the half.

Neither keeper was tested much and the game was in the balance at the break.

Moe had another ex-Monash man to thank for retaining their lead.

The tackles were flying in thick and fast with Moe drawing the ire of the referee with four bookings.

Monash keeper Enda Murphy was forced into action as Moe began to ramp up the pressure.

The Red Devils’ second goal came in bizarre circumstances as Luke Bathgate’s deep cross skidded in the box, off the upright and into the back of the net.

Despite its best efforts Monash struggled to test Albanese as the side from Olympic Park kept up their title hopes with another three point haul.

Victory fought back from a 2-1 half-time deficit, scoring twice in the second 45 minutes to record the historic result.

Connor Wyatt, Matthew Steen and Chris Tigas were the goal scorers for the victorious Victory.

TWO second half goals saw Churchill United score a come from behind 2-1 win over Olympians at Hazelwood South Reserve.

Ray Myers and Mitchell Jackson netted in the second to help the Rams overrun the visitor, which led at the break following Declan Wilson’s strike.

The result saw the reigning league champion edge above Monash on percentage into seventh place on the ladder.

Aliyu scored a hat-trick, as did Kehinde Aliyu.

Pegasus began the clash with 10 men, including a few walking wounded, and was shown no mercy by the rampant Roosters.