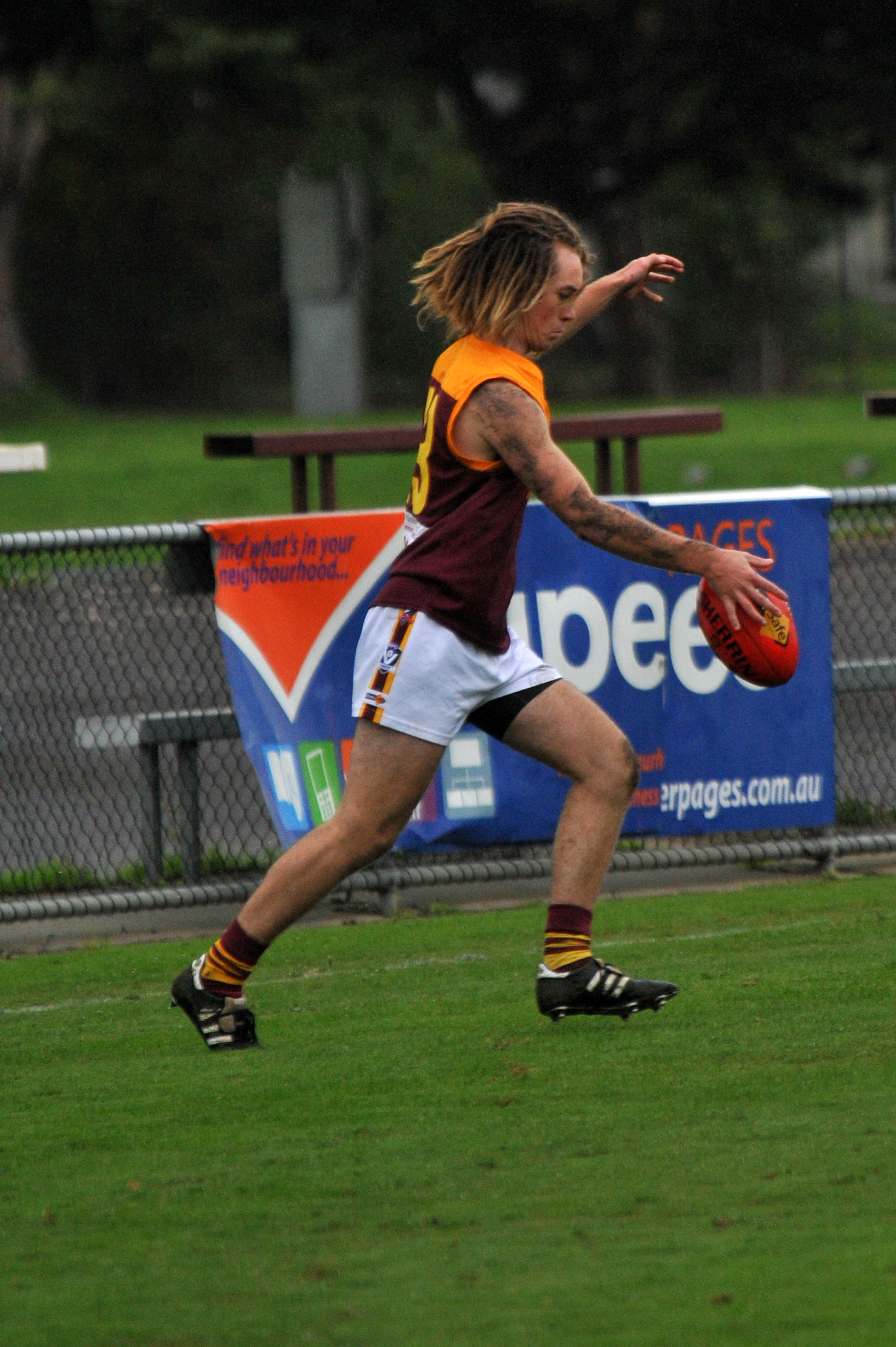 MAFFRA will be looking to consolidate top spot when it hosts Drouin in round 13 of the Gippsland League on Saturday.

Fresh from a five-goal win over then ladder leader Leongatha, the Eagles will be full of confidence.

“Good to be on top, but the problem is to stay there now,” Maffra coach Wayne Butcher said.

“Leongatha is a really good side, (and with) Traralgon, Wonthaggi, Sale it’s a pretty even competition.

“We have won enough games to be there, now we have got to work to stay there.”

The Eagles could be without star forward Darren Sheen, who suffered a thigh injury early in last weekend’s top two clash.

Butcher said it would be a huge blow to lose the side’s top goal kicker.

“Oh yeah, he is a big part of our team of course.”

Maffra has won its past seven against the Hawks and Sheen has been a big factor, with respective bags of six, 17, 13, 16 and five goals.

The round 13 clash is a must win for Drouin, which slipped to seventh on the ladder following last weekend’s loss to Traralgon.

The Hawks were without two of their best, with coach Bob McCallum and midfielder Daniel Nicholls fulfilling Vic Country commitments.

“It will be a tough one, their coach is in good form. They are going to need to win, Sale are coming home strong and Morwell are too, really anyone can make the five,” Butcher said.

MOE will be looking for a repeat of its round four performance, which saw it upset Wonthaggi at home and break the Power’s eight game winning streak over the Lions.

However Moe, which has won on the Bass Coast just three times in its past 17 visits, will have to be at its best.

The Power was left reeling following last weekend’s loss to Sale, which put it a game behind Traralgon in fourth on the ladder.

CHASING its seventh win of the year, Morwell is continuing its push for a spot in the top five.

The Tigers have won their past 15 straight against Warragul in its longest winning streak over the Gulls in history.

LEONGATHA will be vying for its first win in three weeks when it makes the long trek east to take on Bairnsdale.

The Redlegs have plenty of reasons to be confident; the last time these two sides met at this venue, Bairnsdale kicked its biggest ever score against the Parrots in its first win at home over Leongatha since 1994.

Nine and three after 12 rounds, the much improved Leongatha has only just slipped to second after spending the first half of the year on top of the table.

THIRD placed Traralgon is targeting three in a row when it hosts the newest inclusion into the top five, Sale.

“They (Sale) just knocked off Wonthaggi. When they are at their best, they are hard to beat, so we have to make sure we are at our best,” Maroons coach Mark Collison said.

The home team is expected to welcome back former coach Josh Jennings from a back injury after delaying his return by a week. Sale is full of confidence after upsetting the fourth placed Wonthaggi.

“The win was a good confidence booster for us and allows us to start to build some momentum again leading into the back end of the year,” Magpies coach Travis Ronaldson said.

Ronaldson said his side’s inconsistency was not a cause for alarm.

“We are a young group and we are a work in progress, continually learning and improving. The key for us is to try and close the gap between our best and our worst, which should allow us to be more consistent,” he said.

Sale will be seeking revenge after its most recent encounter with Traralgon, which saw the Maroons break Sale’s long standing winning run at home of 29-straight.