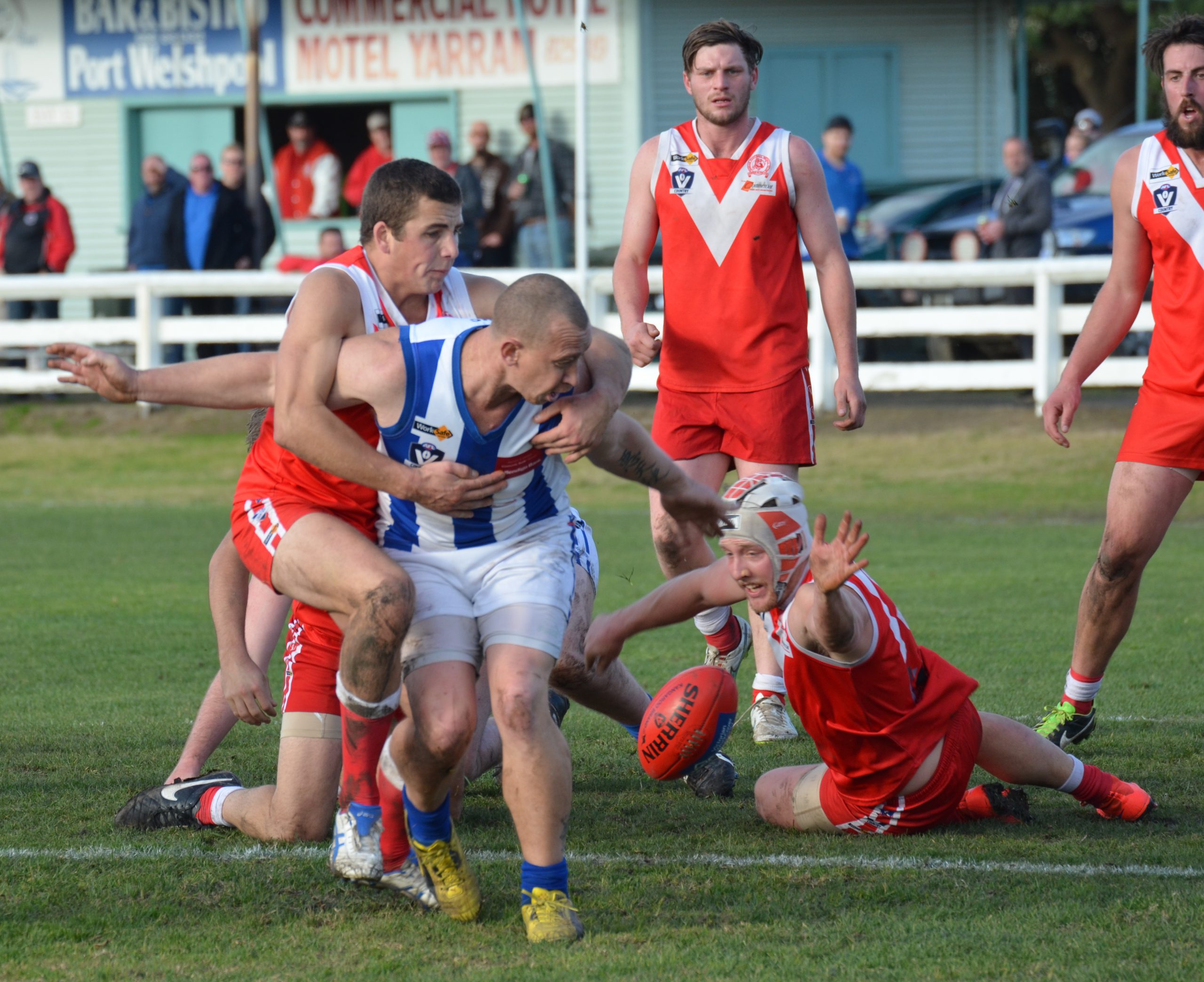 MATCH of the round billing went to Yarram and Heyfield however the battle between the North Gippsland heavyweights fizzled after half-time as the Demons strolled to victory.

In exceptional form, the Demons were bolstered by the return of full forward Justin Staley.

Grinding out a 16-point buffer at the first change, the home side quickly had last year’s runners-up chapping at their heels; the Kangaroos drew to within a major following the visitor’s four-goal-to-two term.

The Demons’ running brigade of Grif Underwood, Louis Rodaughan and Keifer Sutherland kicked away on the scoreboard in the third.

Their attack on the ball and centre clearance count was telling, as they ruthlessly sent their side forward time and time again with Staley, Corbin Sutherland and Ryan Underwood the main antagonists as they extended the margin out to 21 points.

With their backs against the wall, the Kangaroos could do little to stem the Demons’ flow of goals, and were humbled at the final siren.

James Beha was the pick of the goal scorers for Heyfield finishing the contest with three while James Conway and Daniel Missen were among the better players.

COWWARR stood tall to hold Sale City to a draw in an intriguing contest.

Little separated the sides in their earlier encounter, 26 points on that occasion, and it could not have been closer in the return bout, as Cowwarr managed 15.6 (96) to the Dogs’ 14.12 (96).

Taking a 10-point lead into the first change, the Saints started strongly with Pat Tainsh and Shane Morgan influential.

The Dogs outscored the visitors in the second term to lead by nine points, with Rowan Bell and Hayden Burgiel making their presence felt.

Sale City mustered plenty of play in the third term, and could have extended the margin further if not for a few wayward shots on goal.

The Saints in turn troubled the scoreboard for four majors, to arrest the deficit back to a straight kick at the final break.

Cowwarr rallied, keeping with the Dogs as the sides exchanged blow for blow in a dogged final term.

For the Saints Linden Brunt was the pick of the goal scorers with four in a solid showing, with Tommy Patle among the notable contributors.

City was well served in front of goals by Nick Grainger, Mitch Bennett and Brendan Rathdowne, while Jake Milham and Keenan Hughes were standout performers.

A TRIO of former AFL players added to the quality of second-placed Rosedale, as the Blues railroaded Gormandale after half-time.

What started as a competitive showing by the ninth-placed Gormandale, who went into the contest with their captain Luke Hegarty and full back Brent McFarlane, quickly turned into their worst nightmare as the contest went south.

Faced with the prospect of containing the Blues with the added depth of former Hawthorn ruckman Max Bailey, Andrew McQualter and Tim Clarke, the Tigers were impressive early with Jaryd Gilroy given the tough assignment of containing Bailey.

Rosedale was quick out of the blocks, registering the first two majors, with Gormandale’s first coming eight minutes into the term.

The Blues posted the quick response before Gilroy had the Tigers’ second, with the visitors not intimidated.

Trailing by five majors, Gormandale opened proceedings in the second with their first coming in under a minute on the clock.

With the score slowly drawing away from them it was a flat-footed Tiger outfit that emerged after half-time.

What started as a procession of majors to the Blues finished as a run of 15-straight, while Gormandale was held goalless.

Bailey and Clarke finished the contest with five majors, while Macreadie and McQaulter chimed in with four-apiece.

Brad Scott was named best on ground for Rosedale with Craig Bourne and Rowan Diamond starring in the win.

EIGHT majors apiece to Churchill’s Tim Darby and Nick Campbell were among the highlights reel as the reigning premier moved back into the top five with a 73-point victory over Woodside.

Booting 16 goals to five in the opening half the Cougars were at their best.

GLENGARRY served it up to a slow starting Traralgon Tyers United, before the Bombers stormed away with a seven-goal-to-one third term to bury the Pies.

While their efforts were gallant in the opening half, the Magpies began to fade as the Bombers small forwards Lachlan White, Brian Graham, Chase Saunders and Stephen Hawkins piled on the goals.