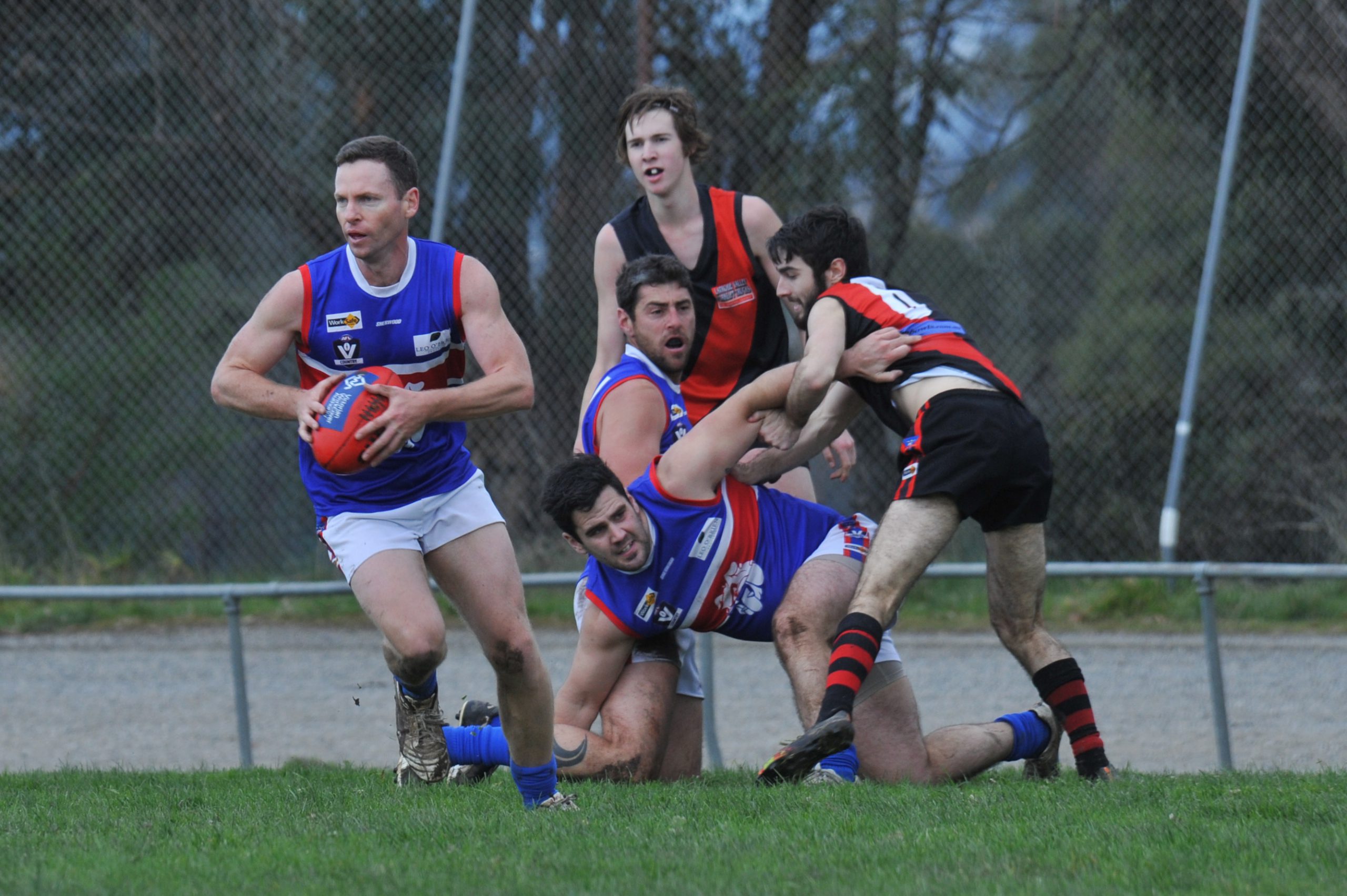 Sitting side by side on the premiership ladder standings the contest was an early preview to what spectators might see in the first week of finals.

Evenly placed it would be the Dogs’ seven goal to two third term, engineered by coach Hayden Burgiel with his bag of six, which proved telling.

The final term was an old fashioned shoot out as the sides exchanged blow for blow on the scoreboard, but City’s third term lead served it well at the final siren.

The Bombers rallied to outscore City six goals to five but it wasn’t enough.

It was all one-way traffic in the opening 25 minutes of play as Cowwarr flattened the home side, dictating play on its terms while making the most of its opportunities in front of goal.

Gormandale was presented with the opening scoring shot of the contest when ruckman Al Jenkin was the recipient of a fast delivery, hitting the tall target on the chest.

Jenkin’s shot on goal fell short in the goal square.

Rushed through for a behind, the Saints’ backline drew clear from the defensive arc.

Both sides squandered chances in front of goal before Chris Distefano, running tight along the boundary, opened proceedings for Cowwarr.

Winning the contested football Pat Tainsh was a ball magnet early, and with his electric pace from the centre clearance looked to set up Robbie Ferguson.

The small forward was lively as he snapped a behind before breaking through for his first major.

Ferguson backed up Brett Street’s major with Cowwarr’s third as they pressured the Tigers’ defence into making undisciplined errors.

Steve Burgess gifted Marcus Twomey his first as his clearing kick from defence went straight down the throat of the Saint.

The scoreboard told the tale as Todd Mann registered the Saints’ fifth major, as the visitors built an imposing lead.

Trailing by five goals, the Tigers responded with a quick goal from the opening bounce to Sandy, who became the man of the term.

In a mirror image to their opening two majors, the Tigers’ midfield brigade drilled the ball into attack and Sandy was on the receiving end of a 50 metre penalty and slotted through not only his, but his side’s third.

Cowwarr backman James Pryde pushed Francis aside as he positioned himself under the ball to take the mark, and the umpire was quick to blow the whistle with a free kick resulting in a fourth straight goal.

With everything going their way, the Tigers relished the conditions in the second term as the Saints struggled to clear centre half-forward.

Throwing the ball on the boot from outside 50, Sandy added another to his tally to lock scores level.

Sandy would add a further two to close out the second stanza with six majors pencilled against his name.

Cowwarr’s sole goal for the term came through Ben Coffey who was moved from defence to the forward line ahead of half-time.

The Tigers had reversed a five goal deficit into a 15-point lead at the long break.

The third term continued in line with the previous quarter of play.

Sandy opened with his seventh when the forward was on the end of a solid piece of play led by Solomon.

In his return game from injury, captain Luke Hegarty hit the scoreboard and sweeping half-back defender Tom Brennan pushed forward to add another as the floodgates threatened to open.

Despite being held relatively quiet, Tiger Joe Colaciello put the afterburners on along the wing and his delivery into Sandy resulted in defender Linden Brunt being paces behind.

Saint Ferguson broke the Tigers’ four goal burst with his second, but Hegarty got the quick reply.

Productive forward target Sandy accounted for two opponents, with his second term the most damaging.

His 10-goal haul was a first for the relatively new forward.

Brennan was superb in mopping up the loose ball and cutting off the Saints’ delivery, and combined well with full-back Brent MacFarlane.

Ruckman Jenkin continues to evolve while Solomon led from the front in the engine room.

Cowwarr lost coach Luke Cooper to injury half way through the contest, Brett Street was lively in a three vote performance with Sean Alexander and Brett Grieve solid performers.

CHURCHILL delivered a crushing blow to Yarram’s finals hopes in a 10 point victory which knocked the Demons outside the five.

Little separated the sides throughout the all-important clash; Yarram held a four point buffer at the first change which drew out to 19 at the long change.

Andrew Kiely and Justin Staley were the key targets in front of goal for the Demons.

The premiership term was an old-fashioned grudge, as both sides only managed to add a major each, though the Demons appeared to have the momentum going into the final change.

With their finals aspirations on the line, reigning premiers Churchill saved the best ’til last, slamming home six majors to one in the final stanza to effectively double their score from the first three quarters and win 12.8 (80) to 9.16 (70).

The goals for the Cougars came through Nick Campbell, Leigh McDonald and Brendan Holt, with captain Chris Williams superb.

competition front runners Rosedale made light work of their lesser ranked opponents Glengarry to bolster their stock in the jostle for finals positions.

Rosedale’s Jack Tatterson was a beast, bagging a haul of 10 in his side’s 179-point thrashing of the Magpies.

The ladder leaders simply proved too good for the bottom-placed side who were held goalless after half-time.

The Blues’ goals came through nine individual scorers with Jeremy Reid (four) and Corey Beaver (three) the next best to Tatterson.

Adam Diamond continued his solid form to be named best a field for Rosedale, with Chris Wangman a standout for the Magpies.

HEYFIELD’s inaccuracy in front of goal kept the Wildcats within arm’s reach early in the contest before the Roos’ work rate and pressure became too much to bear.

Leading by seven points at the first change the Kangaroos, through best on ground Kodie Woodland, put the foot down for the remainder of the match.

Heyfield scored 7.4 (46) to a straight kick in the second term to take a commanding nine-goal lead into the break.

With their finals ambitions on the line the Kangaroos did not falter as James Beha, Jordon Stubbe, Jesse Bedggood and Woodland were among the main men in front of goal.

The second half continued along the same vein as the second term as Heyfield outscored Woodside 14 goals to three to run home comfortable 127-point victors.

The win elevated last year’s grand finalists back into the five.