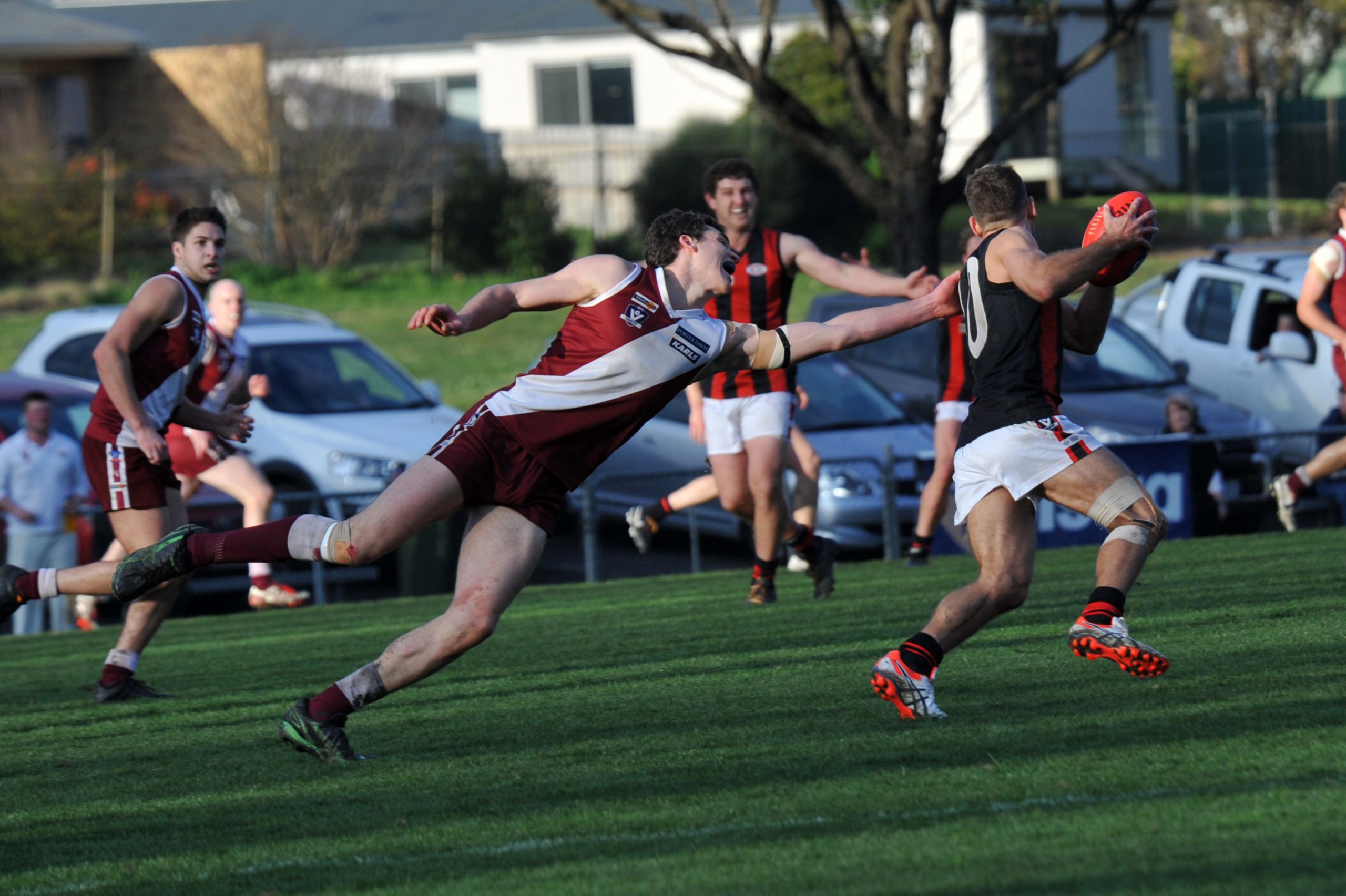 TRARALGON proved its premiership credentials on Saturday, fighting off a late comeback from Maffra to upset the ladder leader by two points.

“On our day we can beat any of them,” an excited Maroons president Andrew Quenault said.

His enthusiasm is certainly justified with all 10 of the Maroons’ football and netball teams poised to finish in the top three of their respective grades.

“(It’s) awesome I don’t care what happens now, to me that’s a good year,” Quenault said.

The win cemented the all-important third spot for the Maroons who will now have the double chance come finals.

“We always believe that our very best footy can be good enough, but it’s about how often we can produce that,” coach Mark Collison said.

Saturday’s victory didn’t come easily for Traralgon, which was forced to thwart a late revival from the Eagles.

Maffra kicked five goals to one and almost stole the win in a dominant last term.

“It was very tense… we were 32 points up at three-quarter-time, they changed their game plan, we played ours, we tried to block it down, it just turned around 180 degrees. But we did just enough to hold on,” Quenault said.

The Maroons were a man down for the opening 15 minutes of the last team after Michael Jacobsen was sent off and reported for striking.

“Being one down was hard for us. We probably slipped back into a defensive mode and that opened the door a little bit, however our first three quarters were really pleasing,” Collison said.

The upset win came on a big day for the Maroons, which welcomed back the players and officials from its 2005 premiership when fittingly Traralgon upset another highly fancied Maffra outfit.

The Maroons used the celebration to reveal the re-signing of coach Collison and assistant coach Michael Stockdale for another year.

MAFFRA’S loss saw Leongatha return to the top of the Gippsland League table.

The Parrots went through the motions as they dealt Moe a 112-point thrashing.

The visitor slammed on nine goals to one in the opening term and never looked back.

Jake Best (5) and Cade Maskell (4) were among the Parrots’ 11 individual goal kickers.

Zac Vernon was best on ground.

WONTHAGGI cemented fourth spot with a big win over Drouin.

The loss could prove costly for the Hawks who are battling it out with two other teams for a spot in the finals.

Drouin has now slipped to seventh on the ladder, a game and percentage behind Sale and Morwell.

Wonthaggi led by a kick after a tightly contested opening term, before adding four goals to two in the second to take an 18-point lead into half-time.

The home team extended its lead ever so slightly in the third, before kicking five goals to three to run out a convincing 40-point winner.

Adam Cook starred for the Power, kicking six goals in a best on ground performance.

Ben Hughes was the stand out off the boot for the visitor, also with six.

SALE kept its finals hopes alive with a 51-point win over Warragul.

The Magpies got out to an early lead, but were reined in by the Gulls in the second as the underdog trailed by just nine points at half-time.

Sale kicked away in the third, before nabbing the four points with a five goal last term.

Former St Kilda player Jason Gram was among the standouts for the Magpies with five majors.

Scores were locked at 13-apiece after a hard fought opening term.

The home team made a break with a seven goal second quarter, but was outscored by the visitor in the third.

Bairnsdale repeated the effort in the last, however it was too little too late, with Morwell holding on for an important win.

Daniel Musil top-scored for the Tigers with four while at the other end Nathan Dennison kicked three for the Redlegs.