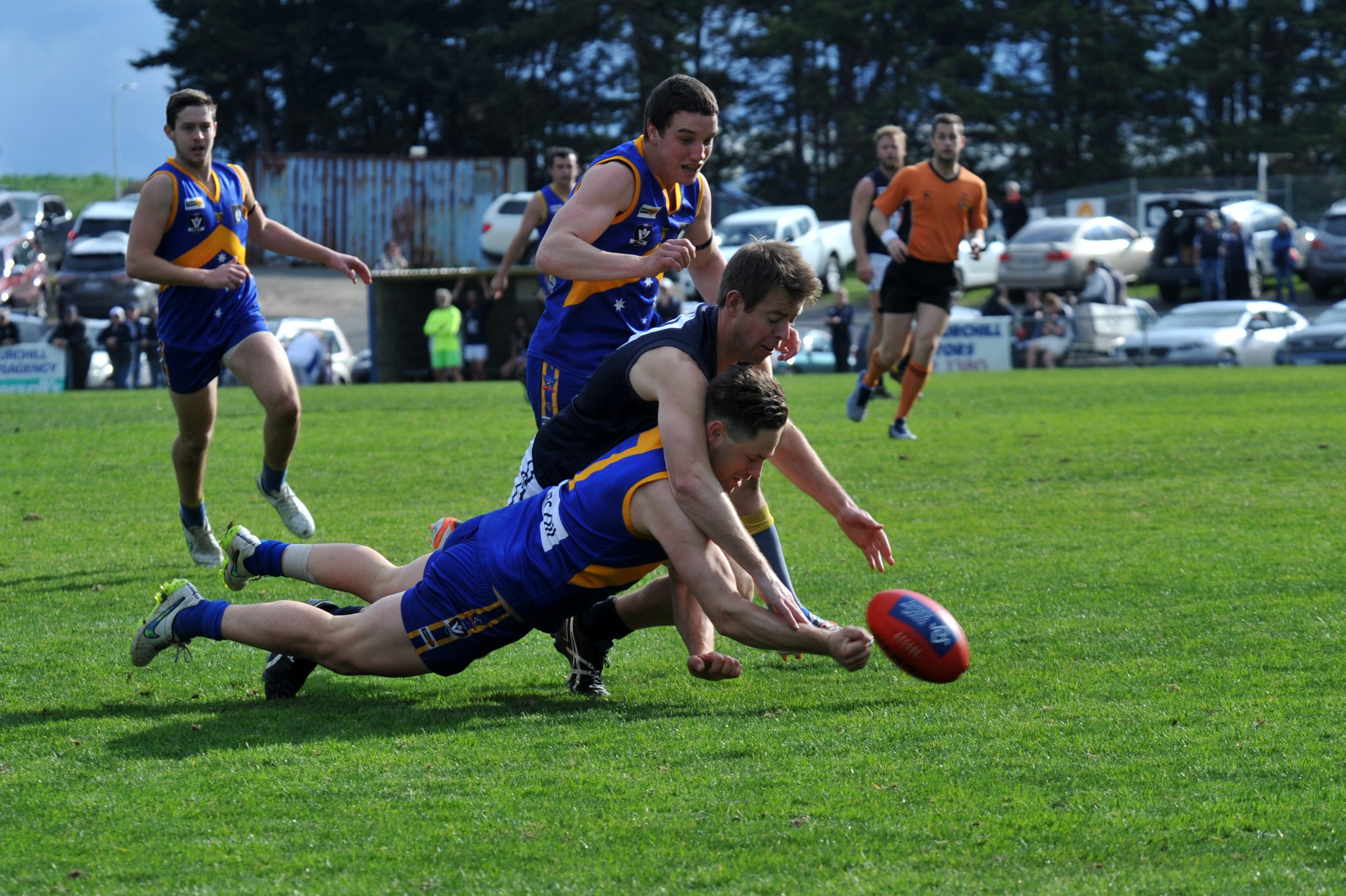 It was far from one way traffic in the opening half for the ladder leaders, who were bolstered by the inclusion of trio Andrew McQualter, Max Bailey and Tim Clarke, with the margin seven points in favour of the visitors at the main change.

The signs were ominous early for the Blues with coach Ben Macreadie combining with McQualter and Clarke to score.

Struggling to make the most of their opportunities in front of goal, the Cougars will be rueing the one that got away as they find themselves locked on 44 points with Heyfield and Yarram and relegated outside the five by percentage.

The match was evenly placed at the first change as the Blues took a mere two-point lead to the break.

Churchill regrouped with consecutive majors to Nick Campbell before the main break to keep the Cougars in the contest.

Booting 7.9 (33) in the third term, the Blues extended their lead with the Cougars’ defence at times stretched.

Continuing their second-half composure at the final change, the Blues slammed home a further five goals to two to record a comprehensive 46 point victory.

McQualter finished the match with four majors in a three vote performance, Dale Fleming, Macreadie and Bailey chipped in with two apiece with Rohan Diamond continuing his standout month.

For the Cougars best on ground Campbell booted three for the contest, Brendan Holt worked hard to set up opportunities and Jarrod Broadbent was tireless.

A blistering seven goal to one opening term killed the contest between fourth placed Heyfield and bottom of the table Glengarry.

Needing a win and a solid percentage boost, it was always going to be a tough assignment for the Magpies who were simply railroaded by a side which has sights set on a finals berth.

Proving no match for the juggernaut that is Heyfield the Magpies could only watch in awe as the Kangaroos ran home 33 goal victors to move back into the top five.

This week it was Kodie Woodland’s (six) turn to top the goal kicking tally as one of 14 individual scorers.

Nick Dinsdale and Matt Goodwin found plenty of it to boot four and three goals respectively, with best on ground Andrew Lambie solid off half-back.

The Tigers hit the ground running, slamming home three unanswered majors, with Jordon Sandy and Luke Francis among the goals.

It was an entertaining 25 minutes of play as the Dogs responded to the challenge as Brad Walsh turned the contest with a standout first stanza.

He took the contest on to score four of his match tally five goals in the first term.

The Tigers’ defence held strong under pressure; Kapun Morris was the swing man across half-back, mopping up the Dogs’ errant entries in to the forward line, with Sam Marks busy early as he worked the ball from defence.

Mitch Bennett opened his account of four with his first ahead of the quarter time siren which saw City’s lead out to 19 points.

Gormandale matched Sale City on the scoreboard in the second stanza, but it was City’s 13 goal to three second half that proved telling.

WITH its season on the line Yarram was forced to dig deep against an opponent who broke lines in Cowwarr putting the Demons to the sword early in the piece.

Breaking away with a five goal to one opening term the Saints commanded attention, again starting their challenge on the right foot.

Working their way back in the contest, the Demons’ inaccuracy in front of goal kept them behind but they reeled the margin back to 11 points come half-time.

It was an impressive performance by the Demons after the break, laying the foundations for their 16.21 (117) to 11.8 (74) victory with a six goal to two premiership term.

The side did not falter after final change and continued to steamroll the opposition, adding a further seven majors to coast to victory.

Ryan Underwood led the charge in the forward 50 booting six majors as one one of six individual goal scorers.

A 10 goal haul from TTU’s Brian Graham was just one facet of his highlight reel in a match winning performance against Woodside.

The intensity did not drop as they doubled their score while holding the Wildcats to a mere two behinds.

With the contest all but decided by the long change, the Bombers kept at it despite a lean third term.

Graham was a standout; he marked everything that came his way, made opportunities from nothing and left the crowd in awe of his skills and awareness of the goals.

Graham was not the only sharp shooter with Tom Mustoe and Stephen Hawkins were among the goals.