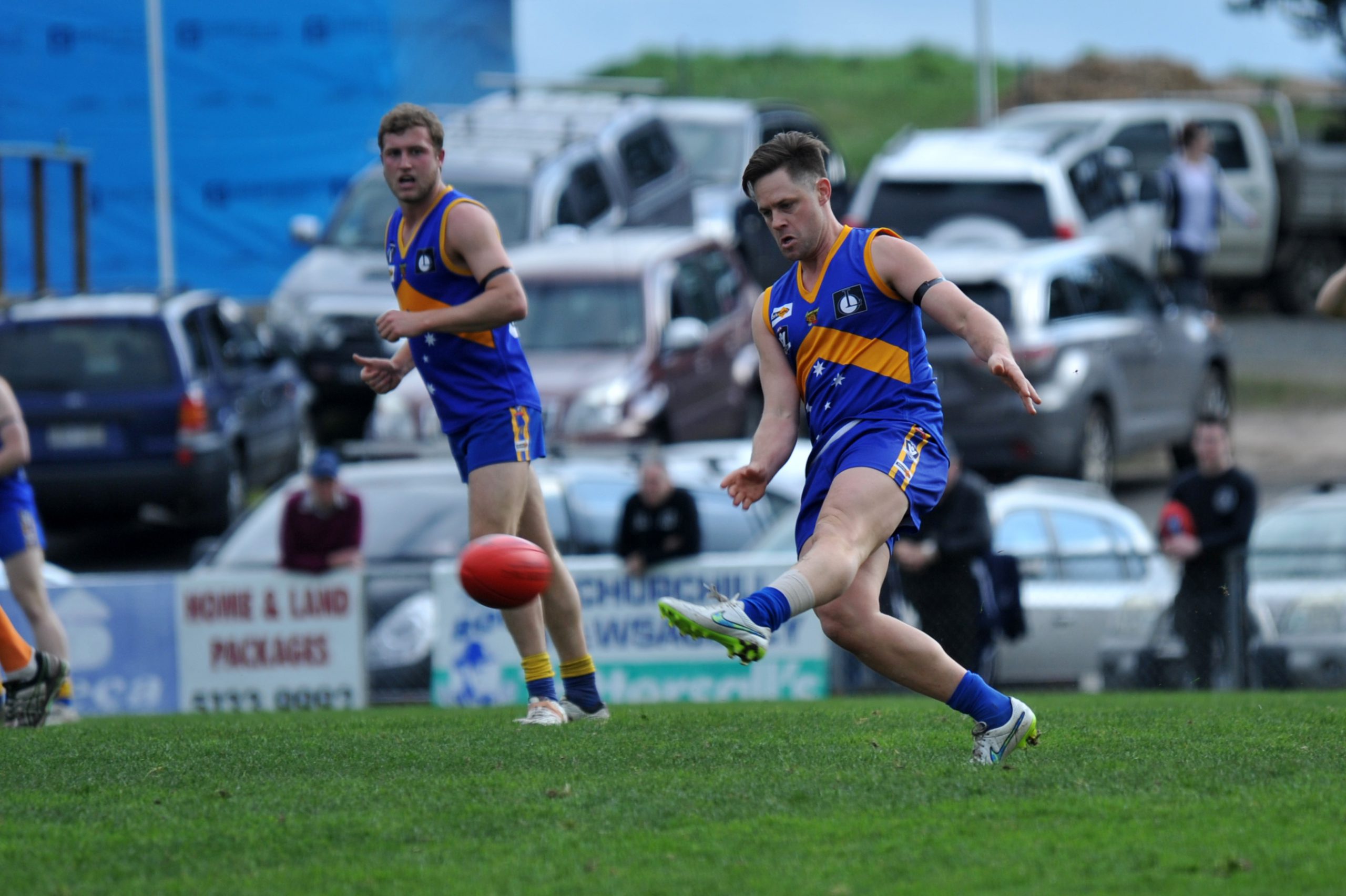 There were wild swings of momentum, a barrage of goals and a hard-fought comeback in the penultimate quarter which resulted in the Kangaroos slamming home four goals to one, to arrest back the lead and dictate the second half.

It was in stark contrast to the opening half in which Heyfield was meek while Sale City commanded respect.

City started the contest strongly, running forward with poise to register the first score of the game – a behind.

Nick Grainger had a chance to post the opening major but his shot missed all as the wind played havoc.

Jesse Bedggood and Daniel Missen also failed to capitalise on their early chances.

Nic Dinsdale broke the trend of behinds as the Heyfield goal sneak slotted through the opener of the contest on the run.

The Dogs rebounded off half-back and kicked their first through David Piasente before Heyfield followed suit.

Bedggood opened his account, Nic Dinsdale added his second for the term as he tallied possessions roving the ball in the forward line or sweeping across half-back.

Dinsdale’s second would be answered by three straight to the Dogs.

Brad McKay’s major was one for the highlight reel as he pounced on the centre clearance, took a bounce and brought the margin back to two points.

A low grass cutter shot from Jake Evans made it three in as many minutes and built a four-point lead at the first change.

The tone of the first stanza carried over into the second as Bedggood got Heyfield off on the right foot, scoring from directly in front. It was two straight as Jesse Jackway got in on the action, before Evan Johnson nailed the responding major.

An old-fashioned shoot out ensued with eight majors kicked as the sides went goal for goal. City coach Hayden Burgiel’s shot around the body bounced through as the intensity of the game increased, followed by a running goal to Beau Bennett to respond to yet another Heyfield major.

Heyfield defender Tom McMillan was left seeing stars after coming under friendly fire from a teammate which left him sidelined for the remainder of the contest.

Burgiel made it two for the term, handing his side an eight-point lead ahead of half-time. The Dogs continued where they left off in the first half, with the opening major of the third term, before the seasoned Kangaroos made their move.

The Kangaroos had their chances to further extend the lead but dropped marks and wayward kicks kept the door slightly ajar for the second-placed Dogs.

A major to Josh Stubbe at the 17-minute mark stole the lead back, before Nathan Wellins added another five minutes later as the Kangaroos reversed an eight-point deficit into an eight-point lead.

A juggling one handed mark by Beha stuck as he fell backwards and the shot on goal 25 metres out on a slight angle resulted in his second major ahead of the end of the term.

City’s hopes were dashed during the term with a season ending shoulder injury to Piasente.

Despite both sides hitting the scoreboard early the goal umpires were kept relatively quiet in the final stanza, with Heyfield doing enough to hold on, winning 13.10 (88) to 11.12 (78).

REIGNING premier Churchill steamrolled a flat TTU outfit in the elimination final, doubling the Bombers’ score in a one-sided affair after half-time to win 16.8 (104) to 7.10 (52).

Nine points separated the teams in a tight opening term, with both sides registering their first points before scoring completely dried up.

It soon became one way traffic as the Cougars packed numbers around the stoppages, with their rovers reading the taps better and pumping the ball into a wide open forward line containing Hamish Towns, Nick Campbell, Brendan Holt and Tim Darby.

Brad Knowles, Chris Williams, Travis Brighton and Leigh McDonald were the main play makers as they amassed the contested possession and fed the ball into Towns and company.

Churchill opened proceedings before the architect of the forward 50, Towns, was on the end of a fast-paced kick from McDonald but the shot on goal sprayed the face.

Rebounding off half-back the Bombers made their way forward where Stephen Hawkins was quick to pass off to Brian Graham who got things under way with his first.

Towns got the quick reply with his shot from the pocket, and he was at it again when Brad Knowles and McDonald set up play in the middle of the ground to present Towns with yet another opportunity. Towns’ accuracy failed him with a point registered, before he made it two for the term as the Cougars appeared poised to skip clear.

TTU went one man down following the yellow carding of Hayden Hector but Churchill struggled to capitalise on the extra man, adding just one major ahead of the first change.

The Cougars slowly gained the ascendency in the second through extreme physical pressure, finals experience and big name players rising on centre stage.

Darby got things happening in the opening minutes of the second term, before TTU responded through Jake Power to reel back a major.

Missed shots to Hawkins and Hector halted the Bombers in their tracks before Rhys Martin ran into goal to bring the margin back to three points.

The Bombers scored from the errant kick in to hit the lead, but it was short lived as Churchill’s Knowles wrestled back the lead.

Further majors to Holt and James Allan, who benefited from Darby’s vision from the boundary line, put Churchill in the box seat.

The premier hit six straight and the third term belonged to the Cougars.

From that point the match was a foregone conclusion; late majors to the Bombers chipped away at the deficit, however the damage had been done early.