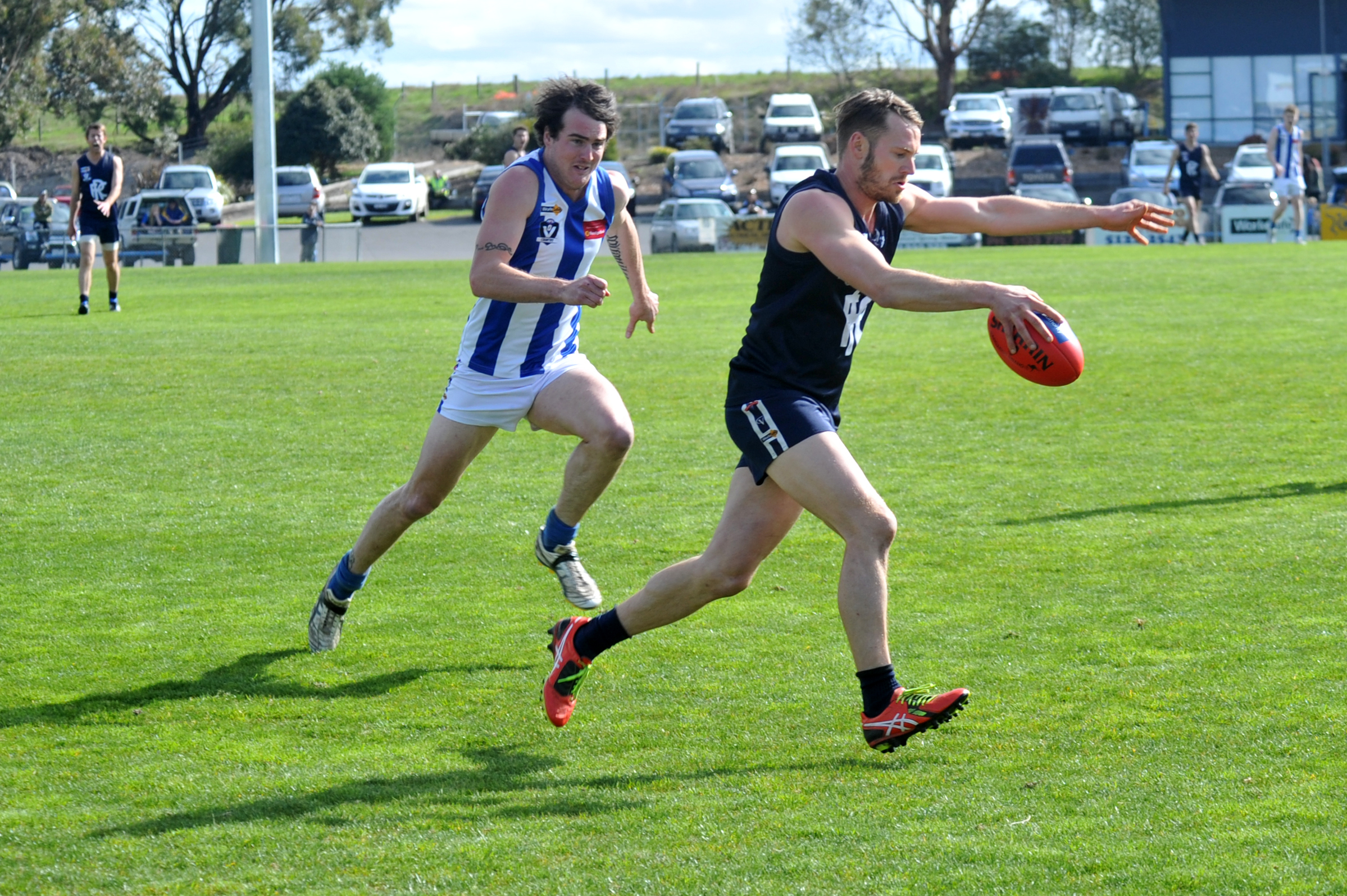 The road to the big one has been divergent for the competing sides.

For first-tyear Rosedale senior coach, Ben Macreadie it has been a fairytale season; the Blues finished top and have been required to play just once in the past three weeks.

September specialist Heyfield has been far from its imposing best this year, but has reached the grand stage nonetheless.

While the Kangaroos finished third they were only one point away from missing finals action altogether.

Instead they seized their chances to secure a fourth straight tilt at premiership glory.

Both coaches see the midfield battle as integral to the result, though the Blues’ engine room holds the edge over Heyfield.

League team of the year members, Macreadie and Dale Fleming, can quickly turn a game and were instrumental in the semi-final victory against Heyfield.

Runner-up in the league best and fairest, Fleming will no doubt draw the attention of Heyfield’s taggers, likewise Rohan Diamond who ran amok from half-back and along the wing, in their last meeting.

“Their midfield brigade is unprecedented. They have eight to 10 quality midfield/half forwards, I haven’t seen as good a group in the one team since I’ve been in the league,” Heyfield coach Damien Birss said.

“They are a quality midfield, there is class throughout their team. We need to find a way to restrict their scoring ability.”

The Blues mids are set to meet classy opposition in the form of James Conway, Adrian Cox and Josh Stubbe.

Stubbe will be committed to winning the contested possessions, Andrew Lambie will marshal the backline in his customary fashion and Matt Goodwin is likely to shade one of the Blues’ key play makers and set up Jesse Bedggood, James Beha and Leigh Brown in front of goals.

“There are a number of areas that will have influence over the game, but I guess none more that the midfield battle,” Macreadie said.

“We need to limit their inside 50’s which will go a long way to us having a chance of winning.

“There are a number of players that will be needing a close check. We pride ourselves on that every week though.”

THERE will be mixed emotions for Heyfield coach Damien Birss as he bows out of the coaching caper, regardless of this weekend’s result.

Taking to the helm for his last game, Birss comes up against the club that gave him his first opportunity to turn his hand to coaching.

“I’m incredibly grateful for the opportunity that Rosedale gave me to coach when I finished playing,” Birss said.

“To be coaching my last game against the club that gave me that opportunity, in the grand final, with the club (Heyfield) that I have enjoyed great success with over the journey I will be hoping that the footy gods are smiling down on me.”

It will be a case of the master and apprentice doing battle as Birss’ opposite number Ben Macreadie endeavours to outmanoeuvre the experienced campaigner.

The 2015 Heyfield unit is the fifth side Birss has seen through to the big one. He boasts the remarkable stat of having been involved in 13 grand finals as either player or coach in a 17-year period in the league.

Still without success as a coach on grand final day, he was nonplussed about the so-called ‘Birss curse’.

“People target the negatives, I tend to look at the positives,” Birss said.

“It certainly isn’t my focus – my run of results. Sure you want to win, but at the end of the day I have coached five teams in five years that have gone through and had an opportunity to play in a grand final.

“Since 1997 the Heyfield Football Club has played in 13 senior grand finals in 18 seasons. Only two players in the side don’t live or come from Heyfield and both of them have played for us for the last four seasons.

“We continue to be one of the top two teams year in, year out. We are nowhere near the strongest team in the competition on paper, but if you keep persevering you will eventually get there.”

Ironically Heyfield’s last premiership came against Rosedale and their then coach Birss in 2012.

FOR the apprentice Macreadie, who returned home to coach former club Rosedale this season, a tweaked list and game plan has led to great success.

“I wouldn’t say that we have exceeded any expectations,” Macreadie said.

“The group finished fourth last year and we added some players to that group and with that had some belief that we were on the verge of something.”

With just the one win needed to complete a fairytale season Macreadie is confident his young side can handle the attention in the lead up to game day.

“We will train as usual this week and will be looking to get ourselves in the right frame of mind. The week break for us is fine. We managed with it the first week and we have gone about it in the same way again,” Macreadie said.

“The group isn’t one that needs reminding of becoming complacent. They are all level headed young men. They have been part of losing grand finals and know that pain.”

Like his counterpart, Macreadie has studied intently the opposition’s game plan and knows that past results will account for nothing come the final siren on Saturday.

“No matter the opposition, we respect and defend where needed and attack where possible,” he said.

“There has been an even spread of contributors every week for us and that must continue for us to be a chance this weekend.”

IN a prelude to the main event minor premiers Heyfield and Churchill will take centre stage in the reserves final.

Saturday’s final marks the Kangaroos’ ninth in an 11-year period.

While the club has dominated the competition they have only won three titles since 2005.

Holding strong in the preliminary final, the Cougars finally navigated the long road to the big one.

The ledger stands at one apiece this season between two evenly matched sides.

TTU thirds will be out to reverse the disappointment of last year’s grand final loss in this weekend’s decider against Glengarry.

Both sides have travelled through the season rarely troubled, though TTU has the head-to-head advantage.

The Bombers railroaded Glengarry a fortnight ago to advance to the grand final following a 18 point victory. TTU will turn to key play makers, named in the league team of the year, including Nick Miller, Zane Spiero and Zach Kilgower.