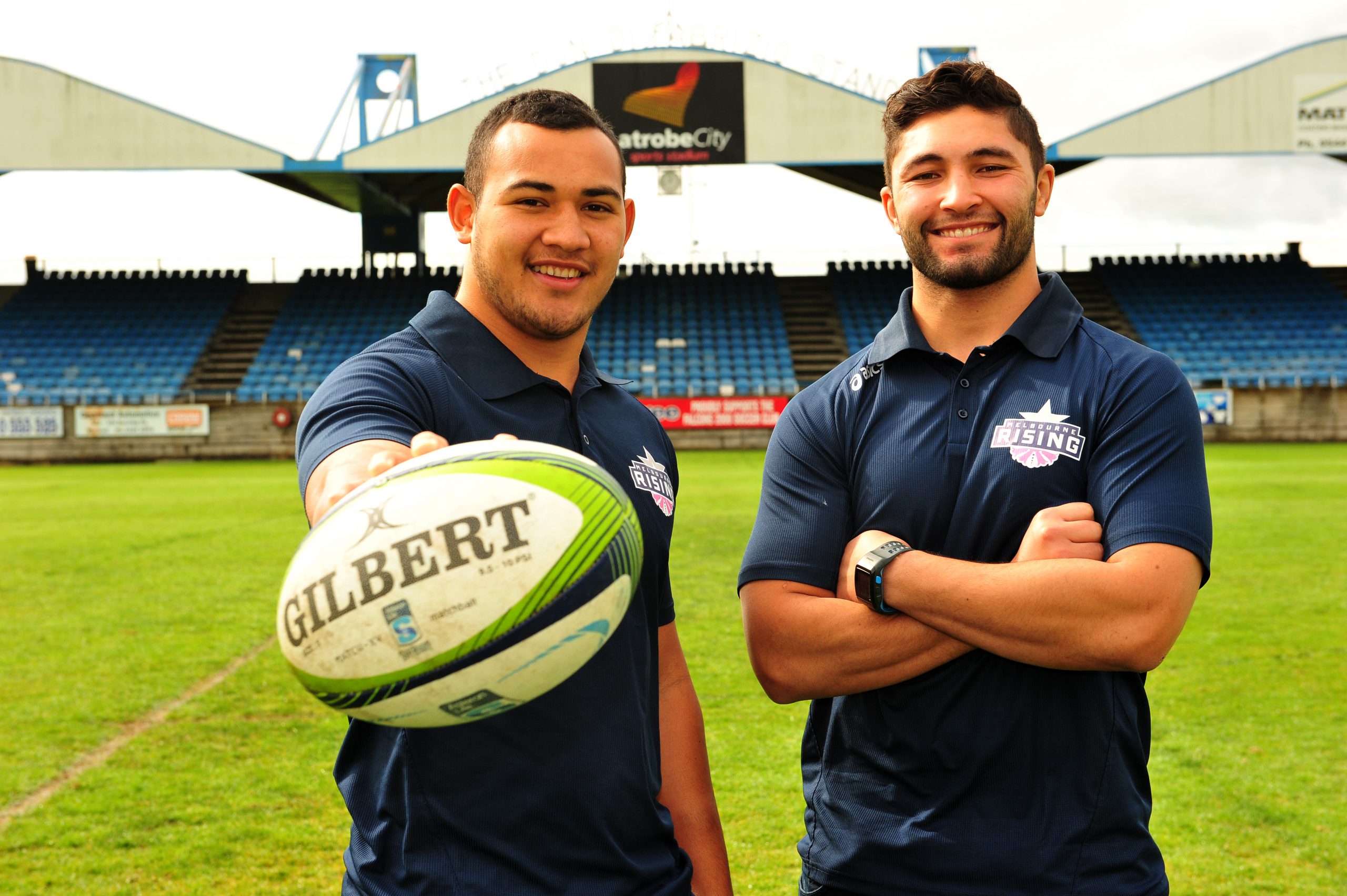 CODE hoppers Israel Folau and Karmichael Hunt saw the light, now it is the Aussie Rules-mad Latrobe Valley’s turn to embrace the game they play in heaven.

Gippsland’s staple Sherrin will be replaced by a Gilbert on Saturday when the National Rugby Championship round five clash between Melbourne Rising and Greater Sydney Rams takes centre stage at Latrobe City Sports Stadium.

A smorgasbord of Wallabies and Super Rugby talent will be on display in the union showcase, featuring a modified ruleset to help the uninitiated spectators get into the game.

Rising and Melbourne Rebels rah-rah stars Colby Fainga’a and Jonah Placid said Saturday’s fixture would be a spectacle for both rugby aficionados and the utterly clueless, alike.

“I think the way this competition goes with the kind of style of rugby you have to play, it’s a lot of attacking rugby, it’s probably easier to watch for guys that don’t really know rugby too well,” Fainga’a said.

“It’s an easier game to come and watch and be entertained before you get to that more professional level where it’s a lot more tactical and set-piece structured.”

NRC rules include extra points for tries relative to penalty goals, quick line-outs and time limits on scrums which all combine to create a rugby sevens-style of fast paced, frenetic footy.

The domestic competition was introduced last year as a bridge in the development pathways towards Super Rugby and Wallaby selection, bringing together club, state and national players.

Rising co-captain and flanker Fainga’a, the younger brother of Wallaby twins Saia and Anthony, said the format had proved popular to date.

“The Super Rugby season is so short, it only goes for 18 rounds or something, by the time you’re getting into the rhythm of things the season’s over and you’ve got to wait eight months,” he said.

“It’s good having this competition in place; you’re still getting a good quality of rugby and… the way the game is you get to focus more on your attack.”

Several Wallabies are in the running to make an appearance at Falcons Park.

Luke Jones and Dom Shipperley, as well as Tom English, have returned from representing the famed Barbarians Rugby Club in London and are back in the selection mix for the Rising.

Fainga’a said he hoped the quality on offer would attract some curious locals to the game.

“I think it’s good we kind of come out here and try to get a broader fanbase, whether or not it’s to our team, even just to get some AFL converters to rugby union,” he said.

“Games like these, and we’ve also played in Geelong and Frankston… can hopefully get some more rugby converts.”

One of the men sure to light up the park is outside back Placid.

A star of the past three under 20 world rugby championships, the U20 Player of the Year nominee scored a try on debut for the Melbourne Rebels in Super Rugby this season and will be looking to cross the line a few times in Morwell.

“For an outside back you get more opportunity to get the ball out wide and show what you’ve got,” Placid said.

“(Normally) you get three points for kicking a penalty goal, most teams take that, but in this comp no-one ever goes for goal.”

The main game kicks off at 2pm, with an unofficial ‘Army versus Navy’ precursor between Puckapunyal and Cerebus from 11.30am.

What: National Rugby Championship Round Five

Entertainment: The Island Breeze Rugby Plus group will perform a traditional Fijian cultural dance at 1.20pm.