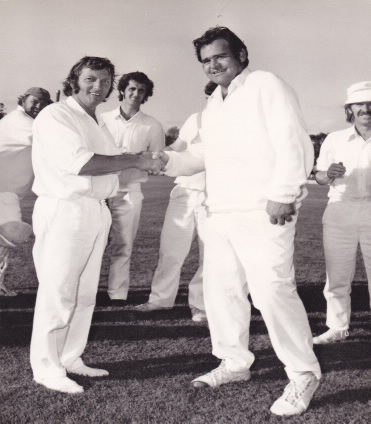 THE greatest all-rounder in Central Gippsland Cricket Association history, Ron Marslen, died on 30 January at the age of 81 on the Sunshine Coast.

The CGCA life member, inducted in 1982, scored more than 10,000 runs and captured 932 wickets during his long playing career, and represented the association at Country Week a staggering 27 times.

Already immortalised in the league – with the second grade best player medal named after him – Marslen was remembered fondly by his contemporaries as a great on and off the pitch.

Morwell Cricket Club leading run-scorer and former long serving CGCA president John White played both with and against Marslen from the 1960s, sharing in a couple of premiership titles along the way at Yallourn.

White recalled a great competitor who was always as ready with a deck of cards in case of a washout as he was at the wicket with bat or ball in hand.

“He was a very tight bowler, a hard hitting batsman and a great gully fieldsman just to complete his all-round ability,” White said.

“The interesting thing I found about him with his bowling was he didn’t turn it very much.”

Marslen would often bowl with the Yallourn captain of the time, a former South Melbourne player named Norm Byrne, who spun it a mile, and would often reap the rewards of his skipper’s rip.

“Marslen would come on at the other end and turn it about an inch and people would be playing for the turn… and he’d be going straight through them, so it was a good combination.”

His batting was particularly explosive, with White distinctly remembering a savage century he struck at Moe High School which included eight sixes.

Marslen accumulated 27 A grade centuries, played in four top grade premierships with Yallourn and Yallourn Colts and won the Byrne-James Medal for best player in 1975-76, the same year he scored 116 not out and claimed 7/60 in one GCL match against Leongatha.

In 1969-70 he won both the A grade batting and bowling awards, but some of his best performances were reserved for representative cricket.

He virtually won a Country Week group final single-handedly against South Gippsland in 1980-81 when he made 87 not out and claimed 7/46 with the ball.

He also caught the eye of former Australian cricketer and ‘King of Collingwood’ Jack Ryder while compiling another Country Week ton, who asked to meet him at the conclusion of the innings.

When he did he could scarcely believe Marslen was more than 40 years old at the time, having expected his explosive talent from a younger man.

“He was absolutely surprised, he thought it was a young bloke but a bloke in his 40s came up to meet him,” White said.

Marslen was also a talented, hard-nosed footballer for Moe for a number of years and a great host to his teammates.

White said Yallourn cricketers would go shooting with him on his farm, then play billiards at his house until all hours of the morning.

Despite moving to Queensland, Marslen came back to Gippsland a couple of times a year and caught up with old cricketing mates, including another former teammate and rival, Graeme Freshwater.

Freshwater said Marslen was a tough man and a hard competitor who “was always out to win and never gave up” and rated him as one of the top half dozen players of his era.

“When he was a captain if the opening bowlers took a wicket in the first three or four overs he was on – he was a fairly fast swing bowler, he tried to bowl off spinners – he never got a lot of turn but he was always very accurate,” Freshwater said.

“He did very well (at Country Week) he’d take on the best of them… it didn’t phase him, he’d beat anyone.”