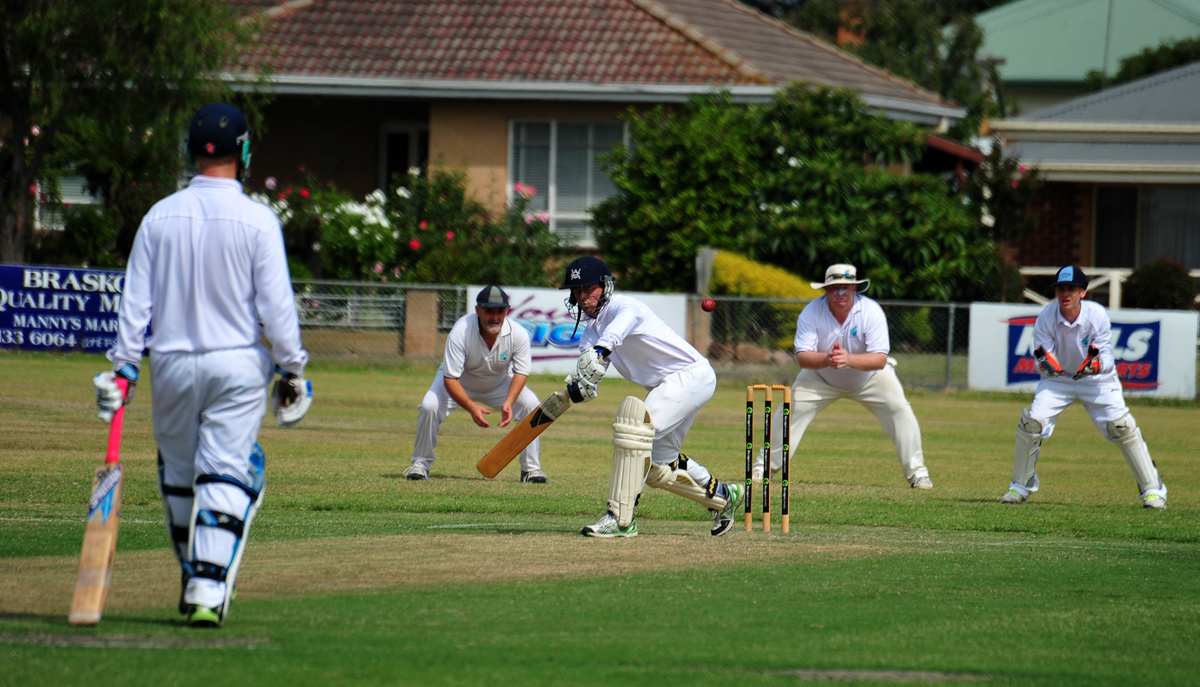 A towering six from the final delivery of the match sealed a dramatic central Gippsland cricket semi-final outright win for Mirboo North over Morwell yesterday.

With six required from the last ball Rob Phoenix opened his shoulders and carted Brendan Brincat into the Morwell Recreation Reserve grandstand to send Mirboo North supporters into raptures.

In an extraordinary match Morwell won the toss and opted to get first use of the surface, but Liam Smit bagged opener Jackson Beani for a duck.

When he followed up with the wicket of Morwell captain Rory Hare, the home side needed to knuckle down.

Craig Giddens battled hard for his 41 while Riyaz Pathan dug in at the other end for his 30.

Rob Phoenix and Dale Banks bowled well in tandem as Morwell collapsed from 3/84 to 118 all out, losing 7/34 in the process.

Morwell needed early wickets to keep Mirboo North under the pump, but Jesse Giardina and Adam Mates added 31 for the first wicket before Brendan Brincat swung through the top order, claiming the entire top four in his six-wicket haul.

Giardina top-scored with 23 and was one of only three bats to reach double figures, the others being Mates and Josh Taylor, as Mirboo North was dismissed 11 runs shy of the first innings target.

Mirboo North began day two needing everything to go their way in pursuit of an outright win to salvage the game.

Pathan dug deep but started to run out of partners as the desperate visitors attempted to extract wickets.

The innings was eventually wrapped up and with 23 overs remaining in the game, Mirboo North needed 110 for a miracle comeback.

At 2/15 early in the chase it looked like Morwell was frontrunner, with Pathan’s spin choking the scoring rate.

Brincat was bowling well at the other end and the side was backing up fantastically in the field, with some excellent catches in the deep.

Phoenix was given one let-off and guided the chase to the last couple of overs to leave the equation at 27 off two overs.

The penultimate over saw one boundary and some quick running meant 14 was required off the final over, to be bowled by Brincat.

Steve Rogers was run out sacrificing his wicket to get Phoenix on strike for the last ball with Mirboo North needing six to win.

Brincat went for the length ball on off-stump but pitched up too far, as Phoenix hit the ball over the rope to break Morwell hearts.

LATROBE reached its sixth consecutive grand final after knocking Trafalgar out of the 2015/16 competition in the weekend’s other semi-final.

The Ships won the toss and batted first and were nervous early as Latrobe had two appeals for caught behind against James Blaser turned down before the opener was given out for two.

Jackson Noonan had been promoted to open and teamed up with Aiden George at first-drop to add 67 before they were dismissed by Chris Johnson and Tyron Gamage.

Matt Brewer claimed the key wicket of Trafalgar captain Rhys Holdsworth, caught in the outfield by Johnson, who followed up by bagging Todd Mann for a duck.

When Latrobe captain Brendan Evans picked up Brodie Burgess for 25 the wind had well and truly gone from the Ships’ sails and they were all out for 140.

The first over of Latrobe’s innings was an unmitigated disaster, with Justin Vajler nicking one behind to Blaser off Mann, and two balls later Matt Brewer ran himself out for a duck.

When Mann broke through Tim Cranwell’s defence the Sharks were 3/11 and in serious trouble.

Steven Freshwater (31) and Anthony Bloomfield added 52 to calm the nerves before Aiden George held onto an edge off Noonan.

The match was evenly poised with the score at 4/63 when Will Kennedy joined Bloomfield at the wicket, and the pair slowly took control as they negotiated bursts from Mann, Noonan, Daniel Heathcote and Leo Connolly.

The Ships had two good shouts against Bloomfield turned down, one for lbw and the other for a catch behind, and the veteran made them pay as he and Kennedy added 67 to take the Sharks to the brink of victory before Kennedy was dismissed.

Johnson helped Bloomfield find the winning runs as Latrobe’s highest first-grade runscorer finished up with 73 not out.

B and C grade

Morwell and Mirboo North will play off in the second grade grand final to be held at the Peter Siddle Oval, while Willow Grove will play Mirboo North for the third grade premiership trophy on the Maryvale Reserve number two ground.

Mirboo North has achieved the difficult feat of getting all senior grades through to the decider.