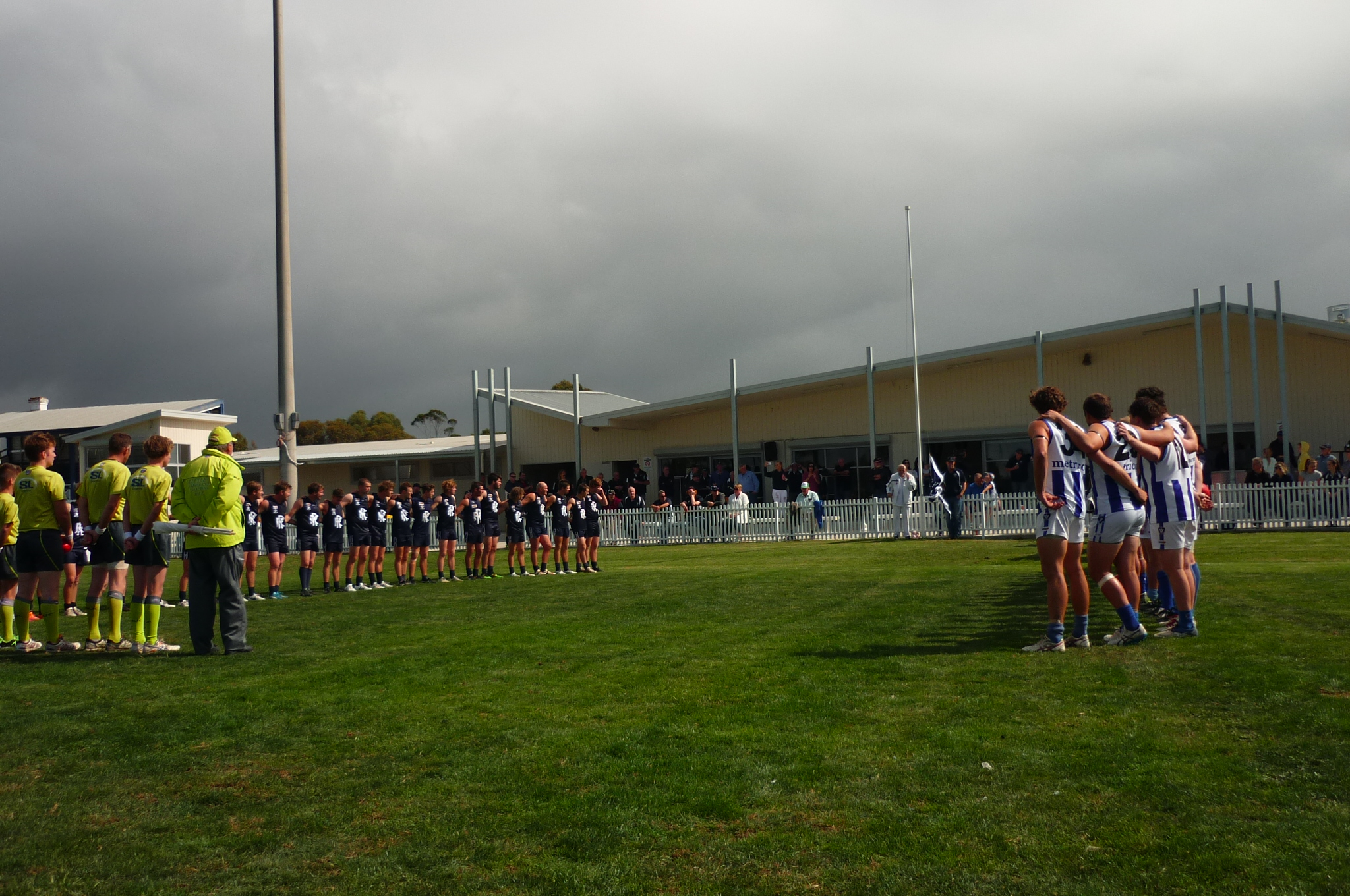 New Rosedale captain-coach Sam Bristow said he was pleased with the way the Blues put their bodies on the line, their running game, and the way they controlled the centre corridor.

“The boys used the ball really well, especially when they link up with the mid-field. I was happy with the win,” Bristow said.

“I love the challenge of the new role. I really want our club to see success this year.”

The 2015 grand final flag was unfurled before the game but after the official formalities it was down to business.

The Kangaroos jumped from the blocks early, acing a six-pointer within the first 30 seconds.

As it happened, this was to be the only time they would lead during game.

When Alex Whitehill kicked truly at the 15 minute mark, followed by McDonald a minute later, the momentum swung back Rosedale’s way.

Fierce tackling and good use of the ball paid off for Rosedale, and when Jack Tatterson snapped truly at the 20 minute mark, the signs were ominous.

Late goals to Frazar Brouns and McDonald sent Rosedale to the quarter-time huddle with a comfortable five goal to one lead.

It was a different story at the start of the second quarter as Heyfield mounted a spirited challenge.

The ‘Roos held Rosedale up well in the stoppages and started to play possession football which halted the Blues’ run.

When Jordan Stubbe slotted through at the 10 minute mark Heyfield was back within three kicks.

However, Jesse Jackway wasted a valuable opportunity at the 14 minute mark and Rosedale capitalised at the other end in a 12-point play to shut down Heyfield’s momentum.

Jeremy Reid was solid in defence for Rosedale and used his stature to repel Heyfield’s forward advances and preserve a 22-point lead at the main break.

The third quarter was an arm wrestle and the westerly breeze blowing across the ground from wing to wing favoured neither side.

Rosedale did apply scoreboard pressure and goals to McDonald and Jake Suter midway through the quarter kept Blues in front by a comfortable margin.

Again it held the Blues up in the stoppages and played the game on its own terms.

Possession football from the Kangaroos stopped the Blues’ forward momentum and when James Beha kicked his third goal at the 14 minute mark Heyfield was within three straight kicks again.

With plenty of time on the clock the Kangaroos were in with a fighting chance.

But their hopes were soon dashed when McDonald answered with the quick reply, and from that point on, the cracks began to show.

The fat lady warmed up her tonsils, Brouns snapped truly on the run to extend the margin out to 30 points and there was little hope left of a Kangaroos revival.

At the 24 minute mark, Matt Bond put the icing on the cake for the Blues, sealing a 40-point victory for the reigning premier.