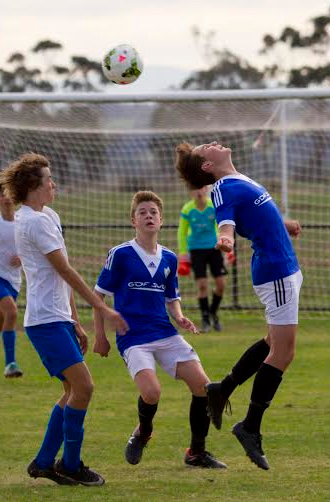 Gippsland FC had mixed results across the metropolitan south A grade age divisions at the weekend, but drew praise from coaches for buying into the game plan.

The under 14 team achieved its first victory of the season which means all teams have now recorded points.

Gippsland continued on its winning way with a comprehensive 9-1 away triumph against Skye United FC.

After taking the lead within five minutes, the side added another three goals before half-time to go in 4-0 up.

A quick goal after the restart stretched the lead to five.

After relaxing slightly, Skye pulled a goal back, but Gippsland kicked back into gear to round off the game with a further four strikes.

A successful day was soured by a late injury to Tombra after a clash with the Skye goalkeeper which led to a penalty.

The under 18s will play Noble Park SC this weekend in Melbourne while the other divisions have a week off before returning home to Trafalgar.

Last week’s comeback winners faced league leaders Casey Comets this week and fell too far behind to muster another revival.

Casey applied pressure from the start and Gippsland made some basic errors, gifting the host two goals from set plays.

The second half started well but an unfortunate own goal hurt confidence and Casey scored thrice more to make the score 6-0.

The Gippsland boys stuck to the game plan and in a switch of play scored when Jack Walton tapped the ball into the net after some good approach play.

The final result was a 6-1 win for Casey.

The under 14 side broke through for its first win of the season with a decisive 4-1 result against Brighton SC.

The visiting side went into half-time with a 1-0 lead thanks to a 25-metre screamer from Jarrod Ross.

The good form continued after the break when Adam Semple doubled the lead from the penalty spot.

A brief period of dominance from Brighton was rewarded with a penalty, which was missed, before the host scored in general play to make it 2-1.

Gippsland regrouped and rounded off the game with a half volleyed strike to Blake Zimora and a second goal from Ross.

Gippsland FC suffered a 4-2 loss against East Bentleigh but put in a solid shift and played exactly as the coach instructed.

Despite not getting the rub of the green with a couple of decisions the side had enough chances to secure victory, but they were not taken.

The scorers for Gippsland FC were Cory Johnson and Jordan Hathaway.