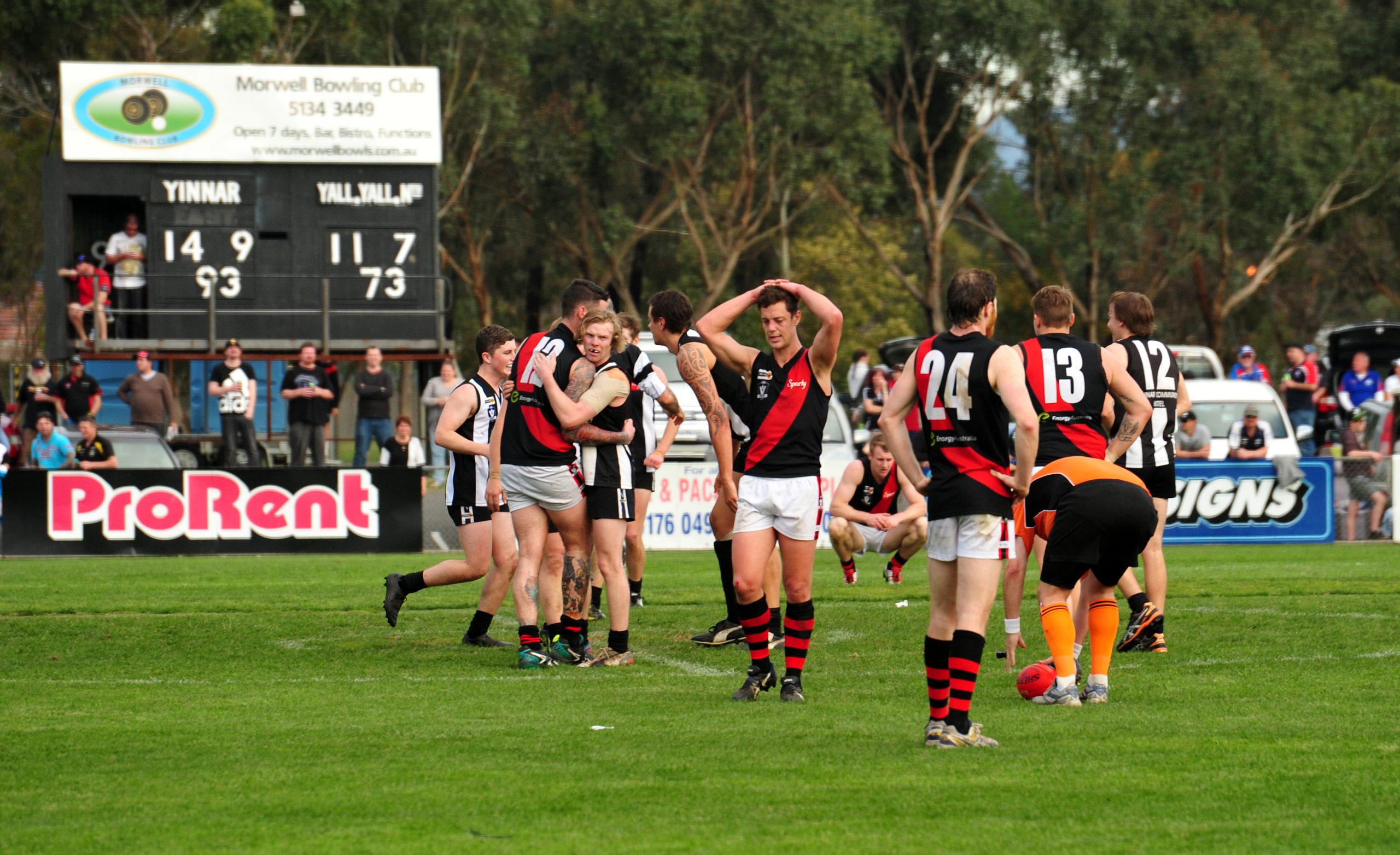 The feature match of round five will be the Mid Gippsland Football League grand final replay between Yinnar and Yallourn-Yallourn North.

YYN will have vivid memories of last year’s grand final loss to Yinnar after going through an historic season to finish on top of the table.

The 20-point loss was hard to take but it will be a mere footnote when the Bombers re-focus for this week’s clash.

Yinnar is currently unbeaten and will look to this match as a yardstick for the rest of the season.

YYN showed patches of inaccuracy against Newborough last week which caused a few problems but with a bevy of class forwards the potential is there to kick a winning score.

Yinnar has the meanest defence in the competition, so far allowing the opposition only 45.25 points per match, while the Bombers are giving away 56.75.

It’s going to be a big test for Yinnar to keep the busy Bomber forwards at bay but YYN will have the same problem against a persistent Yinnar attack.

They might lack the height of YYN but the Magpies have some nippy players to cover ground play.

Yinnar is unbeaten in the past nine encounters against YYN, which included a thrilling draw last season, and should continue the trend.

A big test awaits the Panthers as they play this week’s ‘home’ game on enemy territory at Thorpdale.

Two wins by both teams to date point toward this matchup being an even contest.

Yarragon is starting to get back players and is looking to established seniors to form the basis of a competitive side.

The Blues have been slow to start, letting the opposition get the first jump then fighting back, twice with success.

Both teams miss the full-forwards of last season – Troy Lehman (Yarragon) and Ilan Osman (Thorpdale) – who have both moved on.

The key is the forward line strategies as both have reasonable defenders.

Yarragon should pick up the points, but it won’t be easy.

NEWBOROUGH has a long injury list but will still have enough to give Boolarra a jolt.

The Dees are one and four at this stage and were expected to be more competitive but they too have been hit with injuries, a common theme across the board at this early stage of the season.

Newborough is playing well under pressure and likes to get ahead early and let the opposition give chase.

Boolarra may have a lot of chasing to do if current form is to be believed.

Thirds player Joel Mitchell has been to the fore of Newborough’s attacking zone with the youngster already kicking 11 goals from three matches.

Newborough is currently in fourth (on percentage) and booted YYN out of the four last week.

The side will still be looking to boost percentage and score more than their average of 79.75 points.

On stats it looks like a 20-point plus win for Newborough with Boolarra hovering just shy of 60 points per game.

TRAFALGAR finds itself in the unusual position of bottom of the table without a win after four matches.

It’s been a long time since this has occurred.

It has been a struggle for the Bloods so far, firstly to replace the players who have gone elsewhere and secondly to play competitive football with the talent they currently have.

History has Trafalgar winning the last 11 matches over Morwell East since 2011 but on form the Hawks should break their run of defeats.

The East have started to produce and will be keyed up to continue the streak and stay in the top three.

Mirboo North takes the long trek to Willow Grove knowing that another win gets it another step closer to the top rung.

The Tigers are three and one and are looking to this match to consolidate.

The loss of coach Clancy Bennett (hamstring) is a big on-field blow but they have plenty to fill the gap.

The forwards have been alive at the den with an average of 20 goals per match, which makes them the highest scoring team so far.

Kris Berchtold, one of the oldest Tigers’ players, is still a wizard in the big matches and some of his seven majors last week were gems.

Hill End has potential with some solid stock but lacks a decent full-forward who can give them hope.

Mirboo North should win to take its tally to eight straight over the Hillmen.