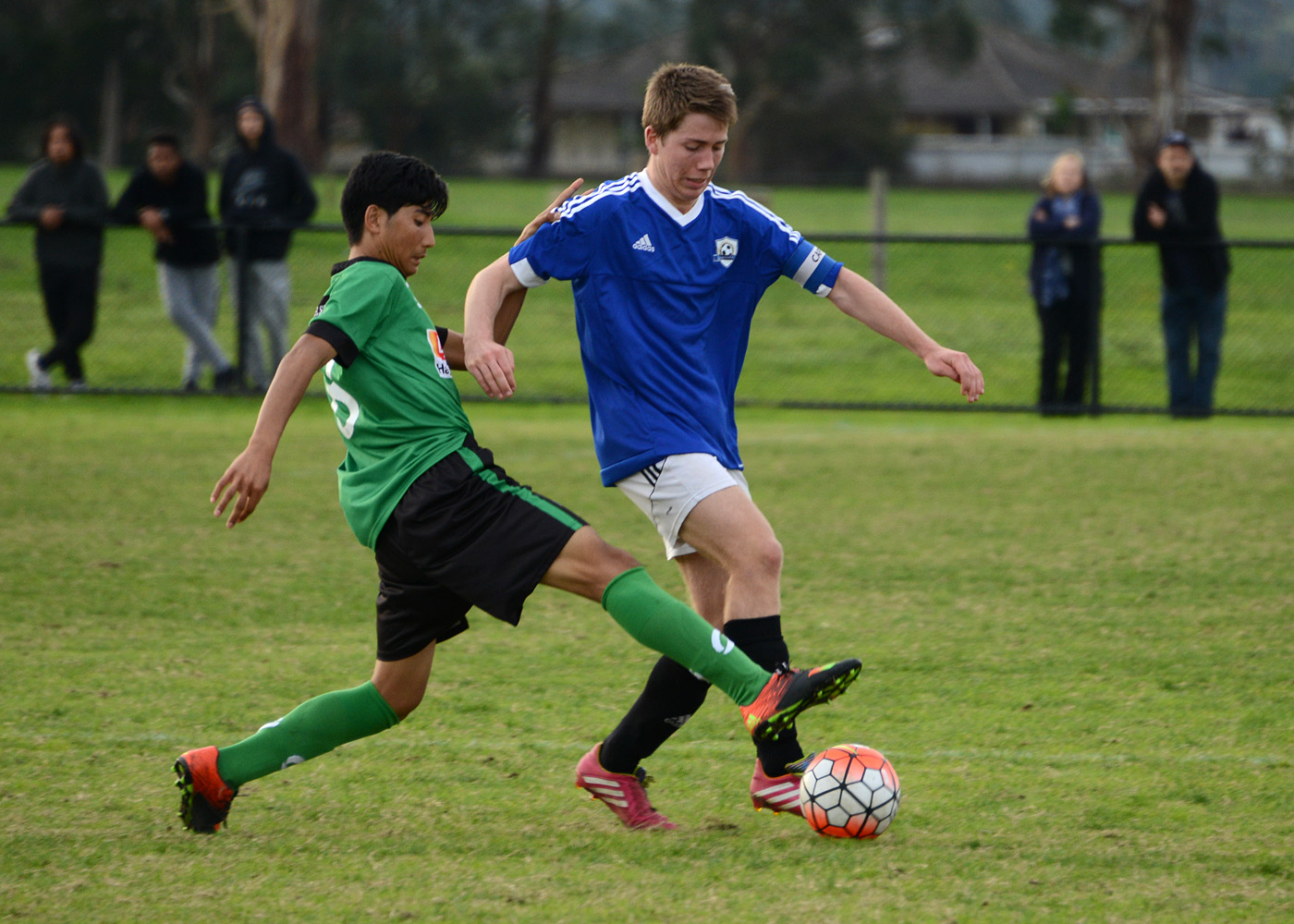 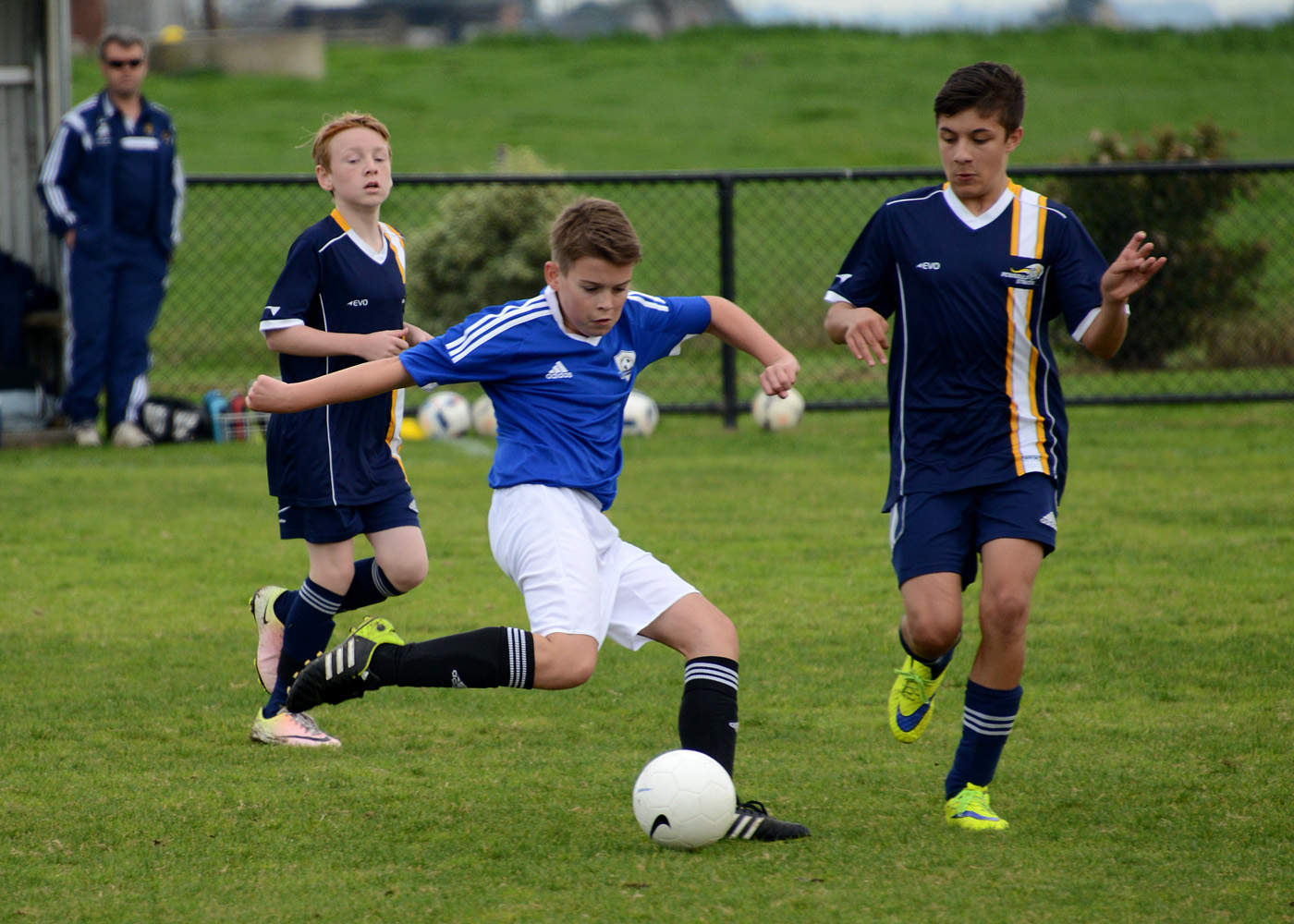 GIPPSLAND Football Club’s under 14 side consolidated its recent run of form with a thundering 7-0 demolition of Sandringham in a standout display at the weekend.

The club’s under 13 boys showed character in a four-goal draw with Peninsula Strikers, the under 15s fell short against Endeavour Heights and the under 18s were valiant but came off second best against the league leader Doveton SC.

ONCE again the youngest GFC team started slowly and looked a touch flat against a dynamic opponent, Peninsula Strikers.

Consequently, it was punished early by a great strike.

Gippsland responded magnificently when a fine Manny Scarlett-run and shot was poked in on the rebound by Kishen Parekh.

GFC snatched the lead after half-time when Julian Colantuono finished off confidently after a good initial save from the keeper.

The Strikers equalised from another strong strike and Antony Katiforis then defended defiantly to prevent the visitors taking the lead.

The host showed great character to recover from being behind and a 2-2 draw was a fair reflection of the game.

Manny stood out in the first half in an even team effort.

GFC’s under 14 boys are the form team at the club and enjoyed a resounding 7-0 victory against a gallant Sandringham FC outfit.

Gippsland was switched on from the first whistle and was rewarded with an early Daniel Gatpan header.

From then on the boys controlled the game with further strikes from Adam Semple (2), Manny Lual, Connor Dastey (2) and Blake Zimora.

Measured lead up play, movement and possession allowed GFC to control the game for long periods of time.

Jesse Buhagiar played a fine game in defence and was backed up by the power of Dastey and Zimora, while Semple controlled the front line well.

AftEr impressing in recent weeks the under 15s fell short of previous heights in a 1-2 loss to Endeavour United FC.

The team conceded two early goals after failing to clear defensive lines and was never in the hunt after that.

Despite controlling much of the second half, Gippsland lacked penetration and was a step off the pace.

A late goal to Zeb McLeod did not hide a disappointing loss.

Isaac Boulton and Callum Slade were the top performers for the home team.

AN outstanding performance was not matched by the result for Gippsland FC’s under 18s, which went down 1-3 to top of the table Doveton SC.

Doveton opened the scoring after some hesitant defending by the hosts.

An even affair unfolded with few scoring chances, before Nelson Tombra hit a fine strike to bring scores level.

Again indecisive defending was the cause of goal for Doveton’s second, with John Beamer left exposed in goals.

GFC then hit the post and went into the break 1-2 down despite having the better of general play.

The home team kept the league leaders penned in their own half for the first 15 minutes of the second half, but was caught on the end of a sucker punch goal by some quick counter attack by the visitors.

Gippsland continued to dominate but wasted some juicy free kick opportunities around the edge of the box.

Tombra continued to torment the visitor’s defence and forced a fine save from their keeper.

The club is split home and away this week.

The under 13s and 18s are away to Endeavour United SC and the under 14s play against Berwick City SC in Trafalgar from 12.15pm, followed by the under 15s playing the same opponent from 1.30pm.

The Gippsland under 15 squad is seeking interested players to top up squad numbers.