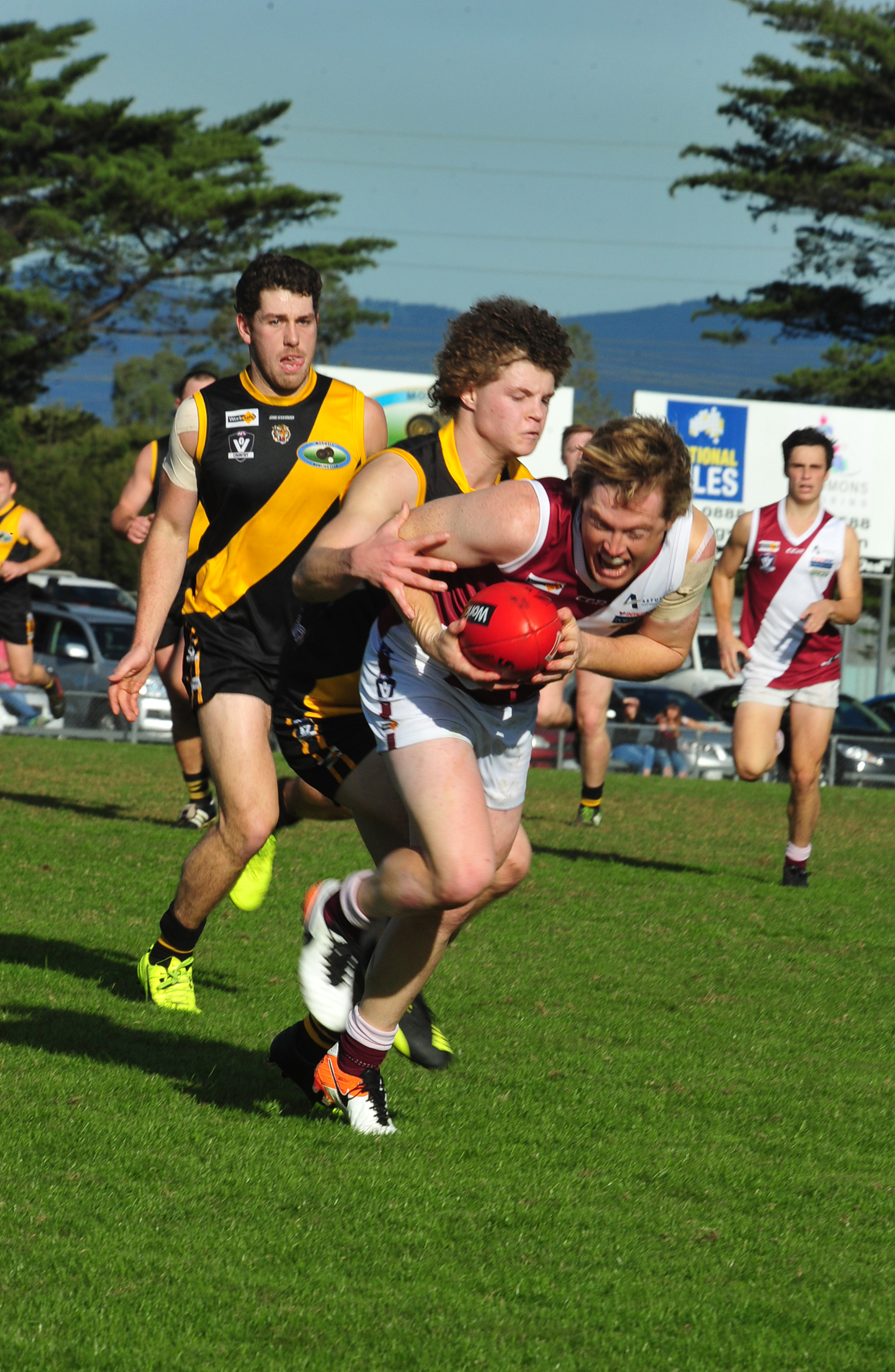 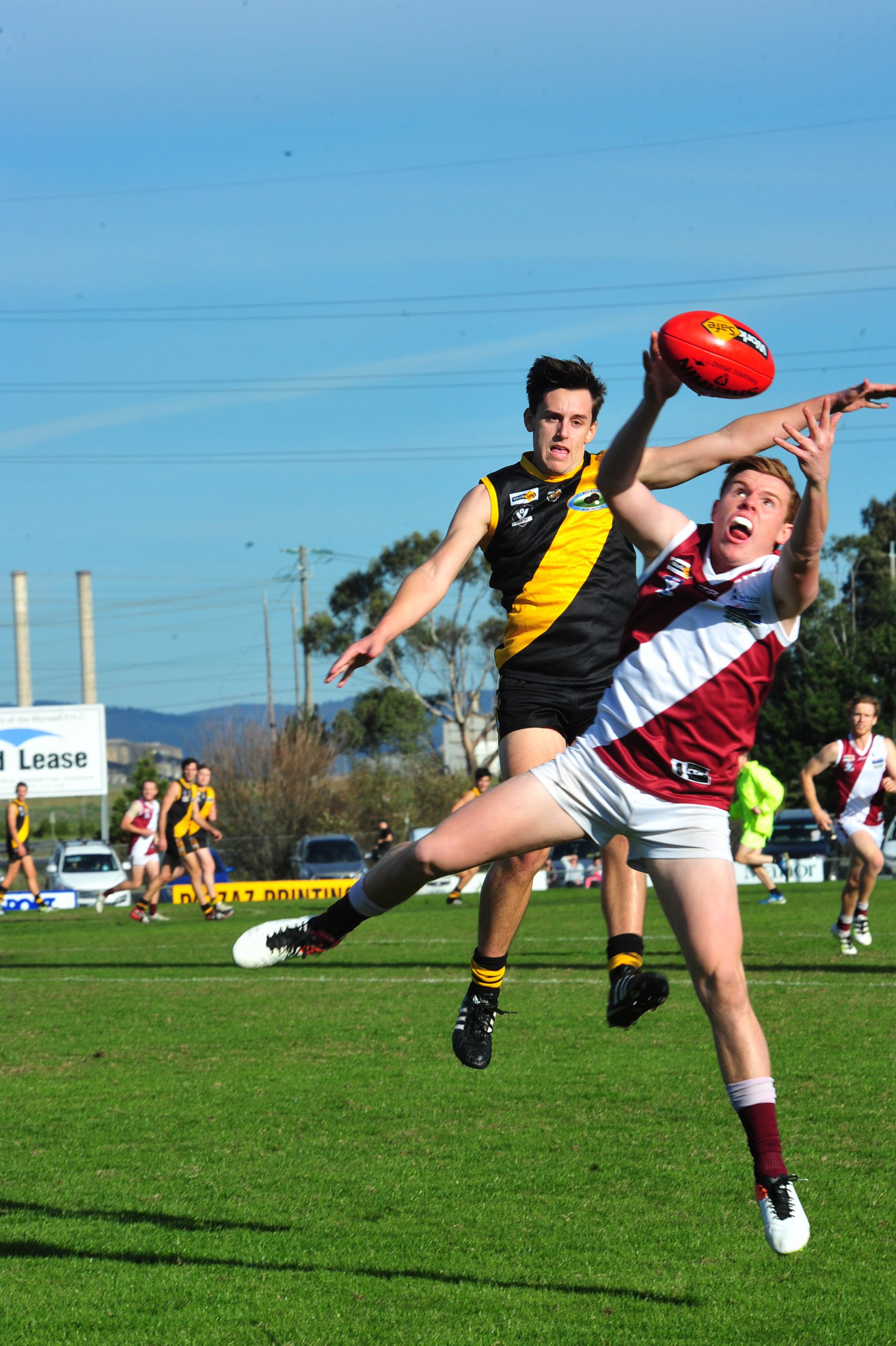 Entering round nine in last place on the Gippsland League ladder, few gave Morwell a chance of toppling reigning premier Traralgon, but coach Joel Soutar said the ingredients for success had been coming to the boil ahead of the drawcard match.

“It was definitely a big result. I think we’ve been playing some reasonable footy the last few weeks, other than the Leongatha game – (but) they’re a bit above everyone else,” Soutar said.

“It was a big win for us, we rate Traralgon highly, they’re definitely a top three side.

“Every time you get Morwell versus Traralgon it doesn’t matter where each team is on the ladder it’s a pretty close contest.

“Good to get the wins for the young guys and hopefully we can sort of build from that in the second half of the year, get some wins on the board.”

Morwell’s plan to win the contests through the centre and limit Traralgon’s outside run was evident from the opening bounce.

The Tigers were relentless at the stoppages and won most of the contested issues through the early stages and forced the opening two scores of the game with behinds.

Riley Hogarth was holding Traralgon forward Lee Stockdale at bay in their duel, but the Maroons managed the first major when Cory Stockdale thumped a set shot through from the top of the 50 metre arc.

After a rushed behind at the other end, Matt Northe had a chance to kick Traralgon’s second after a diving mark 50m out, but Rohan Hildebrand was penalised off the ball to hand possession back to Morwell.

It proved a rare chance for the Maroons as Morwell defended stoutly, with Gippsland Power’s Changkuoth Jiath, who was joined by fellow TAC Cup player Ryan Hearn in Morwell’s line-up, taking some strong overhead marks in the defensive third to repel advances.

Another determined win from the centre bounce pushed Morwell forward for its second major in as many minutes through Max Linton, who grubbered home from a tight angle under pressure.

Stockdale’s diving grab in the right pocket resulted in his second behind for the Maroons minutes later.

Traralgon stacked the packs from the resultant kick out to steal possession via coach Mark Collison, who danced around one and found Rohan Hildebrand who played on to kick a running goal.

Jiath’s brother, Kuiy, then took a mark right in front to kick Morwell’s third, before Stockdale crumbed off the pack to reply with Traralgon’s third.

By the end of the first Morwell led by two points and the back and forth continued all afternoon.

Traralgon edged back in front by three at half-time and Morwell was up by four at three-quarter-time.

Back-to-back majors to Tatterson gave Morwell an eight-point buffer late in the piece which proved just too much for Traralgon to drag back by the final siren.

“We knew we had to put the pressure on them because we know how good they are with their ball use… if you let Traralgon run on the outside they’ll kill you,” he said.

“We’ve got a good mix through the middle. We had a big focus on winning the ball around the centre and in close (because) we got smashed the week before by Leongatha. We know how good Traralgon are on the outside… so we had to stop their spread.

“I think we went about it the right way. The boys really cracked in inside and gave our runners some good options on the outside.

“Ryan Tatterson was really good for us, he’s one of our leaders and stood up in the last quarter, so to kick those goals when we needed them was huge.”

Morwell and Traralgon will rest this weekend before finishing off a split round 10 against Leongatha and Wonthaggi, respectively.

Soutar said backing up the big win would be important.

“That’s the challenge for the group now; we’ve beaten a good side up top, we need to challenge the sides around us and beat them,” he said.

It was a less successful occasion for Morwell’s netballers as Traralgon took a clean sweep across the grades.

In this weekend’s round 10 GL football matches Drouin faces Bairnsdale, Moe tackles Warragul and Maffra has Sale in the ‘Battle of the Birds’.