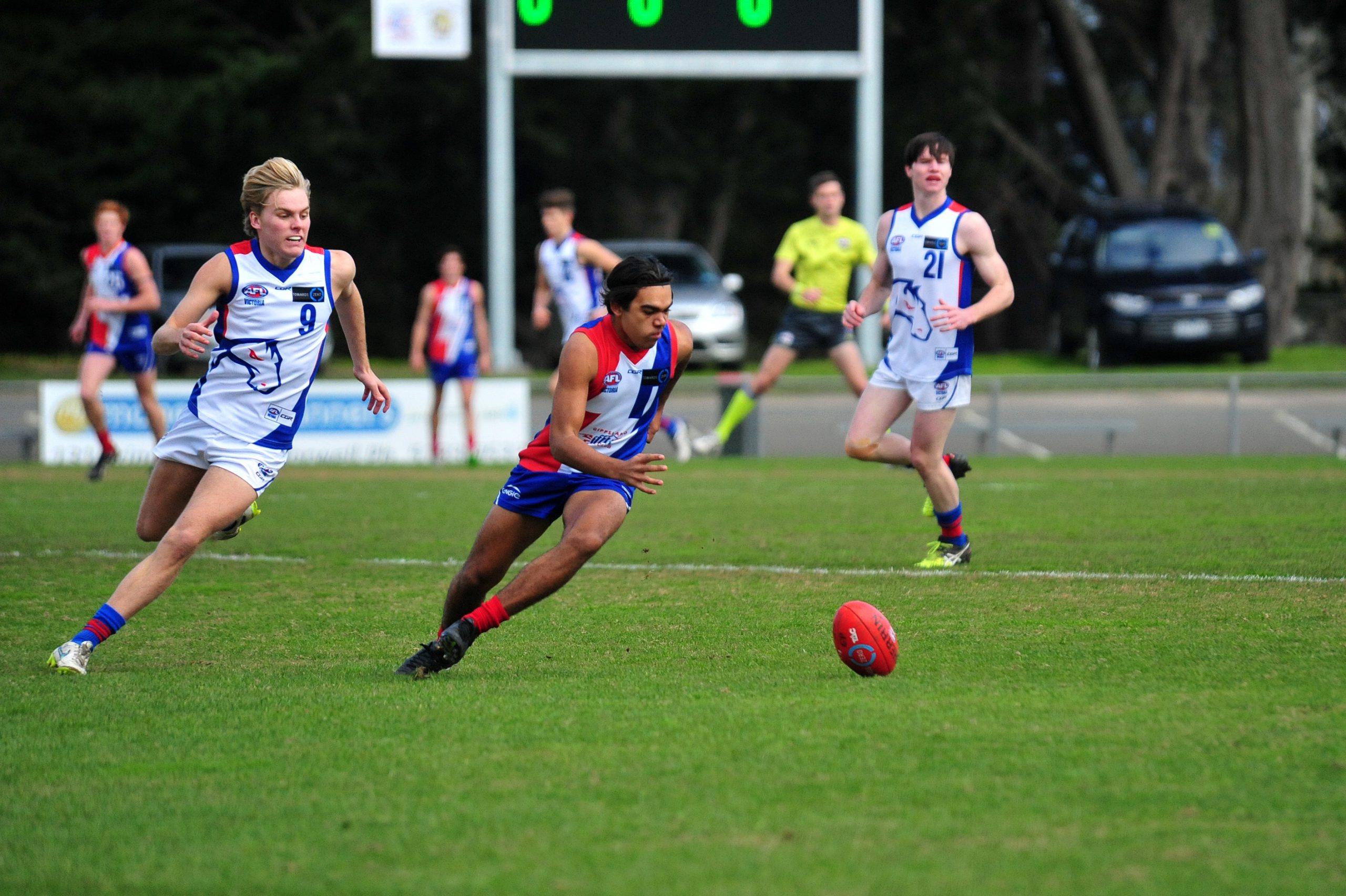 Gippsland Power was valiant in defeat against the much-improved Oakleigh Chargers on Saturday.

The return of Tyrone Hayes and CJ Jiath from school football commitments added to Gippsland’s depth and competitiveness, however it was not enough as the Chargers recorded a 15.9 (99) to 9.10 (64) victory.

The Chargers opened their account with two quick goals after capitalising on minor Power defensive errors.

It took some class by Callan McKeon and Jiath to find Jai Rout who finished it off accurately.

The Power defence was under regular pressure but stood firm for much of the first quarter.

The Chargers broke through just before the siren to snatch a goal and enter the first change 14 points ahead.

Statistics for the quarter illustrated the problems the Power faced as they had to apply 40 tackles when the Chargers had twice the number of forward 50 entries.

Early in the second term the Chargers maintained the pressure and took full advantage of some errors by the Power.

It took some fine skills by Will Leslie to get the ball to Hayes who demonstrated his talent to kick a goal for the Power.

Instead of building on this, the Power were again punished and found themselves on the back foot.

Jimmy Harrison used the ball with elite poise and skill to allow Josh Patullo to kick a crucial goal.

At half-time the Chargers were ahead by 16 points.

In the early minutes of the third quarter, Leslie used the hard won ball to link up with Rout and this time Austin Hodge finished off the job.

Once again the Chargers hit back and it was Leslie who stepped up once more to put the ball deep into attack where Tate Marsh used his pace to reduce the Chargers’ margin to single figures.

Instead of adding to this all-important scoreboard pressure, the Power again wasted possibilities to kick vital goals and were punished even further when the Chargers exploited some soft defence.

At three-quarter-time the margin was still 16 points and indicated how well the Power had used pressure to minimise the Chargers’ scoring opportunities and create their own.

It took just a few minutes of the last term for the Chargers to put the issue beyond doubt as they kicked three easy goals.

After taking a fine contested mark, Hodge found Rout who took advantage to score a major.

Yet again the Chargers went into overdrive to kick another goal and things  looked problematic for the Power.

Some determined contested football by the Power enabled Trent Armour to allow Marsh to kick his second and then another fine intercept mark by Corey Timms resulted in the ball going direct into attack.

A strong contested mark by Nathan Voss was converted truly and then the Chargers responded with another major.

It was again looking like the Power were in deep trouble but excellent pressure by Leslie set up Patullo for his second.

In the latter part of the quarter the Chargers kicked two more goals and extended the final margin to what appeared to be an easy 35 point victory.

Closer analysis of the situation showed the Power did not deserve to be that far behind at the end of the match.

Captain Ben Ainsworth will return to the line-up after another great performance at the national championships.

CJ Jiath and Tyrone Hayes will also be available.

Victoria Country lost its fourth and final round match of the AFL Under 18 Championships played at Etihad Stadium on Wednesday, 29 June.

Last year’s champions, the Country side was winless in this year’s carnival.

Victoria Metro won the championships for the ninth time since 2000.

In that period Victoria Country have won four titles and Western Australian and South Australia have won two each.west. Aust.