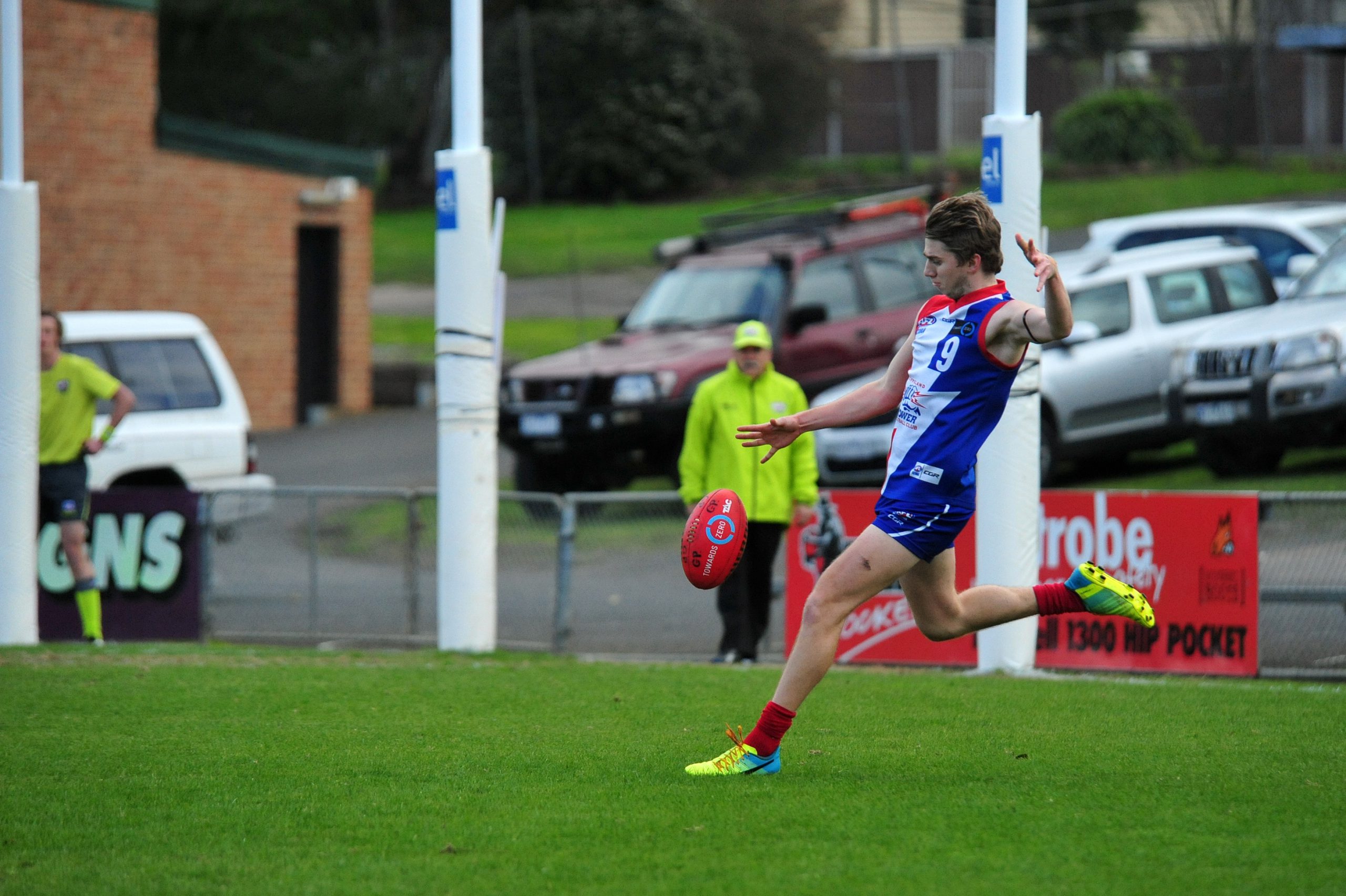 Gippsland Power has continued its winning ways with a 23-point victory against Calder Cannons.

Taking plenty of confidence from last weekend’s triumph against ladder leaders Geelong Falcons, Power defeated its second ‘football factory’ in succession, knocking off the Cannons on their home deck, 14.16 (100) to 11.11 (77).

A cold wind howled down the ground, providing a strong advantage to one end.

The wind was so strong that players kicking the ball high into the wind found it returning to them like a boomerang.

Power kicked with the wind in the first quarter and established a lead.

Will Stephenson was involved in everything early; if he was not kicking goals he was setting up his teammates.

For all of their hard work though Power led by just 15 points at the first break.

Lapses in concentration and turnovers proved costly in the second term, with Calder using the wind advantage to pile on five goals.

When Stephenson kicked his second against the run of play it sparked the team into action and although it was not reflected on the scoreboard, Power finished off the half strongly.

Jai Rout was rewarded for his forward pressure, winning a free kick 40 metres out from goal right on the half-time siren, however his shot was touched on the line.

Power went into the half time break trailing by 13 points.

Coach Leigh Brown implored his young players to kick long down the middle of the ground to maximise the wind advantage and for the midfielders to increase their defensive efforts and be more accountable.

Brown was pleased with his team in the third term, as they did just what he asked.

They dominated centre clearances and used the ball well with an eight-goal-to-one quarter to set up the victory.

Nathan Voss was lively up forward, booting three goals in 10 minutes, and Josh Patullo let one go from the centre square that sailed over the goal umpire’s head. Patullo dominated both in the air and around the ground, following up his ruck work with clearances and pressure efforts.

As the 23rd man, under 16s player Xavier Duursma kicked his first TAC Cup goal, and when Ben Ainsworth showed his elite skills with an interception and goal, it gave Power a 38-point lead going into the final term.

In any other circumstance, such a lead would be a comfortable position, but since the Cannons were kicking with the wind in the last quarter, the pressure was on Power’s defenders to nullify the advantage and hang on to the lead.

Power controlled the ball early in the last quarter and when Trent Armour kicked a goal from a set shot it seemingly broke the Cannons’ spirits.

“Our effort was really good all game, but the difference was how we used the ball in the second half,” Brown said.

“We were much smarter. We really have come a long way from when we played Calder earlier in the season. The confidence of the group is really growing.”

In that round five match, the Cannons defeated Power by 52 points.

The TAC Cup competition takes a break for a development weekend, but there will be plenty of Power player’s in action elsewhere.

A number of bottom age players have been selected by the Victoria Country Academy to play in a ‘Futures’ match with an eye to next year’s under 18 National Championship.

Ainsworth will also be running out for VFL affiliate Casey Scorpions as the 23rd man when they take on Essendon, where he could be matched up against former Power player Nash Holmes in the midfield.

Powers’ next game is against Eastern Ranges on Saturday, 13 August at Morwell Recreation Reserve.