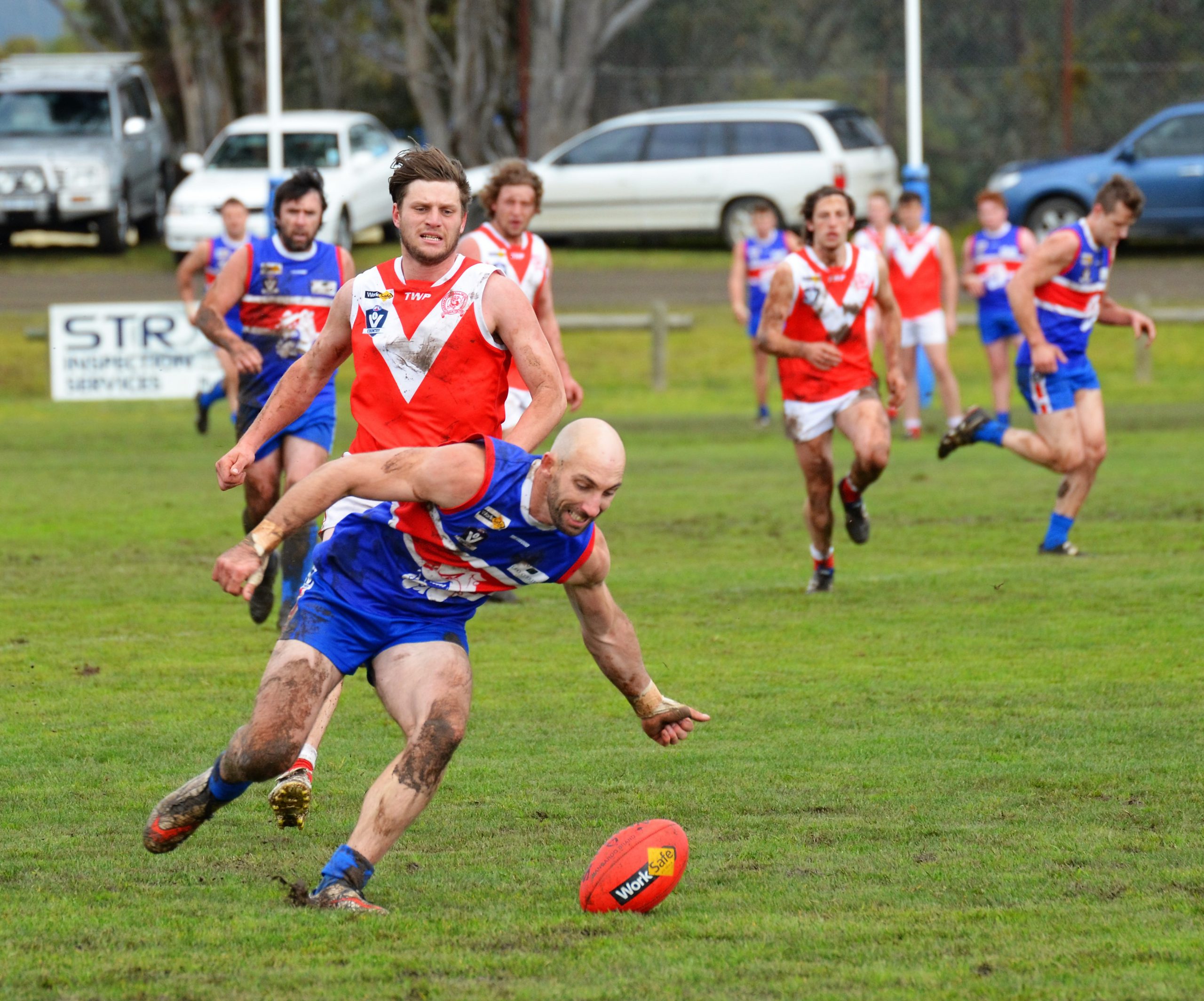 The Bulldogs led Yarram by 53 points at half-time of Saturday’s preliminary final at Rosedale, but could only manage one goal the second half as the Demons stormed back into contention.

After being part of the Bulldogs team knocked out of last year’s finals series in straight sets, Sale City coach David Piasente was relieved to avoid the same fate again this year.

“I wasn’t thinking about it until the last two minutes when I thought ‘gee it looks like we might hang on here’,” said.

“This time last year we were up against Churchill by 40 points and they came back and beat us so it’s a good sign that we hung on.

“Credit to the players, credit to Yarram for not giving up the fight and we get to play in a grand final, which everyone is excited about.”

The likes of Brad McKay, Josh Tollner, Jacob Schuback and Justin McLay dictated play and controlled the tempo as City broke the game open after quarter-time.

A 21-point lead quickly ballooned to 53 on the back of goals to Tom Wilson (two), Jake Milham, Bohdi Walker and Tollner.

All that changed at the main break, as the Demons finally got their run going.

Michael Pettitt got on top in the ruck and Yarram got busy at the stoppages.

The Demons continued to surge, with early goals to Louis Rodaughan and Sutherland closing the gap, but time and energy against them.

An inspired piece of ingenuity from Tyler Chisholm to snap a loose ball out of mid-air through for a goal dragged the Demons back within eight points at the 20-minute mark of the final term.

However, that was as close as they got and City held on to win by 10 points.

was pleased to make it but said there was plenty to work on ahead of the grand final.

“It felt like we were in control of the game but to Yarram’s credit they kept coming with their hardness and their work around stoppages,” said.

“I don’t think it was , we just weren’t getting our hands on the ball and in the first we were playing instinctive footy, giving that first option and kicking it long.

“There’s a lot of things we need to work on as a group if we want to win next week (but) we said at the start of the year we wanted to have the thirds, reserves and seniors all there and that’s happened so well done to the club.”

Jack Sellen was given a tagging with on prolific Yarram ball-winner Griffin Underwood and his efforts were key to the victory.

Starved of time, Underwood was unable to generate the run and carry off half-back that Yarram has used to such devastating effect this season and precious few of his disposals were forward of centre.

But perhaps Sellen’s most significant contribution was in the final quarter.

Underwood pushed deep forward and isolated Sellen one-on-one, but despite being outsized, the young Bulldog kept his feet, brought the ball to and laid a strong tackle to deny a goal scoring opportunity.

McLay and fellow backmen Mitch Evans and Barry Parsons were also among the Bulldogs’ best.

Demons midfielder Chris Bruns found plenty of the ball all day, while ability to spread from stoppages and break the lines was key to generating the run Yarram needed in the second half.

Yarram coach Chris Pettitt was proud of his side for the second half comeback but rued giving the Bulldogs such a head start.

“It was one that when we reflect on we’ll probably be happy with but not so much now,” Pettitt said.

“It was good to fight back and show a bit of ticker but it was just such a disappointing first half.

“We just changed plans… we had to go long and strong and had nothing to lose in the second half which changes the game a lot when you’ve got nothing to lose.

“I think we showed in the second half we’re good enough to do it and we thought we could beat them for sure so we weren’t here just to make up the numbers.”

Sale City now has a week to prepare for what is certain to be a physical grand final battle with Heyfield.

In the reserves, Cowwarr shaded a low-scoring preliminary final with Heyfield 3.8 (26) to 3.3 (21) to stun the minor premiership-winning Kangaroos and move into the grand final against Sale City.

Sale City will also contest the thirds grand final, after defeating Glengarry 9.12 (66) to 7.7 (49) and will meet Yarram in next week’s decider.