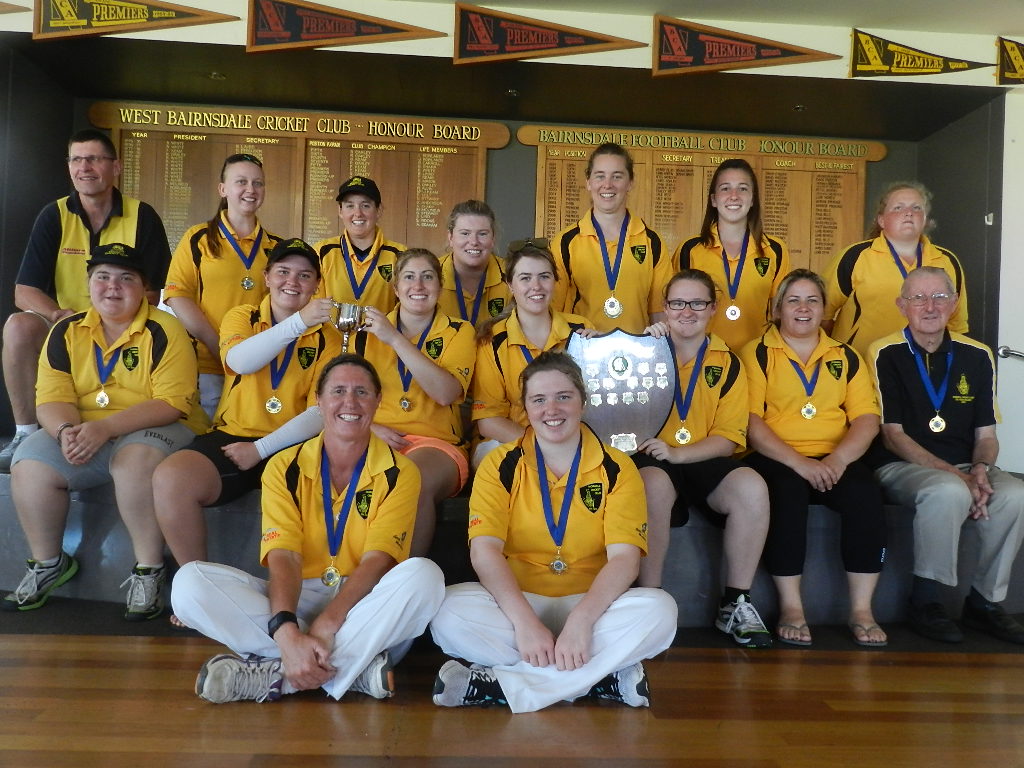 It was the fifth straight flag for a side that’s made it to the big game 14 times in a row and won 10 of them.

Played at Pepper Corn Park in Bairnsdale on the weekend, the Tigers were convincing seven-wicket winners over rivals Bairnsdale.

Morwell captain Robin Fitzpatrick won the toss and sent the home side into bat.

The move paid off immediately when She picked up a wicket with her third ball of the day.

A minor recovery saw the challengers reach 1 for 17, but the introduction of Lisa Bowring to the bowling attack in the tenth over saw the game take a turn.

A sharp catch at mid-off to Ryley Reid and then a nimble caught and bowled had the East Gippsland side reeling at 3 for 17, with Bowring snaring two for two in her first over.

The home side’s batting mainstays in Paula O’Neill and Bec Stevens were now at the wicket and intent on digging in.

Fitzpatrick came back into the attack and looked to Lynda Walker and Bowring to break the all important partnership.

At three for 49 off 20 overs the batting side had got back on an even keel, but disaster struck when Walker got the breakthrough of O’Neill leg before wicket after her patient 20.

The visitors were back on top with a score line reading 4 for 49.

Only eight balls later the key wicket of Stevens (17) was secured, when Casey Sherriff enticed her opponent to take a big swing and in an amazing act of athleticism, Walker, fielding at deep square leg, leapt in the air and clutched a one handed catch just centimetres inside the boundary line.

Bairnsdale was now 5 for 50 in the 22nd over and the top order had all been dismissed.

Ryley Reid joined the bowling attack and in her first over picked up the wicket of Chloe Mackenzie, well caught by Taylah Kilpatrick, to further restrict the batting side.

Once Moon (15) was dismissed by the Simone Clymo and Walker combination, the home side disintegrated and lost its last three wickets with the score on 84.

Kilpatrick, with her medium pace ‘dibblers’ cleaned up the tail to finish with two for three.

In the quest for the Martha Claridge Shield, Morwell went with the experienced batting combination of Robin Fitzpatrick and Megan Parker to set up the run chase.

Through a combination of powerful leg-side hitting and resolute defence Morwell raced to forty off 10 overs and the flag was within sight.

A slight hiccup came with the dismissal of Fitzpatrick (28), followed by Clymo not long after, but Parker and Bowring shored things up with a twenty two run partnership.

At 67 and in the twenty first over, a patient Parker (18) finally was dismissed, but walked off the oval knowing she had ensured her side’s handful of cups was within reach.

Experienced Ash Bone (13 not out) joined Bowring (9 not out) and took less than five overs to reach the all important target of 84.

With victory achieved in the twenty sixth over Morwell had ensured the road trip home was going to be a good one.