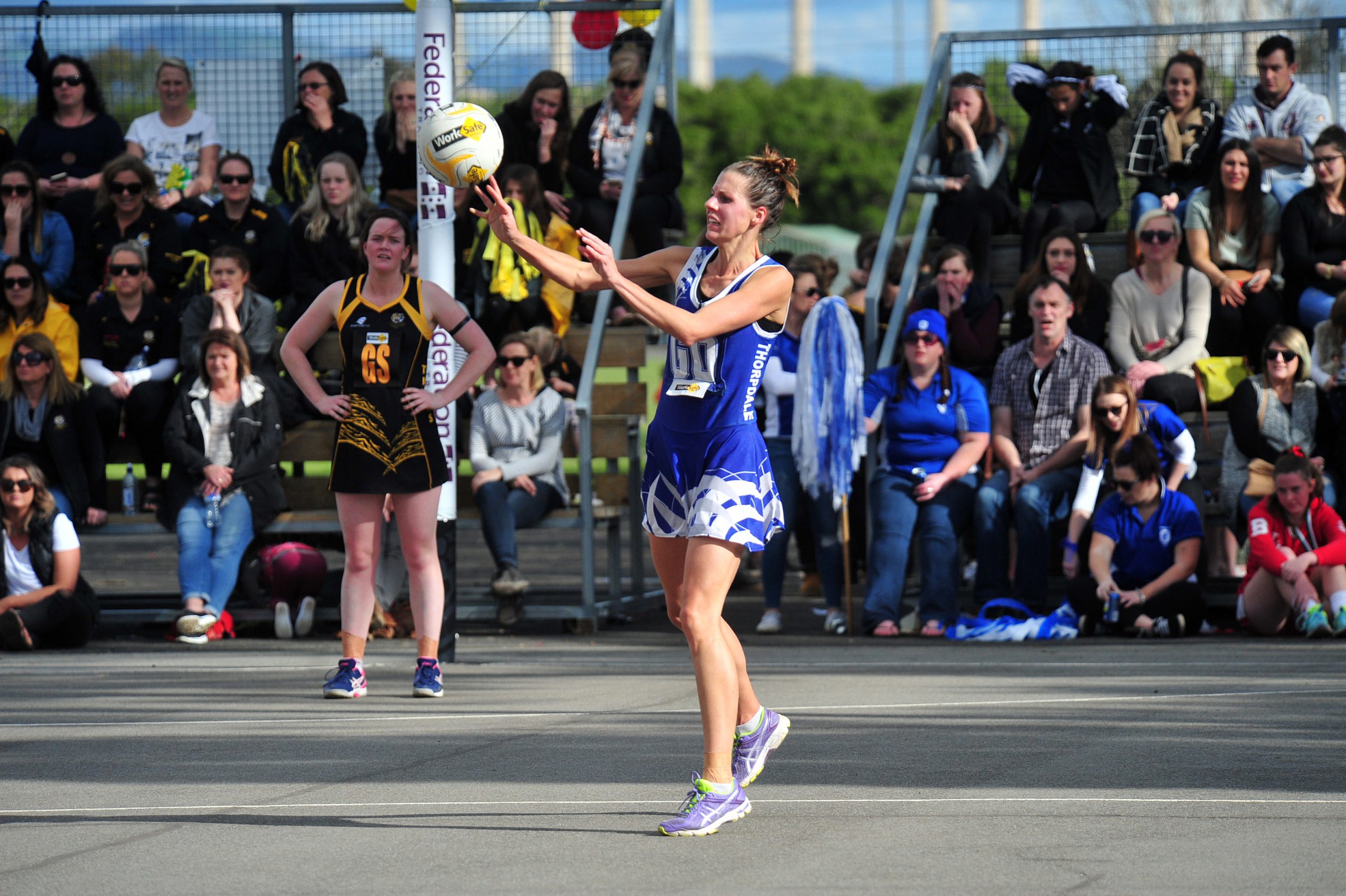 The 2016 grand final rematch between Mirboo North and Thorpdale was closer than the big one last year, albeit with the same result.

This time Thorpdale got the job done by a seven goal margin. Five-and-a-half months ago the Blues won by 13.

It was not the same game though; both sides had new players and there was a distinctly different feel to the game.

A lot of yo-yo netball was on display with high volumes of movement but low scores.

Thorpdale led most of the game but found itself up by just one goal at the final break after the Tigers changed their shooting setup at half-time for a decent return.

Ultimately the Blues withstood the challenge stepping up their intensity and tightening up the defence.

Mirboo North’s change worked out for a period, at least, but Thorpdale went back to its well proven basics and was patient with its opportunities, allowing for better feeds closer to the post making it easier for the shooters.

Clair Hammond filled-in up front for the reigning champs and had a stellar last quarter especially, hardly missing the hoop.

The visiting Yallourn Yallourn North came out hard in the first period, only to come up against a mentally and physically tough Newborough side.

Calling on all their experience the Bulldogs were able to hold out during the first half and then ran over their opponents in the backend of the game.

Newborough goal defence Courtney Risol was an anchor at the back, forcing turn overs and providing movement up forward.

Despite the final score line it was a see-sawing affair at Dowton Park in Yarragon.

Still missing key players, including co-coach Bec Farrell who’s on new mother duties, Trafalgar got off to a shaky start.

Both teams tried to set the tone for the game, with neither truly finding ascendancy.

Then the Bloods put in a third-quarter of power, blowing the lead out to 23 going into the final break.

Tightening up on turnovers and shooting accuracy was key to Trafalgar’s effort.

Not done, the Panthers went on to outscore the visitors in the last period by one goal, but it was not enough to pull the gap back.

For the Bloods Billie-Jo Malady was solid over four quarters and had a clear game best effort while Ella McDonald and Megan Hancock lifted in the second half.

A long preseason paid off for the Hawks with a big win over Hill End.

The size of the victory took many by surprise.

Once Morwell East could sense the win the team started focusing on set plays, which were executed successfully.

The Hawks’ defensive play was key all game, forcing turnovers and driving the ball forward.

When the ball was in its attacking zone, Morwell East’s shooting was accurate and when it did not drop players were there to make rebounds.