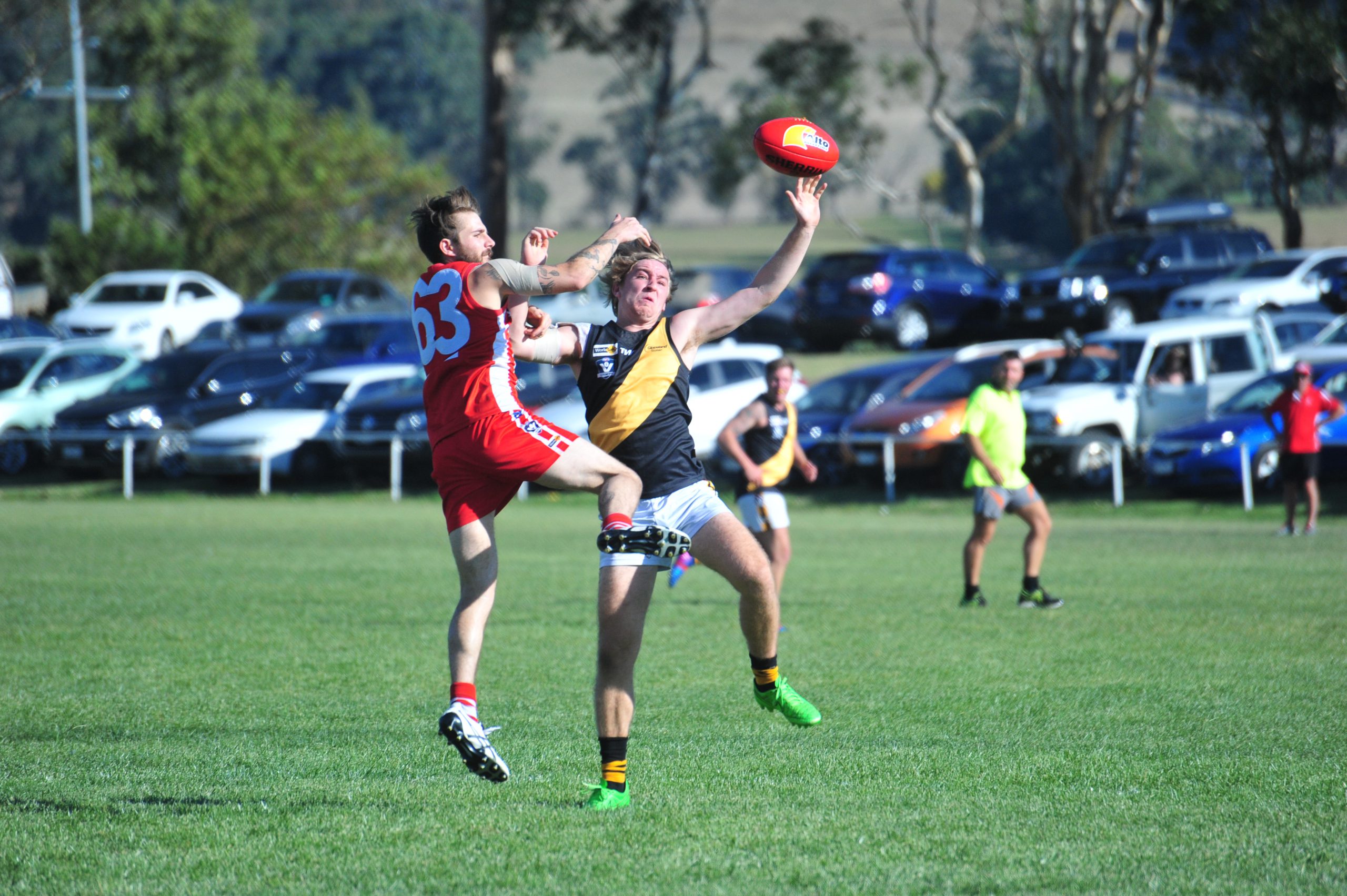 Mirboo North was the favourite against Trafalgar and started off well with the first goal of the game going to Luke Palmer in the opening minutes of Saturday’s Mid Gippsland match.

It looked like it might go the Tigers way at the start of each quarter but with some fantastic defensive work and great forward pressure, the Bloods secured a victory and came out on top 110 to 72.

“It was a bit of a poor start, but we weathered the storm early and things picked up in the midfield. Then everything seemed to click in for us after that,” he said.

“We still have fifteen players on our list from last year so the experience in the side certainly helps. They (players) are fitter, stronger and what everyone learns in training is what we try an implement during the game.”

There was a lot of contested football in the first quarter and although Mirboo North attacked frequently, Trafalgar kept up the forward pressure.

The stand out player for the Tigers was defender Jacob Nash.

Jamie Hines, Damian Mann and Matthew Van Schajik stood out for Trafalgar, going into the first break leading 27 to 14.

Having put themselves under pressure, the Mirboo North started out well again in the second.

The Bloods continued applying pressure and played a beautiful quarter, winning most of the stoppages.

Ridgway kicked a much-needed goal for the Tigers but Trafalgar was ahead at the long break by four goals, 55 to 26.

Jessie Giardina and Brayden Wilson for Mirboo North were denied an easy run at the footy and delivery just wasn’t coming to them.

Trafalgar’s Matthew Goodman started coming into the game and Hines was taking the ball, exploiting possession and moving it around.

With Mirboo North needing a big third period, they put Joshua Taylor into the middle.

The Tigers missed a kick at goal early in the match and Trafalgar responded by maintaining possession with pressure at the other end and adding a major from 50 metres out via young Van Schajik, making it his third.

The game was then really in the Bloods’ control with Lochlan Farrell kicking his second and Van Schajik getting a fourth.

Trafalgar won all three quarters easily, heading into the last break way up, 89 to 34.

The Tigers picked up the pace during the final quarter but it was pretty even goal-for-goal.

Van Schajik was all over the front line for Traf but missed two of his three chances while Farrell kicked his fourth.

The Tigers booted five in the last but it was all too late.

“Trafalgar worked harder and they looked a lot hungrier.

“When there were 50/50 balls to be won they were in better spots with better numbers and I don’t think we worked hard enough.

“They are working on that and I commend them for their effort but we need to work on it more.”

Trafalgar’s Van Schajik kicked five goals and Farrell four while the Tigers shared the duties with 10 players getting one major.

The Demons certainly took the game to the Panthers this week with a great start in the first quarter putting them in front by one goal.

By the third quarter it looked like the Panthers might come out on top, but the Demons had other ideas.

Scoring four goals to the Panthers one in the fourth quarter almost gave the Demons a well-deserved victory but in the end, it came down to just three points.

It was a struggle for the Hillmen against the Magpies and they were never really in it.

Yinnar dominated throughout the game, particularly in the second and third quarters.

Hill End struggled to find any kind of form in the first half, only managing to kick one goal from seven chances.

Michael Geary and Timothy Derby dominated the kicking for Yinnar scoring four each.

The Hawks were chasing the Bombers all day but never looked like catching them.

YYN were particularly dominant in the second half of the game taking a six goal lead by the end of the third quarter.

In a flash back to 2016 Morwell East had more opportunities at goal in the fourth quarter but weren’t able to convert.

There inaccuracy seemed to be rubbing off on the opposition as the Bombers had thirteen shots at goal but only one made it through the middle.

Morwell East look to have some work to do.

It was a hard fought match between the reigning the premiers and the Blues.

A tight first-half saw the teams going into the long break tied up on 21 points.

In the third the Blues surprised the Bulldogs with a six goal to three conversion rate to take the lead.

The final quarter was a reverse of the previous with Newborough piling on seven majors to close the gap.