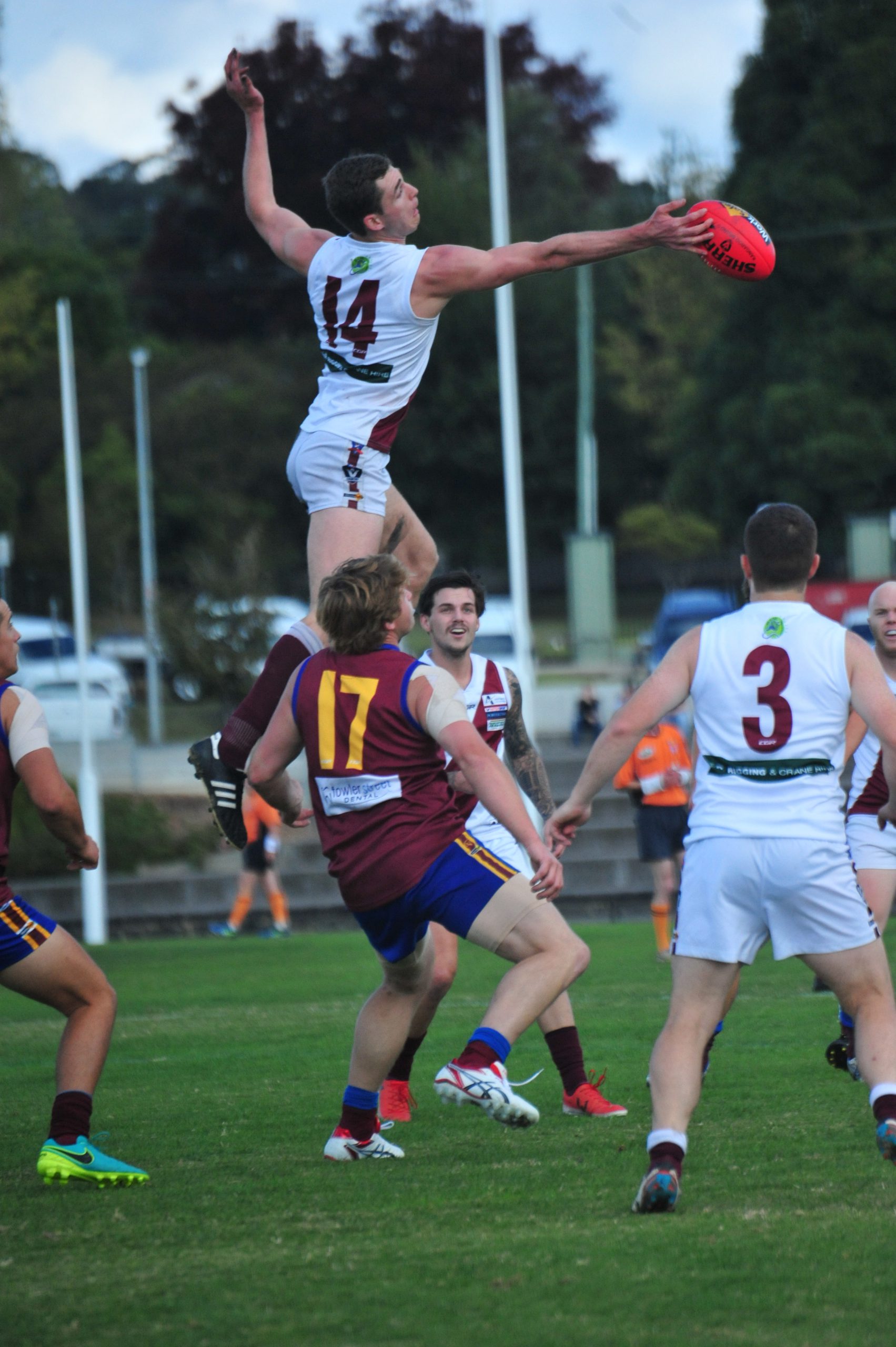 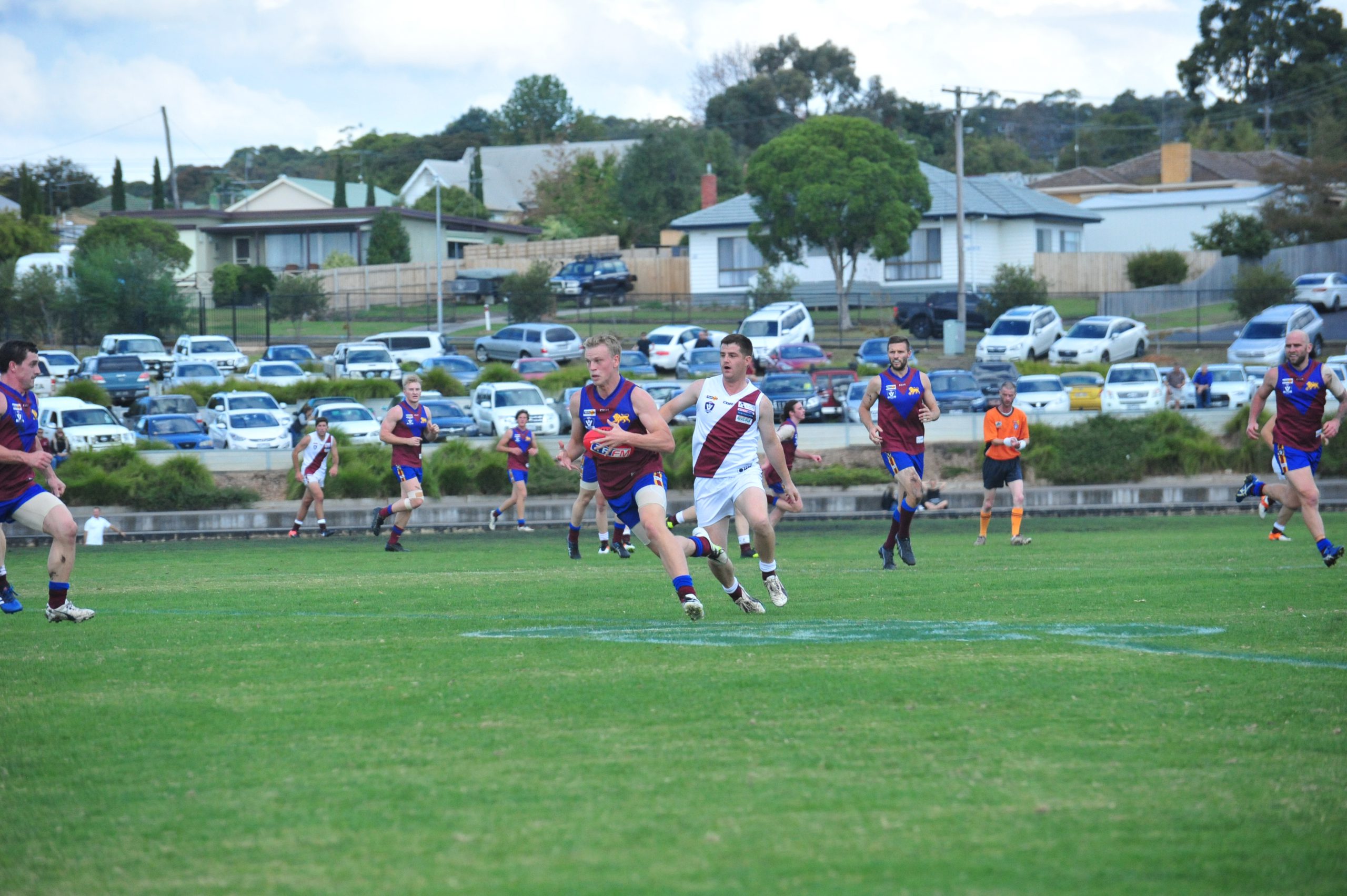 A thirteen-point lead at half time was not enough to carry the young Lions though against a determined Maroons outfit.

Maroons’ coach Mark Collison was not happy with his sides performance, despite the win.

“The first half we were too busy wanting to wrestle and fight and we weren’t switched on with what we wanted to do.”

With only 17 players on the field, Traralgon tightened up and started playing structured football.

“When we go down to 17 on the field it forces us to switch on and we played better,” Collison said.

“We got all of our structures and footy in place, and we really focused on the task at hand.

“It’s only round two but we just better make sure we come switched on or otherwise we’ll pay the price.”

Traralgon had an eight-point lead at quarter time, but the difference was flipped in favour of Moe by the long break.

Not content, the undermanned Maroons turned the tide in the third, going into the long break three points up.

Moe’s big ruck man Dylan Farrell went down early with an ankle injury and that hampered the Lions’ effectiveness around the contests.

The visitors then restricted the Lions to a goal in the final quarter while kicking four.

Moe coach James Blaser also felt his side could have done better.

“It was disappointing that we couldn’t quite hold on and they kicked a couple of goals in the final quarter,” Blaser said.

“The game for me was played with no real structure from either team, at times it felt like everyone was just all over the shop.”

Both teams were inaccurate with 15 behinds for Moe and 16 by Traralgon.

Lee Stockdale kicked three for the Maroons while Tim Northe had one major and got the nod for best on ground.

There’s only one way Drouin’s first-first half of football against Sale could have been worse – the young Hawks could have failed to score even one point in 50 minutes.

With the scores 77 points to one at the long break, it was not a clich to say the game was over.

However, to their credit Hawks did not let their heads drop and mounted a fight back of sorts matching the Dogs in the third and out scoring them in the fourth.

Michael Todd was best for Sale and kicked a goal while Drouin’s Jordan Kingi led the come back and booted four in the process.

After one shocker and another half shocker, the Hawks should fancy their chances hosting the Power next round who haven’t been much better.

Sale will host the rampaging Maroons.

Bairnsdale is still winless and was taken to the cleaners by Maffra.

Leading at every change, the Eagles not only piled on the offensive pressure, but held Bairnsdale back on scoring as well.

By half-time the lead was out to 25 points but the third was where all the damage was done as the Eagles kicked six more to seal it.

In the final 25 minutes the Redlegs had their best quarter of football but were still outscored.

Corey Timms was again among the best for Bairnsdale while Daniel Bedggood kicked three for the seemingly unstoppable champs.