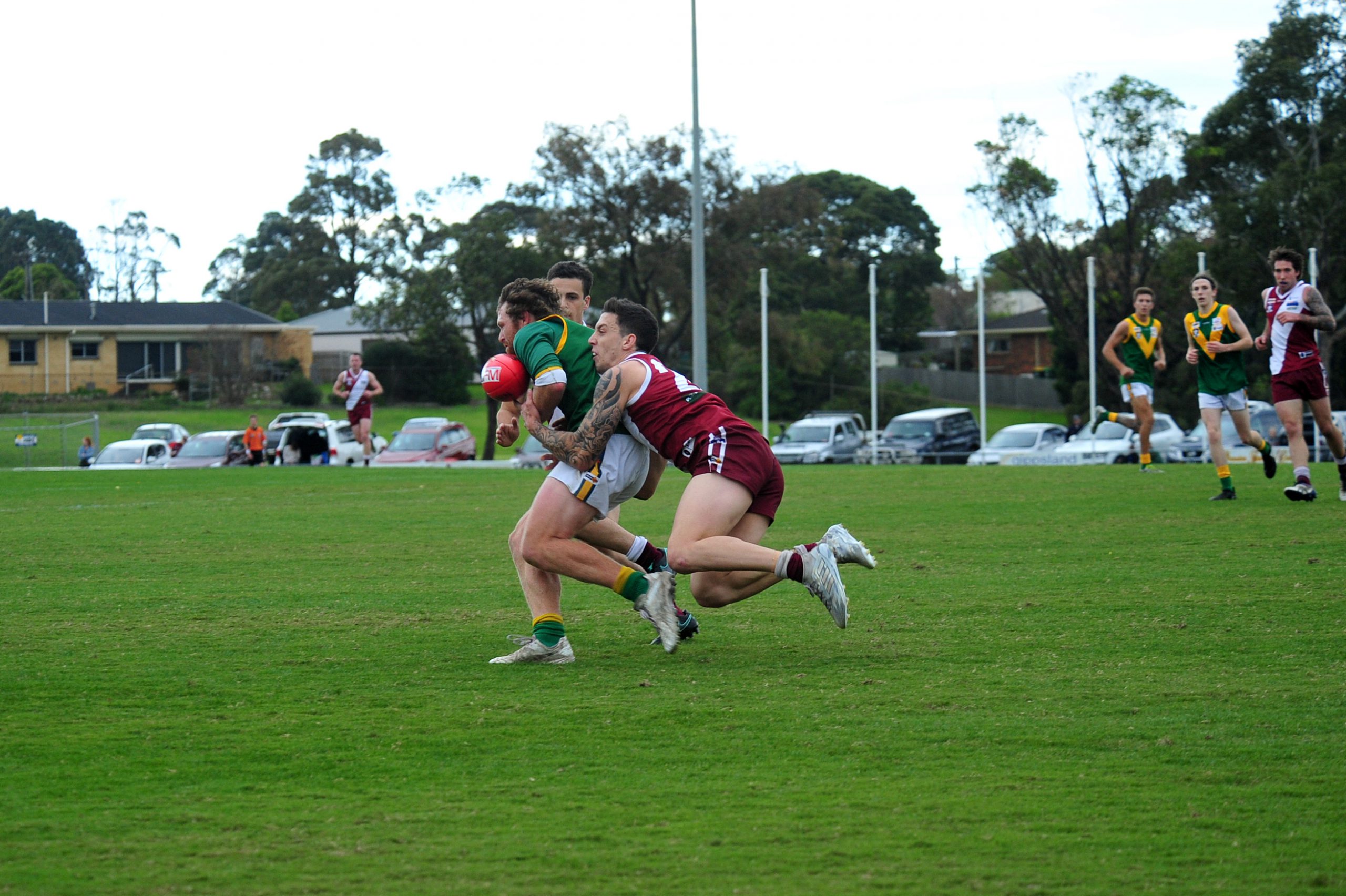 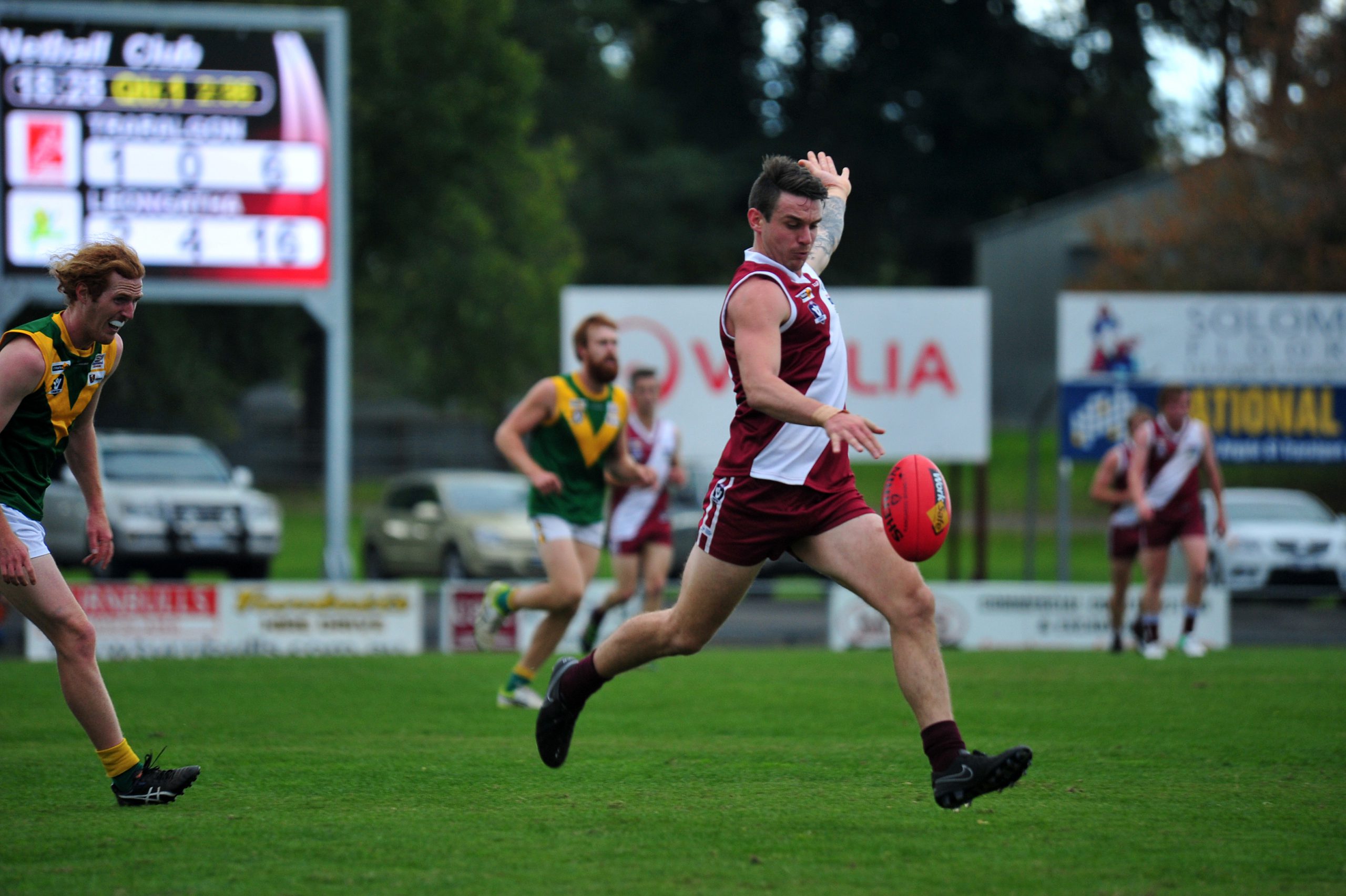 Once again Latrobe Valley teams are riding high after registering convincing wins in the fourth round of the GL.

Of all the sides, Traralgon had the most to gain with its 30-point win over flag rivals, Leongatha.

The effort puts the Maroons on top of the table.

Add to that Maffra’s loss, and Traralgon leads the league all on its own.

Despite being eight points adrift at the end of the first quarter against Leongatha, the Maroons were able to fight back to level at half time and then go on for the solid 15.3 (93) to 9.9 (63) win.

Especially pleasing for Collison was his side’s effort all over the ground in the second half.

The Maroons were able kick away from the Parrots, while curtailing the visitors’ scoring opportunities

“It was really balanced,” Collison said.

“The boys’ defensive pressure was excellent. The way we chased and pressured Leongatha when they had the footy was as good I’ve seen.”

Lee Stockdale kicked three to take his season tally to 12 and Mark Collison was among the best, also kicking a goal.

For the Parrots, Josh Hopkins and Zak Vernon each had a pair.

The Lions have turned in the fifth most behinds ever scored in the Gippsland League during their demolition of Drouin.

“We understand where Drouin are at the moment, we’ve been there ourselves, it’s not a great place to be.

“We had a good win but to their credit they never gave up. It was impressive. The scoreboard kept going up and they kept giving in effort.

While the 28 behinds didn’t matter for much in the end, Blaser said the final score line could have been a lot worse.

“It wasn’t a wonderful day in Moe to have shots at goal,” he said.

“It was windy and wet but probably 10 of the shots should have been goals and if we had our time again they would be goals.”

Darnell Grech for the Lions did the most damage with the boot, kicking six.

FOUR quarters of solid football enabled the Tigers to get back even on win/ loss for the season with a 36-point home victory over Sale.

Morwell held the visitors goalless over the first half and despite a third quarter comeback attempt, the Tigers saw off the Magpies 12.18 (90) to 8.6 (54).

The win was a relief for Morwell coach Joel Soutar, whose side would have been staring down a one-and-three start had things not going their way.

“Early on we were really good, we started playing the way we want to play.

“In the first half it was a bit breezy and we didn’t capitalise on the other score board as much as we could.”

While the Tigers got the job done in the first half, Soutar said he was wary of a Magpies comeback.

“When the rain came down it was a bit scrappy but we had done the work, starting with a little bit of lead,” he said.

“It made it a bit easy to grind it out and keep that margin at 30 or so points.”

Jack Mclindin kicked all but two of Sale’s goals, while Hayden Britten had four for the Tigers.

Morwell young gun Anthony Rosato, who is looking down the barrel of rep duty this weekend, added a goal. All three players were named among the best on ground.

Warragul grabbed a 23-point lead in the first quarter and never gave it up.

By half time the Gulls had stretched it out 35-points and while the Eagles won the third and fourth quarters, it wasn’t by nearly enough.

Wonthaggi has registered two wins in a row for the first time this season, victorious over the travelling Red Legs 12.7 (79) to 5.7 (37).

Even until quarter time, the Power powered away holding the visitors scoreless in the final.

The Gippsland League now heads into hiatus for the weekend as interleague footy takes over.