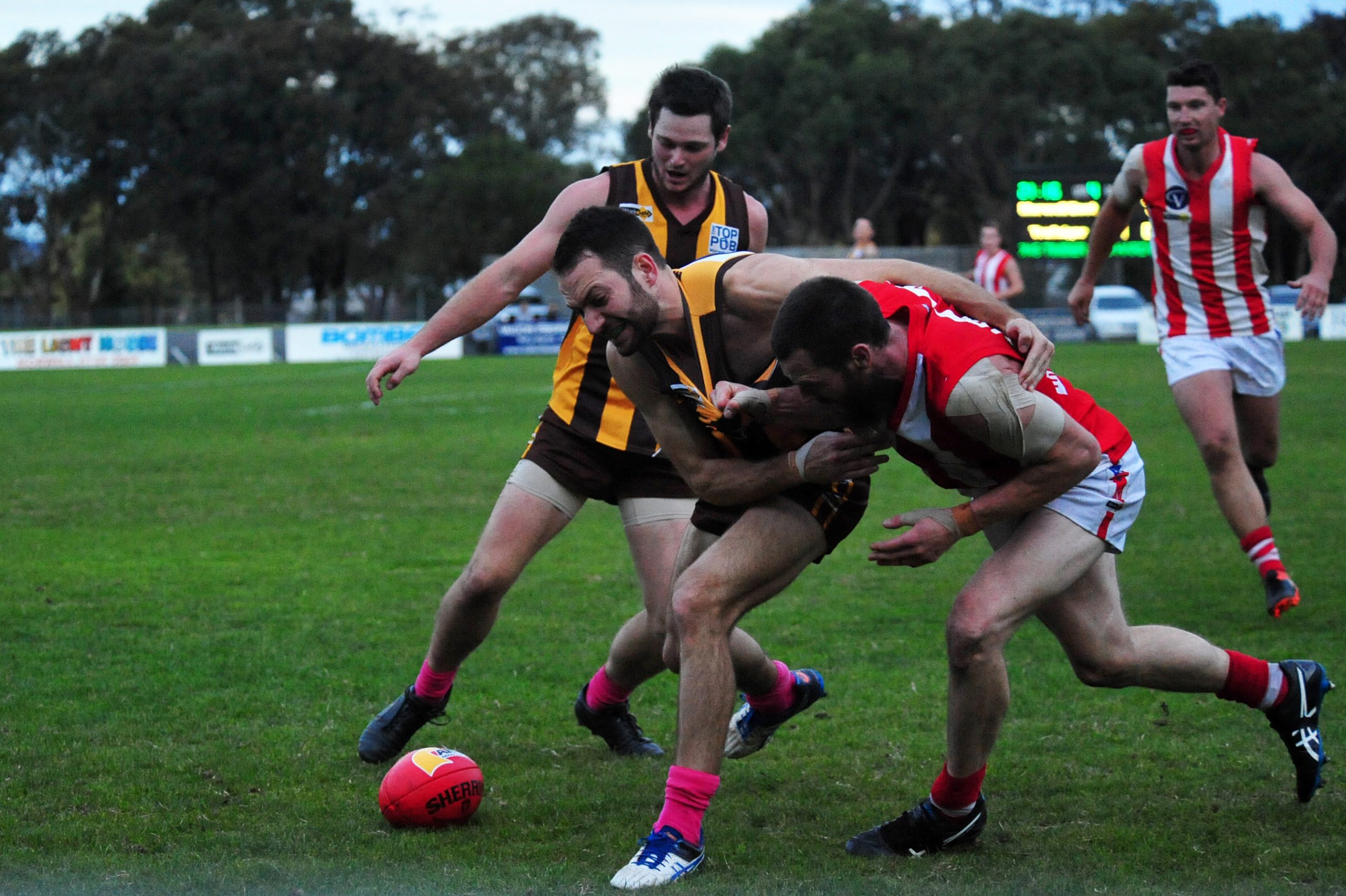 Only four points separate first from fourth at the halfway point of the Mid Gippsland Football League season, with three teams in hot pursuit of reigning premier Newborough.

Yallourn/Yallourn North, Yinnar and Thorpdale are all breathing down the Bulldogs’ necks as the MGFL returns from its break over the Queen’s Birthday long weekend.

After nine rounds, Newborough has only dropped points once this season after it was narrowly edged out by the Blues in a two-point thriller at Thorpdale.

The Bulldogs’ depth will be tested this week when they travel to George Bates Reserve to face the Bombers in their first clash since round one.

In that clash, Newborough clinched a 19-point victory over its 2016 grand final foe after overcoming an 18-point deficit at three quarter time.

The Bombers kept cool under pressure last round to record a one-point victory over Thorpdale which left them in second place on percentage.

In Newborough’s latest outing it overcame a spirited challenge from Hill End to seal its spot at the top of the table.

Hill End will aim to take the momentum generated from its match against Newborough forward into the weekend when it hosts Morwell East.

The Hawks will be flying high after thrashing bottom-placed Boolarra on the road last round by 76 points.

But the Hillmen should provide a stiffer challenge and Morwell East will not be able to rest on its laurels after struggling to dominate in its recent close defeats, including a one-point loss to Trafalgar in round eight.

On home turf, Hill End will be looking to surprise its sixth-placed opponent despite failing to overcome them earlier in the season.

Fifth-placed Trafalgar has enjoyed a mixed season having won five and lost four but will look to improve that record when it takes on inter-town rival Yarragon on Saturday.

Ninth-placed Yarragon will hope the week off, combined with the fact Trafalgar is coming off a 37-point drubbing at the hands of Yinnar in round nine, will boost its chances this time around.

After starting strongly, Mirboo North has dropped to fourth on the ladder after going down to Yallourn/Yallourn North by the slimmest of margins last round.

But the Blues will know that percentage is the only thing keeping them from out of second spot on the ladder.

They will also take solace from the fact they were not at their best against the Bombers and will look to make a statement against the seventh-placed Tigers.

Mirboo North has a tough fight on its hands but will be confident after beating a struggling Yarragon side by 44 points last round.

Yinnar will expect to walk away with a win this round against bottom-placed Boolarra after recording a big win against Trafalgar in round nine.

Despite having home-ground advantage, the Demons should struggle to overcome a Magpies outfit which has only lost two games this season.