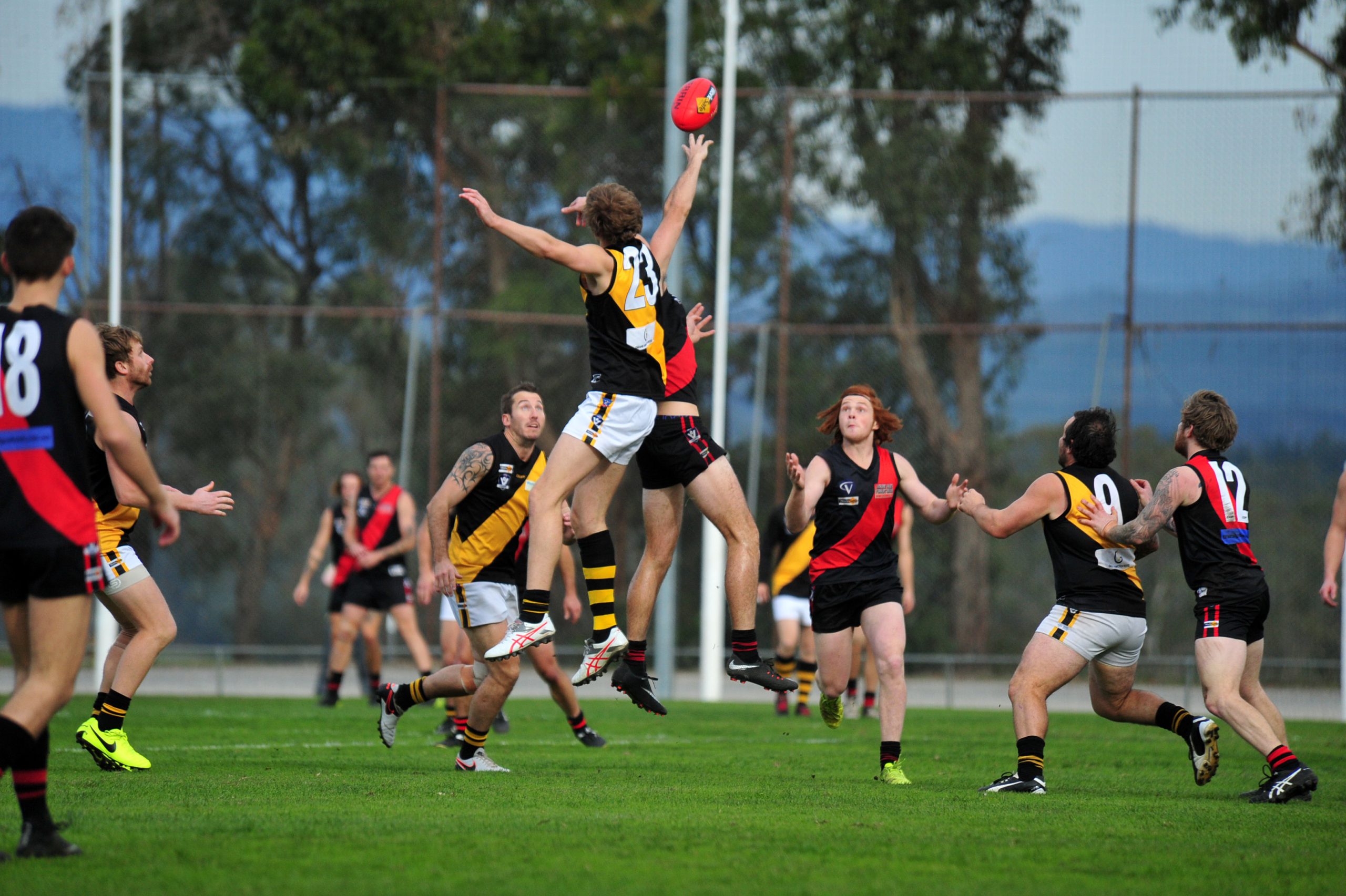 A grand final rematch will be game of the round this weekend as Heyfield takes on Sale City at Heyfield’s Gordon Street Reserve.

It’s not the first time the Kangaroos will get a sniff of victory this year after they defeated the Dogs by almost 10 goals back in round one.

Incredibly, the last time they met before round one was the 2016 North Gippsland grand final where the Dogs won by 53 points against Heyfield at Traralgon Recreation Reserve.

Both teams sit with equal points on the ladder, only separated by percentage, after both losing one game each this year.

In other games, Gormandale will seek its first win of the season against Cowwarr after the Saints lost to the Demons by 42 points at Yarram back in round nine.

Glengarry will go in as underdogs against Churchill while Traralgon Tyers United will host Yarram at home.

And in the final game, the Wildcats will travel from Woodside to play Rosedale at home in a fifth versus ninth clash.

In hindsight, there’s no doubt the Magpies and the Roos would have appreciated the long break after the Queen’s Birthday weekend as both lost by more than 90 points in round nine.

Regardless of previous match ups, round 10 in the North Gippsland league should provide some cracking local footy.

All eyes will be on this top of the table clash on Saturday as second plays first in the North Gippsland league.

Both teams will be hoping for a more competitive performance this time round after both the Dogs and Ross respectively lost by more than 50 points in their previous two clashes against each other.

First it was last year’s grand final when Sale City managed to kick only five goals in a less than average grand final performance, losing by 53 points.

The tables then turned in the next immediate game following with Heyfield taking the cream in a 13 goal blow out where Sale City only managed to snap four goals.

Both the Dogs and the Roos come into the game with good form, winning their round nine games by 94 and 98 points, respectively.

Plenty could be said about these two North Gippsland rivals, but it’s unlikely to do the game justice.

The real question is, can these two teams play a close, competitive game?

The Magpies will be seeking redemption this week after being slaughtered by the Dogs at home two weeks ago.

Churchill will be much the same after losing by four points against Woodside in round nine.

It will be the first time in three weeks the Cougars have played at Gaskin Park after the Queen’s Birthday weekend last week.

It was a close fought game last time these two teams played in round one earlier this year, as the Cougars snuck home to take the four points by three goals.

It’s likely to be the second most watched game this round, behind Heyfield and Sale City, with a close margin on the cards.

The Tigers will attempt to march the Saints out of town in what could be their first win of the season.

Cowwarr walked away 131 point victors in round when these two teams last played, a margin that’s been one of the biggest blow-outs in North Gippsland footy.

However, both the Tigers and the Saints lost considerably in round nine, somewhat allowing for an open slate on Saturday.

The Saints have had a balanced season so far with four wins and five losses, providing a reasonable platform to make five-and-five.

If pigs fly, Gormandale will be in its best position all year to snap a win.

It’ll be a battle of navy this round as Woodside make the trek up the South Gippsland Highway to play Rosedale at its home ground.

The Blues enter the game with somewhat impressive form after recording their first win against bottom of the ladder Gormandale in round nine.

However, the strength and pressure of the Wildcats up front will likely prove too strong for Rosedale, which has had an average on-field season.

The Wildcats pumped the life out of the Blues in round one this season, winning by 51 points in a result which is likely to be witnesses again on Saturday.

In the last game of North Gippsland football, the Demons will travel up to Traralgon to contest their good form so far this season.

Yarram will look to stamp its authority on the competition and again highlight why they should be considered as a North Gippsland finals’ contender.

The Demons have won seven of their nine games played while the Bombers will seek to move in on their fifth win for the season.

While the Bombers lost by 98 points in round nine, the Demons come into the game favourites after a 42 point touch up over Cowwarr in round nine.

If the Demons can improve their consistency in front of goal, based on previous stats, this game could encompass the biggest margin for round 10.