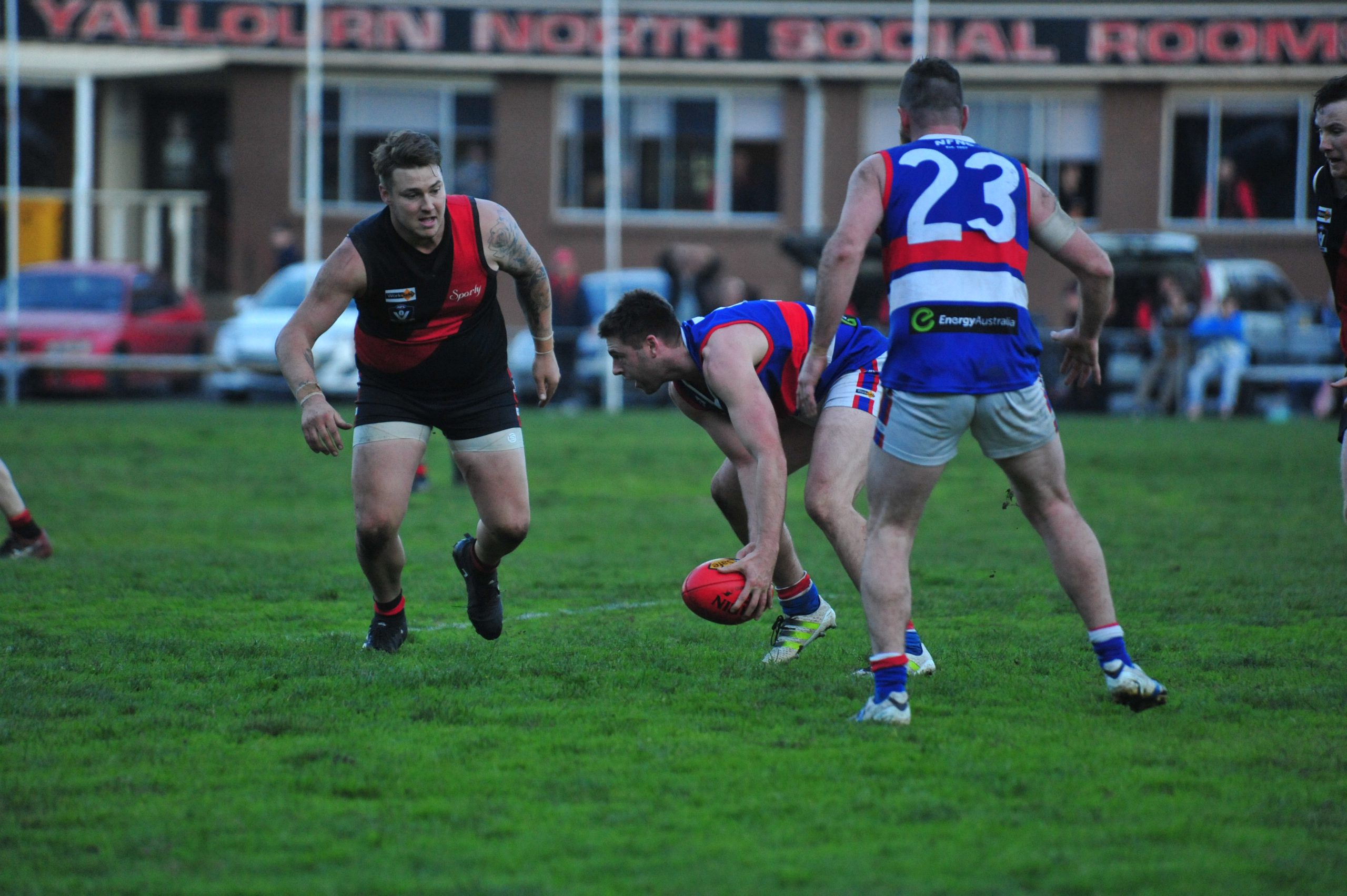 Yallourn/Yallourn North has knocked reigning premier Newborough from the top of the table after putting in a strong second-half performance at home to overcome its last season grand final foe on Saturday.

Things remain tight at the top of the MGFL ladder at the end of round 10, with Yinnar, YYN and Newborough, occupying the spots one to three with 32 points each.

Despite losing to Mirboo North on Saturday, Thorpdale is in hot pursuit – holding four points off the pace in fourth place.

Not much separated the two teams going into the main break, with a single behind the difference as the Bombers finished 5.4 (34) to Newborough’s 5.3 (33).

From there, the game kicked up a few gears as YYN showed its dominance – kicking five goals to the Bulldogs’ two to take a decisive 10.5 (65) to 7.4 (46) lead into the final change.

The Bombers outscored their opponent in the final quarter to overcome their 19-point round one loss to Newborough, taking a 26-point victory.

Best on ground for YYN was Lachlan Little, while Phillip Hicks was the Dogs’ best performer.

The Bulldogs now find themselves in third place ahead of what should be a fierce home contest on Saturday against the Blues.

Boolarra’s horror season continued on Saturday with a 92 point thumping at the hands of Yinnar on Saturday.

Both teams started slow with Yinnar having plenty of chances at goal in the first quarter but failing to convert.

Boolarra struggled to find the goal posts in the second as Yinnar started to dominate with three more goals and a further five chances that went for a behind.

Yinnar stepped it up a gear for the rest of the game with Boolarra only managing to score one goal in the third quarter.

The Pies totally dominated the home team in the final two quarters to come out with a big win.

Danny Campbell was best on for Yinnar, while Daniel Wilson took honours for Boolarra.

Liam Visser scored five for Yinnar to keep his average goals per game at a healthy 4.25.

Chase Saunders added to his tally on the goal scoring ladder with another three goals for Boolarra.

The week off did not help Hill End as it was unable to record a home victory over Morwell East on Saturday.

The Hillmen would have been buoyed after pushing Newborough in their round nine clash but were unable to display the same energy, going down 6.9 (45) to 10.7 (67).

A fairly low-scoring encounter until a late flurry of goals in the final quarter, the Hawks led at every change.

Both teams managed four majors in the final quarter.

Best on ground were Brendan Evans for the Hawks and Robert Fiddelaers for Hill End.

Mirboo North has shocked Thorpdale to take honours in their local derby on Saturday.

Thorpdale has played some great football during the first half of the season and was top of the ladder as recently as round eight.

The first half of the game was closely fought with both teams holding their back lines close, particularly during the first quarter with only one goal each for both teams and Mirboo North narrowly ahead 1.3 (9) to 1.1 (7).

The Tigers kept up the pressure to lead at the end of all four quarters and dominate during the second half.

Mitchell Wightman was best on ground for Mirboo North, while Deen Allen was the Blues’ best performer.

This was short lived as home team kicked it up a notch during the second quarter to extend its lead to 19 points at half time.

The Panthers struggled to get back into the game and Trafalgar gave them little chance to get forward to find the goal.

Best on for Trafalgar was Hayden Farrell, who shared his team’s goal kicking honours with Rhys Holdsworth, each kicking three majors.

Jake Cropley best on for Yarragon in a performance which included no multiple goal kickers, with six players managing one each.