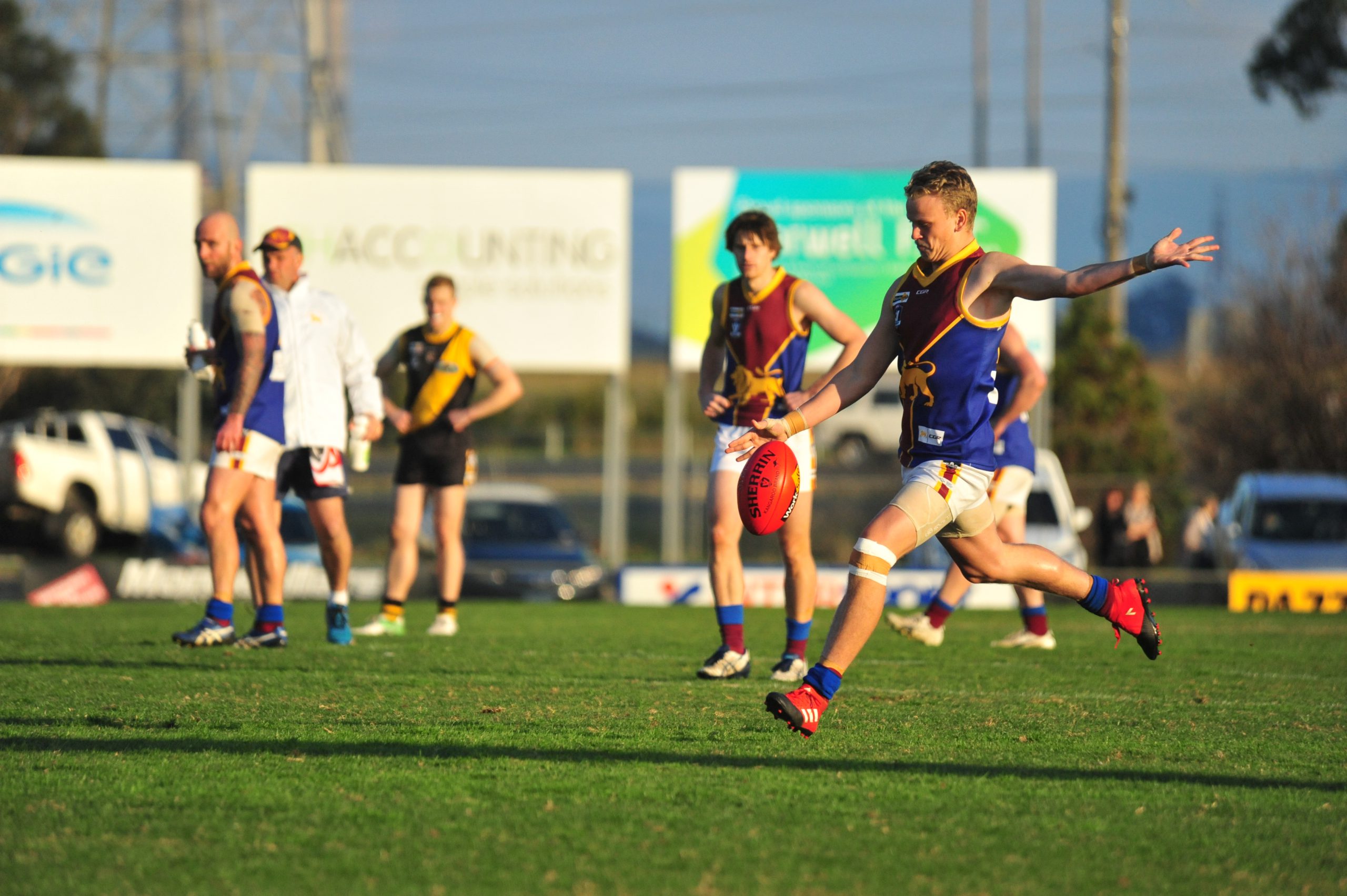 Moe has upset Morwell to win by 14 points at Morwell Recreation Reserves after trailing by 33 points at quarter time.

In a stunning turnaround, the Lions came back in the second quarter to kick five goals, keeping the Tigers to one goal and closing the gap to 13 points at the main break.

With accuracy from Ashleigh Dugan and Devon Soutar, the pair combined to kick seven goals as the Tigers prowled into the fourth quarter with a five point lead.

“It was an interesting day, Morwell came out really well, but our first quarter was horrible,” Moe coach James Blaser said.

“After the first quarter it was a real team effort with a good performance by Dugan up front and Ben Morrow in the ruck.”

“I thought we came out and played some really good footy in the first quarter,” Morwell coach Joel Soutar said.

“We started turning the ball in the second quarter, it was a bit of an arm wrestle… credit to Moe.”

Isaac Abas battled throughout the game for Morwell, according to Soutar who said “he really got the team going in the first quarter”.

Tayler Weatherill also received a notable mention for the Tigers after playing well down back.

The Lion’s win sees them remain fourth on the ladder, with Morwell trailing behind in fifth with four wins, four losses and a draw.

Traralgon continued what has been an almost perfect season after snatching its seventh win, obliterating Warragul by 69 points 17. 11 (113) to Warragul 6. 8 (44).

What started out as a low-scoring game changed in the final term when the Maroons booted eight goals in the last quarter and almost doubling their three quarter-time performance.

“We had a good win, it was good to get back on the winners list after having reasonable results over the last couple of weeks including a draw against Morwell,” Traralgon coach Mark Collison said.

“Our defence was much more improved and it was good to get away with two wins as our reserves and seniors both won.”

At quarter time, Traralgon led by nine, increasing the lead to 14 at half time before advancing to a 20 point lead into the final break.

Dylan Loprese booted five for the Maroons followed by Luke Di Ciero who slotted three through the sticks.

“Dylan took a lot of good contested marks which was a feature of the game while Michael (Stockdale) used the footy really well up back.”

Warragul coach Steve Kidd said he was pleased with the effort of his team for the first three quarters.

“We just let Traralgon off the leash in the last, our players didn’t continue on with the same intensity they did for the first three quarters,” Kidd said.

“When you’re playing against a top side like Traralgon, you just can’t do that.”

Traralgon remains on top of the ladder with seven wins, a loss and a draw while Warragul sit on eighth with four wins and five losses.

Maffra has walked away the victor in the highly anticipated grand final rematch with the reining premier inflicting a 39-point defeat on Leongatha.

The Eagles set the tone early in proceedings at Maffra Recreation Reserve, taking a 3.5 (23) to 1.3 (9) lead by the end of the first quarter.

The result leaves the two teams equal on points, with the Parrots holding on to second by way of percentage with Maffra in third.

James Huts was named best on ground for the Eagles, while Tom Marriott was best for Leongatha.

Aaron Hillberg was the Parrots’ top goal kicker with two, while Kade Renooy did the damage for Maffra with three.

Sale continues to languish near the bottom of the table after going down by 38 points to Wonthaggi on Saturday.

The Magpies looked to have the advantage early at Wonthaggi Recreation Reserve, leading 3.4 (22) to 1.2 (8) at the end of the first quarter.

From there, the home team found momentum and proceeded to shut its opponent out.

The lead grew to 30 points by the end of the third quarter, with Sale only managing one goal to Wonthaggi’s three in the term.

Dominic O’Connor was the Powers best on and top goal kicker with four, while Jamie Sweeney was the best performer for the visitors.

Drouin had a lot to think about on the long drive back from Bairnsdale after losing by a mammoth 117 points.

Russell Cowan was the Redlegs’ best while Damian Cupido was their top scorer with seven majors.

For the Hawks, Bob Mccallum was best while Michael Theodoridis was the only multiple goal kicker with two.