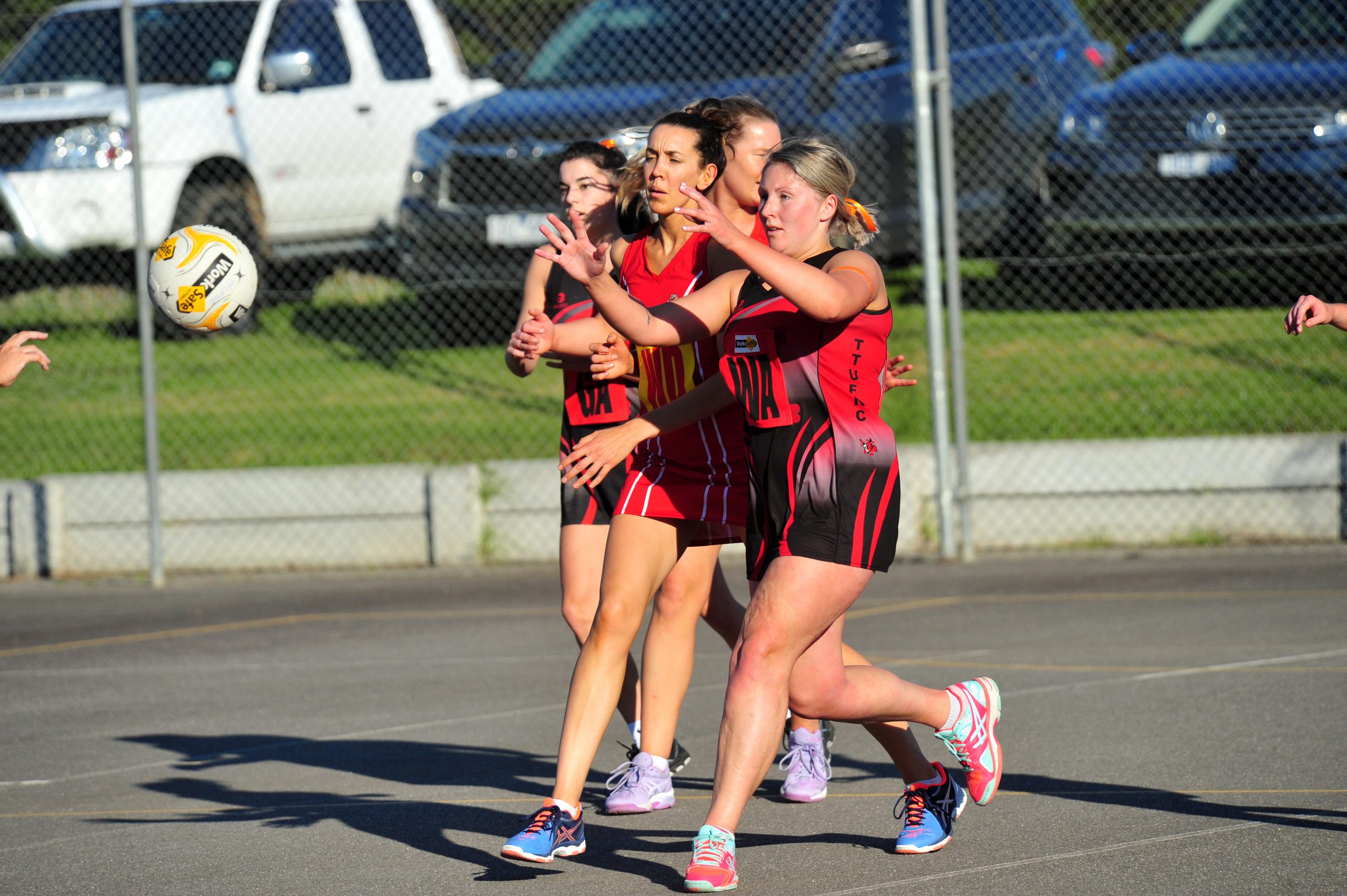 After slogging it out for four quarters on Saturday, Traralgon Tyers United was unable to secure its second win for the season after it was defeated by Yarram at home by 11 points.

It’s been a tough season for the Bombers who are set to play the Wildcats, who sit second on the North Gippsland A grade ladder with eight wins and two losses, at Woodside on Saturday.

TTU netball manager Sharon Rodgers attributed the 35-46 loss to a number of factors but was pleased with the first quarter performance after out-shooting the Demons.

“At half time we were down by one goal then we made a few changes which impacted the momentum of the game and that’s where it was lost,” Rodgers said.

“The defensive pressure through the mid court was good but TTU struggled to capitalise on the turnovers.”

Danielle Rodgers provided a lot of drive for the Bombers through the mid court, while Sammy Labros had a “very accurate” game in goals. Both sides wore orange arm bands to raise awareness of those impacted by family violence following an orange-coloured smoking ceremony.

“It was a promising result and it was lovely to see TTU’s respectful tribute raising awareness of family violence,” Yarram Netball Club president Sarah Barclay said.

“It was a closely contested game for four quarters, Yarram’s fitness got them over the line in the last quarter and saw a similar score to round one where the Demons won as well.”

Yarram will have a test on its hand this week as the team hits the road to Heyfield to take on the undefeated A grade Kangaroos.

In what was the biggest game in round 10, seventh-placed Churchill Cougars took on the third-placed Glengarry at home and logged a five-goal win, 42-37.

Churchill A grade captain Kat Hutchins said the Cougars started off strong in the first, but dropped off in the second and third quarters, going into three quarter time trailing by three goals.

“The girls stepped up and put on a dominant last with an eight-goal turnaround,” Hutchins said.

Cougars’ goal keeper Kassie Meal was awarded best on court, while Maddison Burney received a notable mention for her work in defence.

Churchill sits seventh on the North Gippsland A grade ladder with five wins and five losses, behind Glengarry at third with seven and three.

The Cougars will hit the road to Sale this round to take on the sixth-placed Magpies, while Glengarry will host Gormandale at home.

The Tigresses travelled to Cowwarr with the possibility of nabbing their second win for the season, but the Saints were not going to let that happen, with a 41-33 win.

Taking the lead early in the game, the Saints didn’t let go as they led at every break in the game.

Cowwarr A grade coach Ashlea Stubbs said she was pleased with the game, saying the team was dedicated to maintaining a top four position.

“The girls are functioning really well as a team and they’re improving their consistency each week,” Stubbs said.

“Gormandale are a beautiful team to play against and they matched us well.”

The Saints’ defence was their strength, but Stubbs said agreed goals netted “perfectly” throughout the game.

The Tigers are travelling well considering they’re missing support from goal defence Ebonee Hodgett, who is expected to return to the side before the end of the season.

Cowwarr will host Rosedale at home in round 11 while Gormandale hits the road to Glengarry.

Woodside continued to show its contention for a top finals spot after knocking over the Blues at Rosedale by 13 points, 44-32.

It was a hard fought game for the first three quarters with the Wildcats down by one at quarter time and up by a goal at half time.

Woodside A grade captain Carly Foat said the team managed to pull away in the third.

“We had one of our 17 and unders come and do a really good job in Georgie Banik,” Foat said.

“Georgie played at wing attack for the whole game and she did really well defensively, she had a few turnovers and fed the ball really well.”

The “full team effort” saw the Wildcats secure their eighth win for the season with Rosedale lagging behind at eighth with two wins and seven losses.

Woodside will host Yarram at home this week while the Blues are on the road to Cowwarr.

In the final game of North Gippsland A grade netball, the undefeated Kangaroos won by seven points against Sale City at home.

With an unsurprising 31-25 result, Heyfield showed its class as a true contender for this year’s A grade flag.

This weekend the Kangaroos are set to take on the fifth-placed Demons at Yarram while Sale City will host Churchill at home.