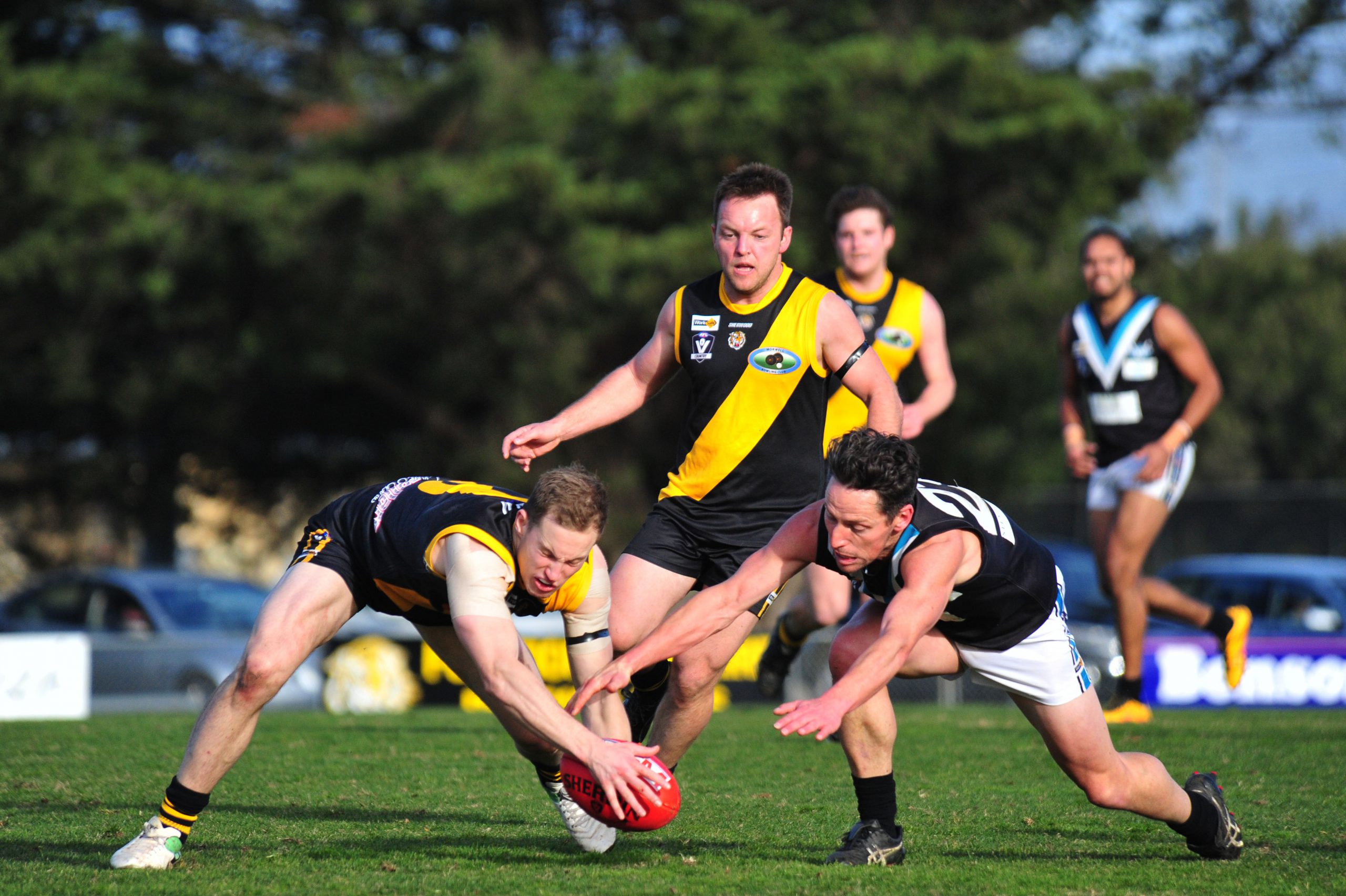 The relentless Parrots didn’t give Sale an inch, and the Magpies were held to just a single goal in the first half.

Jarrod Freeman was the only multiple scorer for the Magpies with two majors.

The win is Leongatha’s 14th for season 2017 and sees it retain top spot on the Gippsland League ladder, ahead of Maffra on percentage.

Ladder leader Leongatha will meet Wonthaggi in round 17, while Sale will face Bairnsdale on the road.

The Eagles went into the final break with a 16-point lead and fought-off a spirited five-goal last term from the Lions to win by three points.

Maffra had nine individual goal-kickers with Mitchell Bennett’s two the only multiple haul.

Dylan Farrell and Karl Mutke were serviceable for the Lions and each scored two majors.

Lachlan Channing, Jarryd Clohesy and Danny Butcher were awarded best-on-ground honours for the Eagles, while Darnell Grech and Mitchell Stanlake were among the best for Moe.

Moe visits Wonthaggi next week for the penultimate home and away round and Maffra hosts Drouin.

The win is Morwell’s eighth for the season and sees it hold onto fifth spot on the Gippsland League ladder.

The Tigers led at every break and were unrelenting in defence, holding the Power to just five goals for the day.

Will Kennedy, Anthony Rosato and Dan Musil were standouts for the Tigers while Luke O’Connor and Jack Ridewood were two of the best for Wonthaggi.

Morwell will look to continue its winning form when it hosts Traralgon in round 17 while Wonthaggi takes on Moe at home.

Traralgon at home was always going to be a tough ask for Bairnsdale, and the round 16 fixture proved to be just that with the Maroons running out 14.11 (95) to 3.7 (25) winners.

The Redlegs came within 29 points at half time, but a five-goal third term by Traralgon put the game beyond reach.

Playing-coach Mark Collison was awarded best-on-ground plaudits for Traralgon in its win, with Charlie Walsh claiming the honours for Bairnsdale.

Collison said the Maroons showed plenty of promising signs ahead of a 2017 finals berth.

“We played a full four quarters which we haven’t done in a long time so that was a really good sign heading in to finals,” he said.

Collison also extended praise to every one of his 22 players.

“It gets said a lot but everyone one contributed which was the most pleasing thing and not one player had a poor day,” he said.

Traralgon will face the in-form Tigers next weekend in round 17 action and Bairnsdale will do battle with Sale at home.

The win is the Gulls’ seventh for 2017, and leaves them trailing Morwell in fifth with eight wins.

Drouin was wasteful on goal in the first half with eight scoring shots for just two majors. The second half was a similar story and the Hawks finished the day with just five goals from 19 scoring shots.

Brayden Fowler was powerful up forward for the Gulls’ with his bag of six goals enough to earn him six votes for best-on-ground.

Nathaniel Paredes was also handy for Wonthaggi with four majors of his own.

Michael Lynn, Thomas Kelly and Jake Hughes joined Paredes with best-on gongs while Darcy Irwin and Cambell Jolly were two of the best for Drouin.

Warragul will make a late run for finals but will first have to overcome ladder leader Leongatha in round 17.

It doesn’t get any easier for Drouin on the run home as it travels to take on second-placed Maffra.