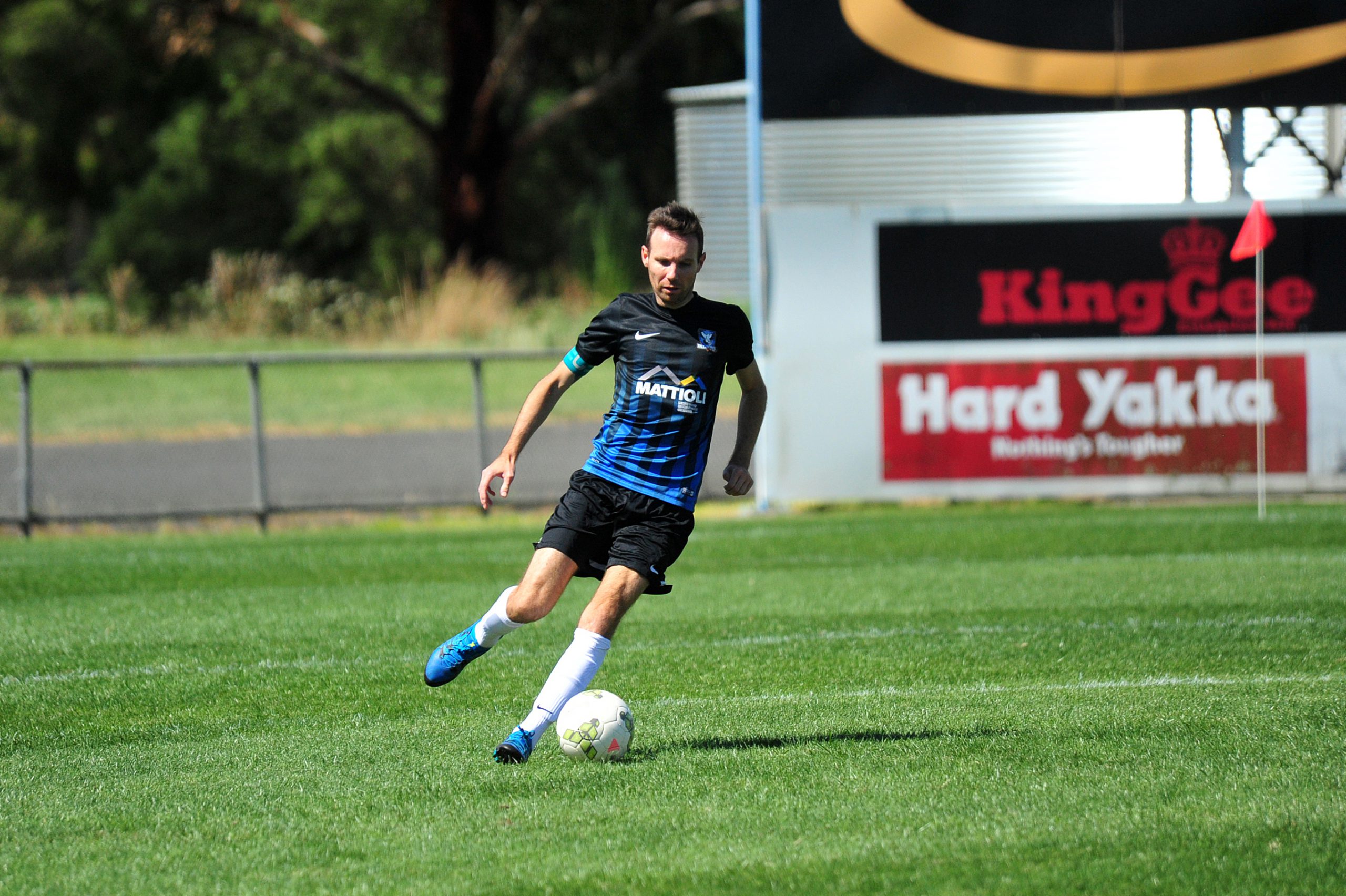 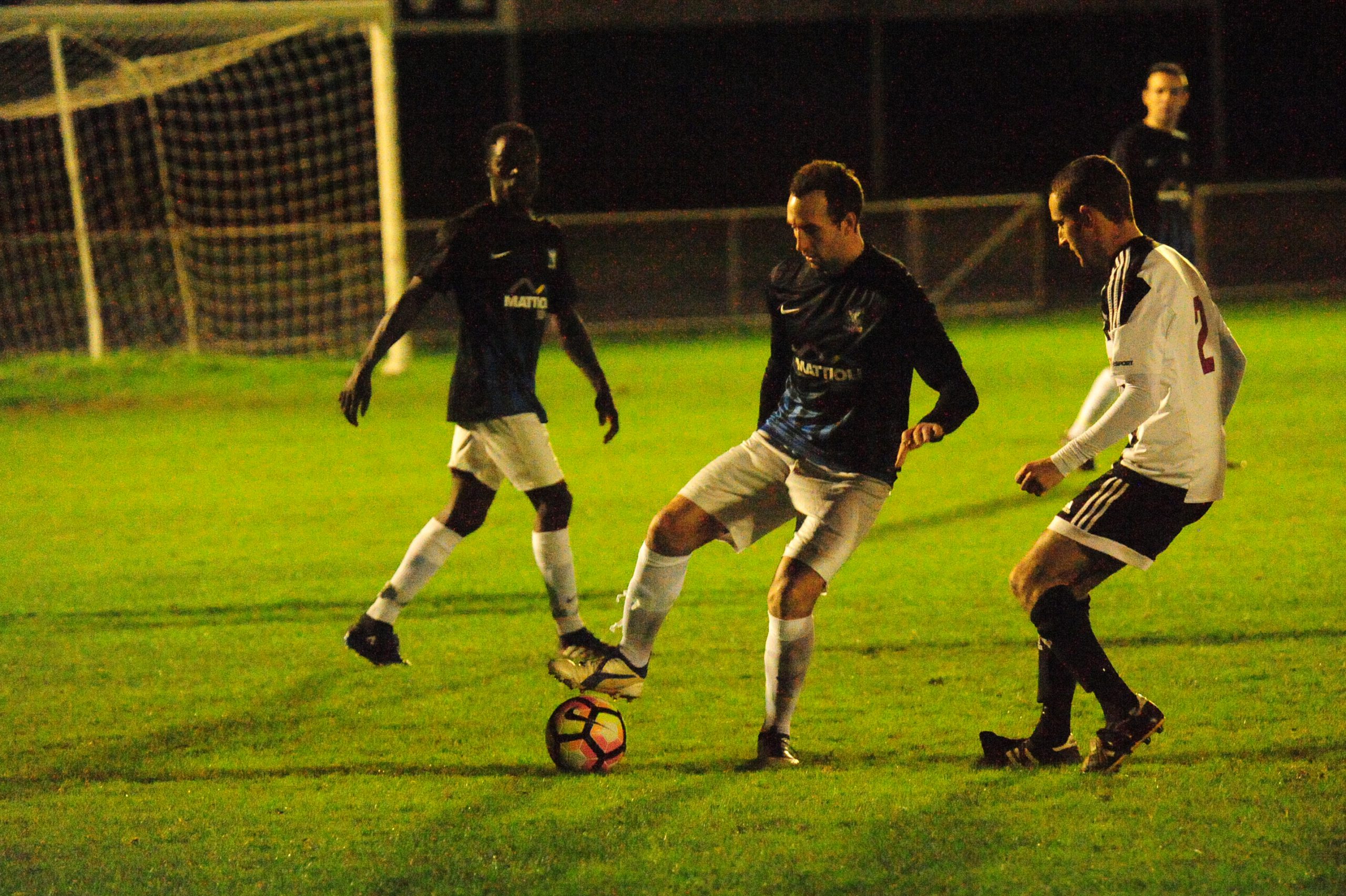 Falcons 2000 are the 2017 League Champions after finishing on top of the ladder with 53 points from Olympians on 46.

With two matches to play, Falcons can’t be dislodged from the top spot after the 3-2 win over Monash.

Monash was a worthy side, putting pressure on the league leaders in a tough tussle.

It was Jamie Pistrin who broke the shackles at 28 minutes into the game, scoring his 20th goal for the season.

The Wolves tried to hold out under pressure but it was Falcons who doubled up with Sam Amaira scoring a classic only five minutes later.

Monash was in trouble but bravely fought back with a goal in injury time through Shawn Lawrence.

A 2-1 scoreline at the break wasn’t flattering for the league leaders as they tried to show their dominance.

Play went end-to-end as both defences tried to negate the strikers but a lapse by Monash saw nippy Sam Amaira flash in for his second at 75 minutes.

With the game petering out, the smallish crowd was brought alive at 90 minutes when Monash struck back with a superb shot from Thomas Bramstedt.

Falcons steadied in the last few minutes to hold on to their 3-2 lead to win the League Championship.

Any thought of causing an upset win over Sale, the Tyers vision was dashed within the first six minutes when Sale belted in two goals through the speedy Nathi Khamchom. Tyers was reeling under the constant barrage from the Sale camp.

The pitch was slow after overnight rain and players had trouble staying upright.

The Lightning got a goal back from Dylan Cramer at 23 minutes and made it hard work for Sale in the windy conditions.

Sale was on the attack and twice within three minutes Tyers was forced to defend on the last line, eventually cracking under pressure at 35 minutes through Josh Ryan.

Tyers was down to 10 men when Nick Bridges was shown a red card minutes before half time.

Leading 3-1 at half time encouraged the Sale team and they went powering ahead in the second half to register another three goals through Nick Buckhoreelall at 68, Kieran Horgan at 79 and Matthew Manning completed the rout at 89 minutes to give Sale a much-needed win of 6-1 which keeps it just in sixth position.

East Gippsland created its own bit of history with a first ever win over Fortuna.

Last time the sides met it was a 6-0 rout by Fortuna but this time around the East Gippsland Eagles pulled out a major coup to down Fortuna 2-1 but it took 74 minutes for the final result.

East Gippsland opened the match at 24 minutes with a goal to Thomas Foster which took Fortuna by surprise, with the urging of the local fans the East Gippslanders upped a notch and produced patches of good skills.

Fortuna had to rely on gun striker and coach Luke Cheney to equalise and his 34th-minute goal was important to the team.

At the break it was all tied up at 1-1 and after the break both strived to break the deadlock and it was left to defender Jaydon Steele to break the Fortuna defence at 75 minutes to give the East a 2-1 margin which they kept to the finish despite pressure from Fortuna.

Newborough/Yallourn’s comfortable win over Moe was only its seventh win in 40 matches against the Red Devils.

It puts the Combine in fourth position in a challenging position to Traralgon City who lead them by four points.

After Moe scored the first goal deep into the first half from Nick Dasty it looked like they could go on with it but the Combine had other ideas after half time as the gun strikers the Fairbrother boys swung into action, Mark belting two within two minutes at 49 and 51 minutes to take the lead.

Moe were in disarray as the Combine went about their task and Marc McCallam ensured victory with a goal at 55 minutes.

Play was tough as Moe were forced into defending as the Combine showed good skills.

Moe was down a man at 71 minutes after a send-off and the Combine capitalised on extra player with a late goal to Dylan Fairbrother after a cross from brother Mark as the Combine raced to a 5-1 victory.

Traralgon City had to work hard against a tenacious Churchill side, last time City scraped in 1-0 and this time round the Rams made Traralgon work hard for the victory. The final score of 2-0 depicted an easy win for the Roosters but Churchill was competitive without result.

Neither team could break the deadlock, at the half way mark it was 0-0.

After the break Traralgon swung into action and it was Liam Johnson who got the first goal with a 54-minute curler.

Under pressure, Traralgon City was wasting opportunities with turnovers but the leading goal scorer DJ Matar stepped up to the plate for another classic goal, his 23rd for the season.

The Roosters keeper kept another clean sheet for the season as Traralgon City ran out winners 2-0.

After another match that was 0-0 at half time Olympians had to fight hard against a feisty Trafalgar side.

The Victory still have a chance of playing finals this year, with two matches to play and only one point from the top six they could squeeze in for their first ever final.

In their last game it was a 2-2 match and Trafalgar was hoping for a similar result or a win to gain the sixth position.

After half time, the action got hot as Olympians drew first blood when Kuku Mahmoud breeched the wall at 55 minutes he helped himself to a brace 30 minutes later with a well-executed kick which forced the Trafalgar keeper to swing the wrong way.

Only a minute later, Trafalgar exploited a slow defence and Cohan Bayles rocked one past the advancing keeper but it was too late for Victory as Olympians claimed the match 2-1.

Trafalgar will be after its fourth straight win over East Gippsland.

The Victory with a final’s chance in sight need to pick up points to give them an optimistic chance of their first finals appearance.

The return of the Paredes brothers will strengthen their striking range.

Even in their lowly position on the ladder, Fortuna will go in against Tyers as hot favourites, but after losing to East Gippsland the thinking may have changed.

Tyers is keen to win another match before the end of the season and this looks their best chance.

Fortuna in history have beaten Tyers 33 times to only three by Tyers.

The match of the round where the League Champions face off against their nemesis Traralgon City who are the only side to beat them this season a 1-0 thriller at the stadium.

Both teams possess exciting striking power which will tell at the finish.

A must win match for Olympians, last time it was a 3-0 victory but Olympians can still be wary of Monash who are capable of a surprise.

Monash are safe in fifth position and a win over Olympians would boost their morale.

Two final six teams with New/Yallourn going in as favourite but Sale need to pick up points to ensure a finals appearance as Trafalgar is hot to trot on the heels of Sale.

Two teams which have seen past glories and now both are amongst the cellar dwellers, Moe have dropped off after their exciting season in 2016 where they made the grand final and Churchill who are rebuilding.

History has Churchill winning but it could be close.