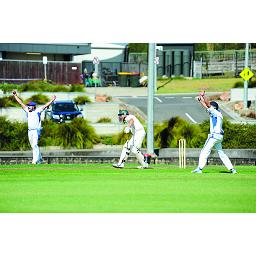 Minor premiers Churchill have etched their name in cricketing history by winning the inaugural LVDCL Premier A grade grand final.

They defeated CATS after a rain-delayed start to Saturday’s day one action at Ted Summerton Reserve in Moe.

CATS won the toss and sent Churchill in to bat where they notched up 9/122 declared after 53 overs.

Joseph Whykes and Chris Williams opened the batting with Whykes (5) the first to fall, bowled by Tinashe Panyangara when the score was on 19.

Brendan Mason joined Williams at the crease where they added just nine more runs before Williams became Panyangara’s second scalp of the day, leg before wicket for 14 runs, including one four. Captain John Keighran scored 12, including one four, from 12 balls faced but top score of the day went to Ryan Ayres with a patient 34 with four fours from 103 balls before he was run out by Tim Derham.

Ryan Harvey, 21 from 30 balls and one four was also run out.

Panyangara dominated the bowling for CATS with 5/55 from 17 overs that included four maidens.

Matthew McGrath took 2/30 from a tightly-bowled 19 overs that included 10 maidens.

In the field, Jamie Cochrane, Dylan Keyhoe, Panyangara and Aamir Raza each took one catch.

Churchill then bowled nine overs before the close of play on Saturday leaving CATS to start a warm and sunny Sunday with openers Joshua Keyhoe (13) and Jamie Cochrane (6) still at the crease.

The promising start didn’t continue with CATS all out 77 in 56 overs.

Nathan Harrup (15), Keyhoe (14), McGrath (13) and captain Ben Julin (10) were the only batsmen to reach double figures while tailender Jack Blythman fell for a duck and Tim Derham and Panyangara were both out for just one run each.

Steve Warr led the way for Churchill in a man of the match winning performance with 5/24 off 23 overs, including nine maidens. Ross Whelpdale took 3/24 from 14 while Ryan Ayres chipped in with 2/14.

Churchill faced up for a second innings at bat, scoring 3/55 in 21 overs led by Williams with 34 (four fours), and Mason with 13 which included three fours.

Mason fell first when the score was on 20 followed by Whykes on his first ball without any change to the score, to put McGrath on a hat trick with his first ball of the seventh over.

The hat trick didn’t eventuate but McGrath was still the most successful bowler of the second innings.