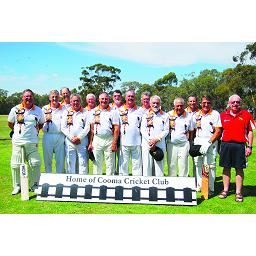 The Gippsland Goannas Over-60 cricket team fought off relegation to a lower division when they competed in the annual Echuca Carnival last week.

The Goannas, one of 20 teams competing across three division, played in one of the two division one pools.

The Goannas played the Geelong #1 team on Sunday at the Bamawm ground. Losing the toss, the Goannas batted first and reached a respectable total of 170, for six wickets from their 40 overs.

Fred Debono, Colin Carmody and Ken Bailey all retired on reaching 25 runs, while Peter Anton, 18, was the best of the rest.

Game two on Monday was played at Tongala and also saw the Goannas lose the toss and bat first against the combined Yarra Valley and Research clubs.

The Goannas started well, then lost four wickets with the score on 18, and struggled to 8/115 from 40 overs. Murray Moore was the only retiree with 25, Ian Gibson was 24 not out and Anton made 20. YVR passed the score easily, only losing two wickets.

Game three, played at Gunbower, saw the Goannas at last win the toss, and bowl first against the combined Vic Country and Benalla team.

Gordon Cowling had 2/9 from his six overs as the VCB team made 137 for the loss of five wickets.

The Goannas batsmen hit their straps with Ray Smith, Bailey, Carmody, Moore and Anton all retiring, and the Goannas reaching 0/138 with six overs remaining.

Unfortunately the win did not lift the Goannas’ percentage high enough and they were ranked fourth in their pool which made the playoff game a relegation battle.

This game was played against the team from northern Tasmania, the Twilighters, at the home of the Cooma Cricket Club.

Winning the toss, the Goannas decided to bowl first again, and the bowlers were able to restrict the score early, with Tassie just 58 runs from the first 20 overs.

They managed to reach 5/153 from the 40 overs with Moore again picking up two wickets.

This time Smith, Bailey, Moore and Anton all retired as the Goannas reached the target for the loss of just one wicket in the 35th over.

Saved from relegation, the Goannas will look to perform well again at this carnival in 2020.

A spokesman for the Goannas said the grounds the tournament was played on were all in excellent condition, the pitches were really good, the club involvement was magnificent and the whole tournament was well conducted and ran smoothly, which was a huge credit to Goulburn Murray Cricket, and Veterans Cricket Victoria.

Best performances from the Goannas were Peter Anton, 90 runs, Murray Moore, 81, Ray Smith, 79 and Ken Bailey, 77, while Kelvin Bond bowled 24 overs for the week for the magnificent figures of 3/45. Moore took four wickets, Smith and Cowling three each while Ian Gibson captained the side well and had two catches and two stumpings as wicket keeper.

Goannas captain Kevin Lanigan was unable to compete due to an injury but he did enjoy doing the scoring. Ian Southall strained a thigh muscle and was somewhat inhibited by this injury.

Tony Hawkins attended and umpired at square leg for the three pool games which was appreciated by the Goannas.

Phill Higgins played his first game for the season after returning from a back operation and recruit Chris Tudor enjoyed his participation with the Goannas.