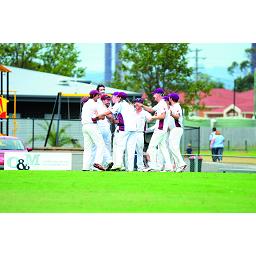 First took on second in the inaugural LVDCL A grade grand final with Latrobe turning the tables on minor premiers Centrals.

Day one play at Morwell Recreation Reserve was delayed by rain but when the skies cleared and the covers came off, Latrobe won the toss and elected to bat first.

Top scorer was Mark Lawrence who racked up a rapid fire 16 runs that included three fours before he was caught by Sam Gray off the bowling of Corey Pollard.

The only other Latrobe batsman to reach double figures was Hayden Kimpton with 11 runs.

Jamie Coltman and Benn Zomer both fell for ducks, Coltman going leg before wicket to Marc Fenech and Zomer run out by Gray and Fenech.

Dylan Freitag conceded just 18 runs in his 17 overs which included 10 maidens while Allen picked up two of his 3/5 as he bowled out Latrobe’s tail.

Gray was crucial in the field with three catches and one run out assist to his credit.

In reply at the close of day one, Centrals looked solid after 16 overs on 1/16.

The only wicket to fall was Pollard who was caught on eight by Adam Duncan off the bowling of Jamie Brierley.

Nathan Freitag led the scoring for Centrals with 12 runs. Robert Wilkie was the only other player to make double figures, scratching out 11 runs in 110 minutes from 86 balls faced.

Centrals were all out for 63 in the 53rd over, failing to reach their target by just six runs.

Tyron Gamage (5/28) and Anthony Bloomfield (4/8) did the damage for Latrobe and were well supported with catches to Adam Duncan (three), Steven Freshwater, Lawrence and Brierley, one each.

Fenech was again amongst the wickets, taking 4/16.

Man of the match honours went to Gamage for his work with the ball.

In Premier B, Nathan Wheildon of Willow Grove was awarded man of the match while the B grade honour went to Travis Pickering of Thorpdale and in C grade it was Brad Connelly of Churchill.