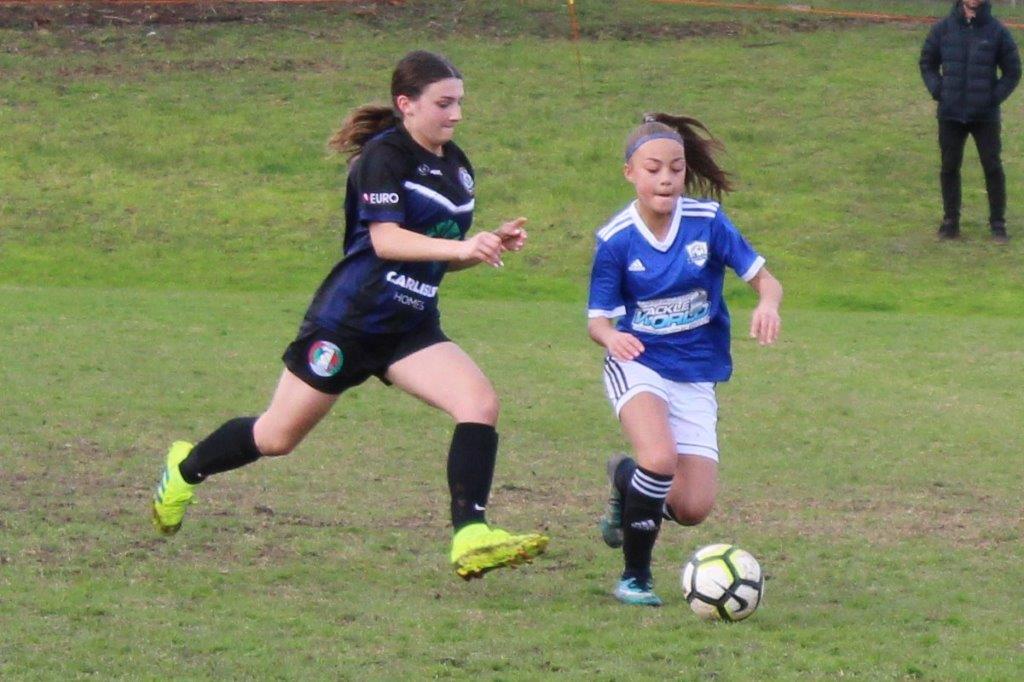 After securing a much-needed victory the previous week, the under 13 Gippsland FC boys set off to the undefeated Glen Eira in possibly their most difficult match to date.

The Gippslanders knew they were up for a challenge with the home side showing their slick passing play from the opening kick.

The boys weren’t overawed though and after a goal from Abraham Konyi they went into half-time well and truly in the match at 2-1 down.

Goals from both sides early in the second period kept the game tight, but the home side was able to show its class and scored another two goals to put the game out of reach for the Gippsland boys.

The final score, however, was not a true reflection of the game with the boys matching their opposition through the day.

The U13/14 Gippsland FC girls travelled to Glen Waverly to take on Mazenod Victory FC.

On a boggy pitch the girls started off brightly and were rewarded with the first goal scored by Malaya Noppert.

Chloe Boulton doubled the lead for the Gippsland girls with a goal direct from a corner kick that went unchallenged into the back of the net.

The girls had a well-deserved 2-0 lead at half-time.

Gippsland responded with a goal through Savannah Lapenta, restoring their two-goal lead.

The final result was a 3-1 win, meaning the Gippsland FC girls moved back into the top four.

The under 14 boys took to the Morwell pitch desperate for a win against Hampton Park.

With both teams having early scoring opportunities it was the home team who found the back of the net first through Jack McNally, following a fine team buildup.

Neither side was able to capitalise on their opportunities with the score remaining one-nil when the half-time whistle sounded.

The Gippslanders came out firing in the second half, displaying a confidence that had not been seen in recent weeks.

Hayden Berton added to the lead and Jack McNally capped off a clinical display, bagging two more goals and claim his hat-trick.

Hampton Park managed a consolation goal but it ended with Gippsland picking up a 4-1 win.

Tana Betera opened the scoring with a well-taken penalty but the Mornington side was quick to equalise, leaving it all square at the break.

With chances to both sides throughout the second half it was Mornington who scored the deciding goal.

Hoping to exact some revenge on the Mornington side that snatched the points away in the reverse fixture earlier in the season, Mornington were able to get an early goal.

Despite numerous chances the scoreline remained the same with Mornington ahead at the break, 1-0.

The Gippslanders gave themselves a great chance with a Josh Calabro-goal soon after the restart but the Mornington team were able to answer back to restore their lead.

As has been the theme throughout the season, the under 16s were able to create numerous chances but couldn’t finish, leaving them with another defeat by the narrowest of margins.