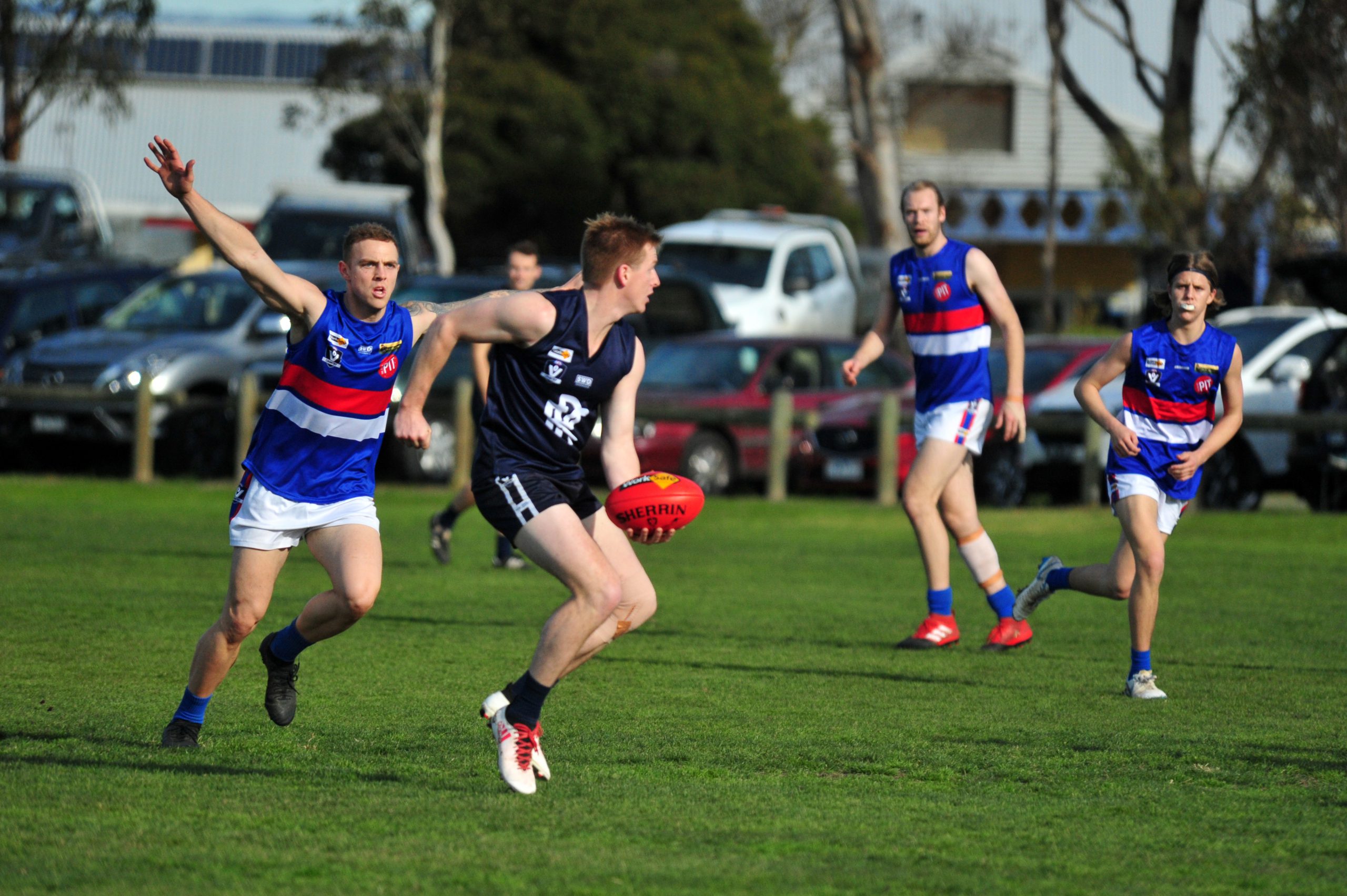 Rosedale kept the top end of the ladder within arm’s length at the weekend thanks to a clinical and impressive performance against Sale City on Saturday, 12.9 (81) to 6.11 (47).

Brandon McDonald once again enjoyed the spoils for the Blues, bagging six goals to take him to 30 from the last five outings to sit level with Cowwarr’s Shane Morgan atop the league leading goal kicker board.

It was slow going in the first term but it was the home side who edged ahead at the first break with two goals and four behinds to the Bulldogs’ one goal and two behinds.

The Blues’ lead had improved to 12 points by half-time and their best quarter for the day came in the third with five goals and one behind setting them up with a 32-point buffer heading into the final term.

Ben Jones was the only other multiple goal scorer for the Blues and finished with two while singles went to Alex Whitehill, Rohan Diamond, Frazar Brouns and Adam Mitchell.

The Tigers appeared in with a shot in the first term, behind by 13 points, but all hopes were quickly dashed when play resumed after the first break and Glengarry stretched their lead to 25 points at half-time.

The Magpies were afforded plenty more chances in the third and fourth quarters, however, inaccuracy on goal with six goals and 10 behinds meant the winning margin was limited to 39 points.

Layne Hetherton bagged three goals for Glengarry in the win while Jordan Symons, Tom Harris, Andrew May and Nick Quenault each scored two.

For Gormandale, their loss to Glengarry on Saturday was their first by less than 100 points this season.

The defending premiers set the tone from the first bounce, peppering the score board with six goals and five behinds to lead by an ominous 32 points at quarter-time.

It was more of the same in the second term and the Demons added another five goals and three behinds to the Saints’ one goal and one behind to extend the margin to almost 10 goals.

The lead remained the same at the last change, however, Yarram put their foot to the floor in the final term with only inaccuracy on goal – four goals and nine behinds – preventing the margin from blowing out past 100 points.

Lukas Jenkins got the spoils and finished with six goals for the Demons, Jake Mcfarland kicked two and singles went to eight others.

Among the best for Yarram in the win were Griffin Underwood, Chris Bruns, Dan Vardy and Tyler Chisholm.

Heyfield were made to rue their missed opportunities at the weekend after squandering a lead at the last change with six straight behinds to fall to a fast-closing Cougars side, 11.9 (75) to 8.15 (63).

In a seesawing clash the Cougars burst out of the blocks in the opening stages of the game and piled on four goals and six behinds to lead by 23 at the first change.

They added two straight goals in the second to Heyfield’s two goals and five behinds, their buffer cut back to 18 points at half-time.

The Roos found their kicking boots in the third and added five goals and three behinds win the term and earned an eight-point lead at the last break.

Their inaccuracy came back with a vengeance in the last quarter, six straight behinds not enough to stave off a classy, rampaging Cougars outfit with four quick-fire goals to snatch the win by 12 points.

Chris Williams, Leigh Mcdonald and Ben Kearns all finished with two goals each for Churchill in the win, as did Charlie Driffield and Kodie Woodland for Heyfield.

The Bombers trailed by five points at the first break after an action-packed opening quarter and had fallen 13 points off the pace by half-time.

Trailing by 10 points heading into the final term, TTU came teaming home with five goals and three behinds while holding the Wildcats to one goal and one behind to snatch the win.

Hayden Willaton booted five goals for the Bombers in the win, Michael Duncan three and singles went to five others.