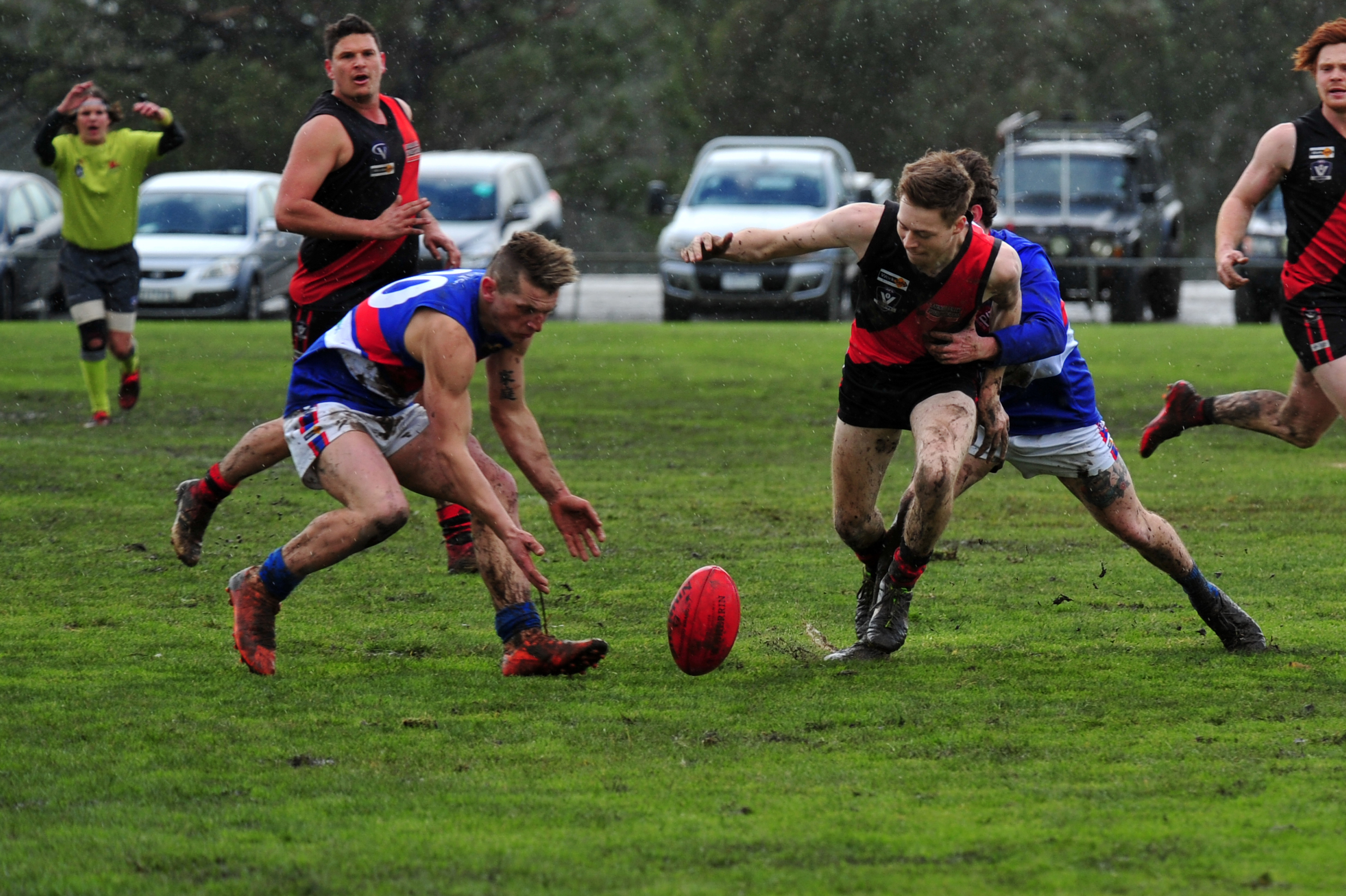 A scrappy wintry mud heap didn’t stop the scoring run of Traralgon-Tyers United on Saturday as the Bombers easily accounted for Sale City, 13.8 (86) to 2.8 (20).

The home side wasted no time stamping their mark on the game, piling on four goals while keeping the Dogs to just three points in an impressive cursor of things to come in the tough conditions.

The Bombers added another four majors in the second term while again limiting Sale City to minor scores to lead by 48 points at half-time.

The visitors finally found the scoreboard for their first major of the day in the third term but the flow didn’t slow at the other end with the Bombers adding another three to their tally to increase the buffer to 61 points at the last change.

TTU added one more in the final term while Sale City also scored a consolation goal to go down by 11 goals.

Guy Sinclair led the way for the Bombers on goal and finished with three while a trio of other – Hayden Willaton, Michael Duncan and Darcy Barnes – kicked two each.

Among the best for TTU in the win were Sinclair, Barnes, Tyler Mustoe and Kade Duncan.

For Sale City, Nick Grainger kicked the only two goals.

The decided mismatch between ladder leaders Churchill and cellar-dwellers Gormandale didn’t throw up any surprises with the Cougars cruising to a 120-point win, 18.20 (128) to 1.2 (8).

The luckless Tigers’ first and only goal for the day came in the opening term while Churchill added four.

The visitors could do little more than watch as the Cougars added six goals in the second term, five goals in the third and another three to close out the game.

Chris Williams, Blake Slater and Ben Skinner enjoyed the spoils for Churchill in the win and finished with three each while Allan Chandler kicked two and singles went to seven others.

Tyson Kavanagh was Gormandale’s only goal scorer for the day.

Williams, Chandler and Travis Brighton were all standouts for the Cougars in the win.

The Roos struggled in the opening term, managing three behinds from as many scoring shots while the Demons added three goals and two behinds to lead by 17 points at the first break.

The hosts found their feet somewhat in the second term, converting two straight goals while Yarram added two goals and three behinds to stretch the lead to 21 points at half-time.

The Demons’ lead stood at 25 points at the last change and a late comeback with three goals saw the Roos fall just nine points short at the final siren.

Among the best for the Demons in the win were Underwood, Ben Vardy, Louis Rodaughan and Liam Farley,

Cowwarr provided a minor upset and flattened the hopes of a top-three finish for Rosedale with a thrilling one-point win on Saturday, 8.9 (57) to 8.8 (56).

The Saints were shaken in the first term, managing just a single behind while the Blues appeared to have the slight edge and added two goals and one behind to lead by 12 points at quarter-time.

The hosts bounced back in the second, winning the quarter with four goals to one and snatching the lead in the process to stand five points in front.

Another swing in momentum turned the game on its head in the third, Rosedale kicking four goals to Cowwarr’s two, to once again switch up the lead and hold a 10-point advantage at the last change.

The Blues’ single major in the last term was enough to stave off the Saints despite their two goals and five behinds. Luke Cooper and Shane Morgan kicked two goals each for Cowwarr while Matt Royal was the Blues’ only multiple goalkicker with two.

Rosedale sit in fourth spot on 10 wins, two games off the pace of TTU in third.

The Magpies kicked their first and only goal for the day in the first term.

Among the best for Woodside were Missen, Fulton, Kennedy and Tom Crosby.