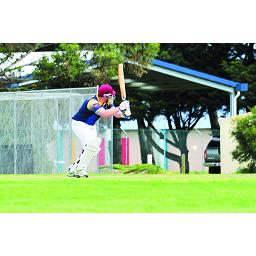 Traralgon West and Jeeralang-Boolarra played out a high-scoring match which included a couple of centuries while Moe continued its perfect start and Centrals fell to the Ships.

There was 477 runs scored at Traralgon West Sports Complex in the highest scoring fixture across the top two divisions. It was the home side which came out on top after a fine run chase.

Jeeralang-Boolarra batted first and the side only managed 38 runs from its top five batsman. Captain Ben Heath came to the wicket where he was joined by Mark Rawson and the pair put on a 145-run partnership before Heath went for 44. Rawson continued with the tail to post an eye-catching 126 off 87 balls. Ethan Page was the main wicket taker with three, but it came at a cost of 70 runs while Nilantha Thillekarathna’s two-for came for just 14 run off 10 overs.

The Eagles were in no rush to run down the sizable score with Thillekarathna the anchor in the side’s innings.

He scored his maiden LVDCL century on his way to piling on a near run-a-ball 143 not out. The main support came from Brenton Howe (43) and skipper Tim Fitch (30) with Traralgon West reaching the target with 21 balls remaining.

After the match, Heath lamented the Panthers poor execution in the field as one of the main reasons his side couldn’t get the win.

“The top order didn’t quite do their job, the middle order dug deep with myself and Mark putting on over 140,” he said.

“The bowling started nice tight line and length but unfortunately we strayed away from that and their batsman got on top of up.

“Our fielding let us down and that is something we are going to have to work on in training.

“We were confident we would be able to defend (237) but unfortunately our fielders didn’t quite back up our bowlers and we missed a few opportunities but they batted very well.”

Home turf advantage wasn’t enough for Yallourn North to knock off the unbeaten Lions with Red and Blacks bowled out for a measly 103. Chris Sotiropoulous proved capable with a decent 39 before he was bowled by Andrew Philips while Izaiah Lange was the only other noteworthy contributor with 17 – one run better than the extras. Luke Sumner took 4/20 taking his wicket tally for the season to nine.

Sean Spiteri was out for a duck as Moe took its time with the bat. Andrew Philip was the main man in the run chase with the quality batsman putting on 38 runs.

The Lions secured the win a ball before the end of the 41st over.

Trafalgar made the most of a rain-effected match to upset Centrals at Joe Tabuteau Reserve. The Ships chose to bat first before posting a defendable 182 for only three wickets lost. Young gun Aydan Connolly came in at three to post a career-best 75 while opener Liam White (40 and skipper Rhys Holdsworth (29) also scored well.

Centrals run chase started off terribly with Corey Pollard going for a duck. Robert Wilkie tried to steer the visitors in the right direction with his 42 but wickets were falling too frequently and runs too sparsely with rain bring the match to an end with the Lions at 3/83 – short of the required run rate. Jackson Noonan was the pick of the bowlers with the quick taking a wicket and conceding just nine runs off his six overs.