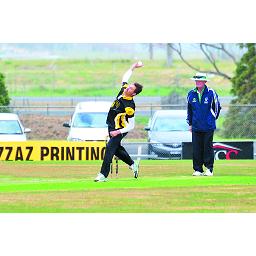 The newly-introduced Duckworth-Lewis method played a part in the result of the round with Mirboo North getting over the top off the Raiders. Elsewhere Morwell secured its first points of the season and Churchill continued its winning ways.

Mirboo North took full of the impending rain by winning the toss and putting the visiting Raiders into the bat. The Raiders scored 152 with Chris Stanlake 83, backing up his match-winning 86 in round two. Skipper Liam Maynard (11) was the only other batsman to reach double figures. William Cheatley was the best with the ball taking 4/30 while Dean Musther and captain Jesse Van Rooye both picked up two scalps.

With inclement weather on the way, the Tigers rushed to put on 91 runs for the first wicket with Cheatley retiring on 54 and Jesse Giardina scoring 36. Players came from the field three balls into the 23rd over with Mirboo North’s 2/132 more than enough to see them take the win. Jack Howarth was the only Raider to take a wicket.

Van Rooye said the weather played a significant role in how his side approached the match adding it’s the best way to ensure matches end with a result.

“We won the toss and decided to bowl first because we thought weather would play a part with the Duckworth-Lewis system,” he said.

“I think it can be hard to understand but the app which is set up works well and I think it is fair for both teams.

“In the end it helps get a result rather than there being a wash out and a dead game.”

Morwell sent CATS into bat and it was a decision which paid off with the Tigers bowling tight and taking wickets to dismiss the opposition for 103 with 44 over bowled. Callum Stewart was the main resistance notching 27 while Robert Webber took a season-best 4/14.

Webber’s man of the match claims were dented when he was out for a duck with fellow opener Mark Cukier going just one run better. Morwell were six down with only 32 runs on the board before Robert Semmler (21) and Luke Gettings (36) steadied the ship with the side stumbling over the line eight down.

Tinashe Panyangara was crafty with the ball, taking out half of Morwell’s top six.

Latrobe won the toss and after losing both openers for a run between them, managed to put on a moderate 171 from the full 50 overs.

Ryan Harvey was destroyer in chief, taking the top two poles on his way to 5/33 while Steve Warr snagged two-for.

Churchill lost Warr with only five runs scored but from there, the Cobras controlled the run chase with John Keighran’s 66 off 55 balls backed up by a 36 from Brendan Mason and a 26 from Riccardo Velardi.

Churchill finished the match off halfway through the 36th over to become the only side with a perfect record after three rounds.