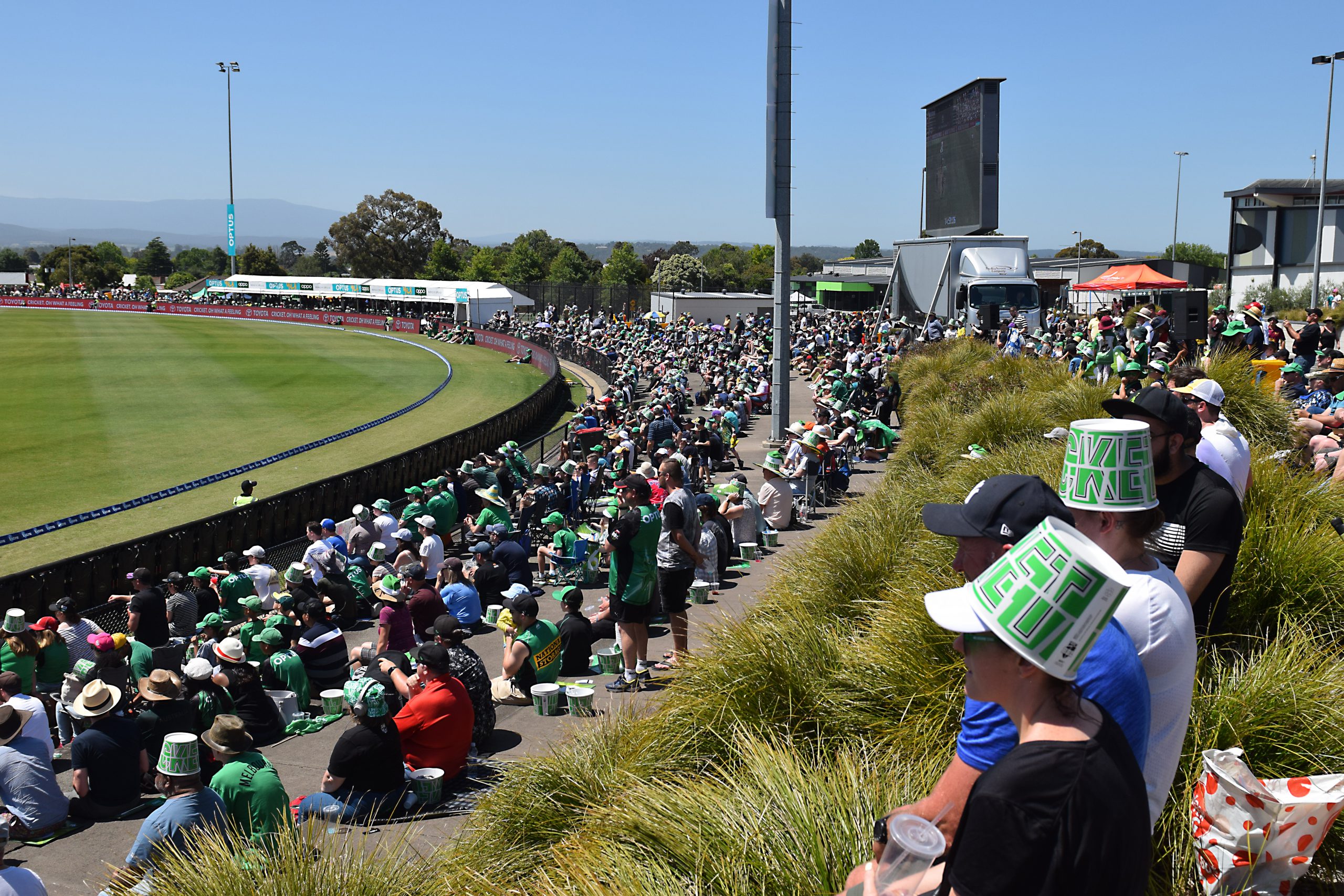 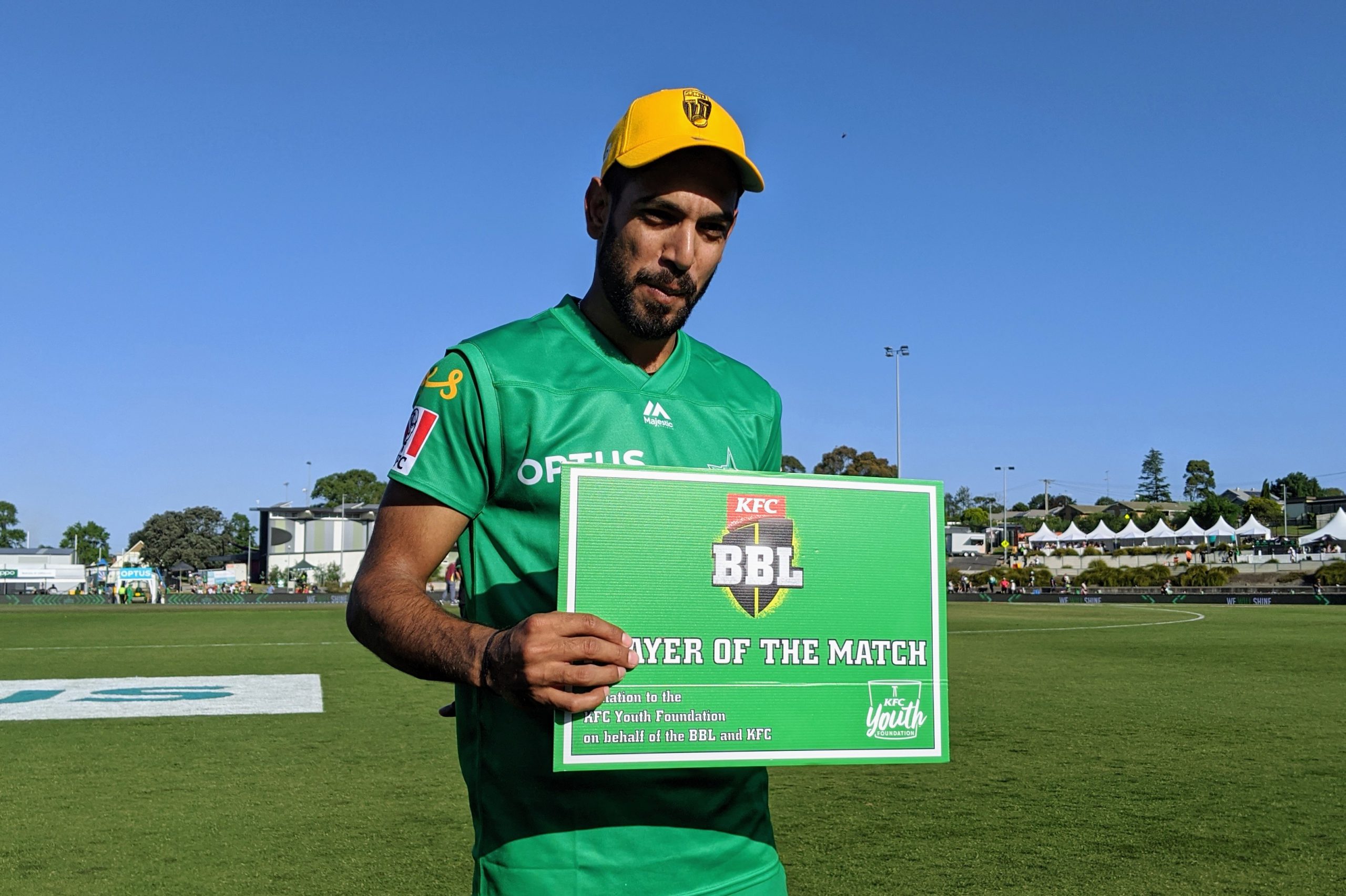 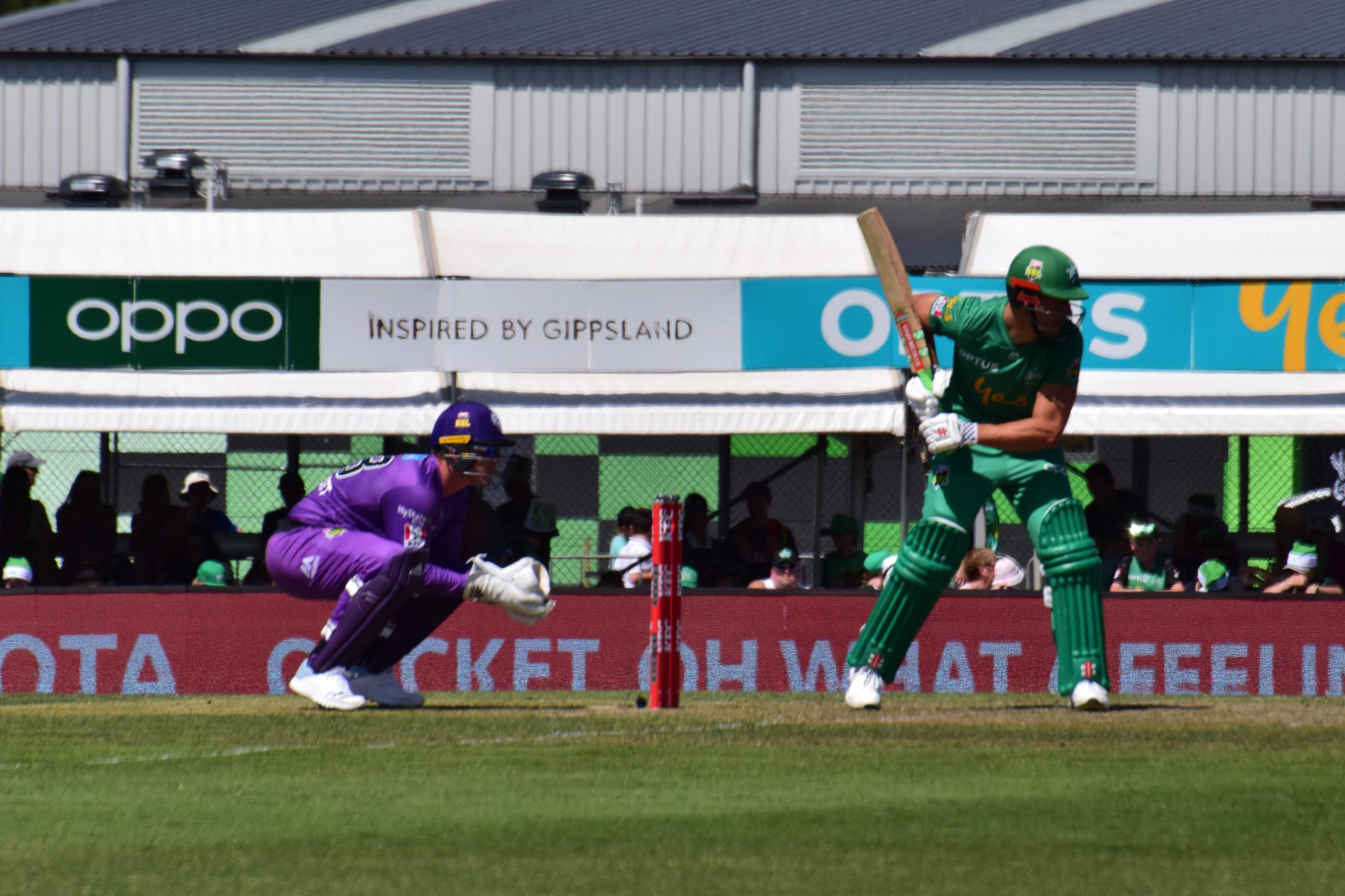 Haris Rauf was the name on everyone’s lips leaving Ted Summerton Reserve on Sunday afternoon with the little-known paceman the difference in Melbourne Stars’ win over the Hobart Hurricanes.

The crowd of 6180 were expecting big things from the likes of Glenn Maxwell and D’Arcy Short, but it was the unheralded Pakistani quick who stole the show with 5/27.

The blistering spell of express bowling helped the Stars defend 4/163 by bowling its Tasmanian opposition all out for 111.

The Stars recruited Rauf a day before its season opener against Brisbane Heat due to big-name signing Dale Steyn’s ongoing side strain injury issue.

Rauf took 2/20 against the Heat on the Gold Coast, a far cry from Glenorchy Magpies in the Tasmanian Premier Cricket competition from where the Stars signed him.

After the match, an elated Rauf, through the translation of teammate Sandeep Lamichhane said he was delighted to be involved in the Big Bash, adding he had to work hard for his wickets on the Moe pitch.

“It was a great opportunity,” he said.

“I am only focusing on doing well and I thank everyone for giving me this opportunity.

“The wicket was a bit damp and a bit dead, so I was just trying to bowl into the wicket because it was keeping low in the middle overs so that was my plan.”

Rauf explained his career to date and where he hopes his BBL exploits will take him.

“I was given the opportunity through Lahore Qalandars through their development program and from there I came to Sydney to play for Western Suburbs.

“The Twenty20 World Cup is coming very soon in Australia, so I am trying to get fit for that and hoping to represent my country Pakistan. That is my only dream, to play for my country.”

The 26-year-old has given Stars coach David Hussey plenty of selection headaches with Steyn ready to make his debut in the side’s match against the Adelaide Strikers on Friday.

“He is the priority, I think Steyn is all above.”

The Stars got off to a flying start with Nic Maddinson and Marcus Stoinis putting on an 81-run opening stand, but not before Stoinis was dropped by Clive Rose on his first ball faced.

Maddinson was the first to go for 40 when he was caught by Simon Milenko off the bowling of Riley Meredith.

Ben Dunk, who was player of the match with 72 not out when the Stars previously visited Moe in January, was next in and next out, bowled by Qais Ahmad for 19.

Skipper Glenn Maxwell and Peter Handscomb failed to make an impact with two and three runs respectively before Hilton Cartwright joined Stoinis at the crease to push the Stars to 4/163.

Stoinis staked a claim for a starting spot at next year’s World Cup with an unbeaten 81 off 54 balls.

Cartwright finished not out on 13.

Meredith was the best of the Hurricanes bowlers with the tall Tasmanian taking 3/27 from his four-over spell.

Hobart started promisingly before danger man D’Arcy Short was gone for nine with 30 runs on the board.

Short, who led to competition for runs last season with an average of 67.62, succumbed to the spin of Maxwell with Dan Worrall taking the catch at square leg.

Ben McDermott (5) was the first victim of Rauf with the Hurricanes captain pulling a shot to Dunk on the full before Maxwell capitalised on a rash shot from David Miller to bowl the South African for seven.

Opener Caleb Jewell was eventually dismissed for 25 when he top-edged the ball to Clint Hinchliffe in the deep leaving Hobart at 4-57.

The next four wickets fell for seven runs with Rauf taking three scalps in the 11th over.

Nathan Ellis and Rose dug in to take the score close to the century before Rauf clean bowled Ellis for 12.

Maxwell and Zampa finished with two wickets each, Lamichhane took 1/18 but it was the Pakistani paceman who was the hero of the day with his pivotal five-wicket haul as the Stars made it two wins from as many matches in Moe.